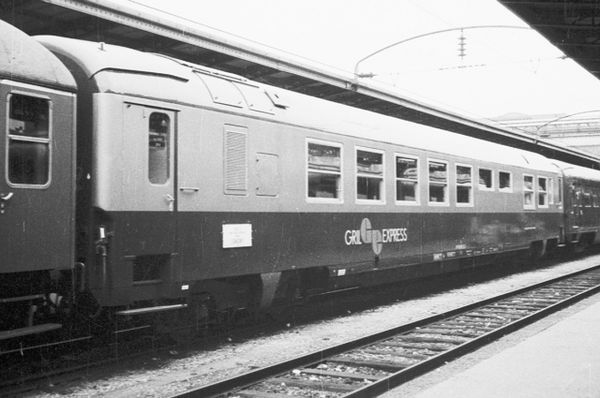 The painting is too matt for my taste, but perhaps it is a reminiscence of the Jouef model of my youth. There is a paint defect on the body bottom near the end where there is no access door.

The window frames, and especially the screws, are much better treated than on Roco’s. Unfortunately, the horizontal bars at half height are more or less deformed, as well as some of the top. This is due to non-eliminated moulding burrs. It might have been better for the frames to be moulded in one piece with the glazing. The small handrails next to the doors are moulded, as on UIC Roco! Inside, the shelves of the self service room are very deformed, this is visible through the windows and will be seen even more when the lighting will be installed.

The bogies keep the step holes of the Grand Confort coaches, useless here. There is no real 3-point suspension: there are two points of support on one side, but on the other, the bogie is not free in roll. As for the Rapide Nord, there is a difference in height — albeit much less accentuated — between the two ends, due to the presence of the pseudo 3-point suspension bosses.

The axle rotation is not very good, despite the presence of brass bearings, because there is no clearance on the axles. The wheel flanges are not thin: 1 mm.

As indicated by Renato on the Loco-Revue forum, a drawbar squeezes in rotation, but this time, the Profi couplings fit seamlessly into the NEM boxes.

Disassembly is quite easy, and you should not spread the body from the chassis: almost sure to break holding clips. Rather start the separation to one end, the snaps not being strong.

Towards the end of the 1970s, they were put on the Corail livery. The most recent ones were withdrawn in 2001. Some of them were sold abroad, particularly in Belgium.