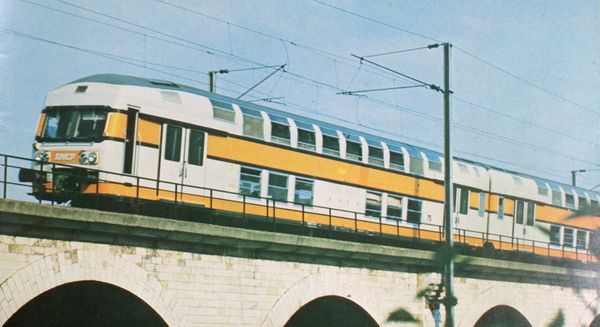 Two 2nd class coaches were bought new in early 2015 to complete the train. Other references released at the same time have no interest, since they combined each time two coaches, including one end coach. Choice really hard to understand. At last, one Be and one ABe purchased end of 2018 to get a complete eight-coach train.

Wheels ø 9.8 for 840 real, good. The current pickup is done on wheel inner shoulders very unattractive but fortunately almost invisible from the outside.

Spring buffers — useless since the contact between coaches is done by the gangway rubber joints!

In general, these coaches run rather badly, due to the lack of clearance of the axles. In the 2015 series, these axles are a little shorter, but their tips are of poor quality: no finish, no rounding.

The first bogie has received Piko axles, while the second still has its original ones. The initial slope is about 1 %, and there is no special effect!

The VB2N (Voiture de Banlieue à 2 Niveaux) trainsets, equipped with a cab for reversible driving, were — and still are — used on the Est, Nord, and Ouest suburbs (St Lazare, Montparnasse). They usually consist of six, seven or eight coaches (this depends on the time, on the starting station and on the type of loco for hauling).

They were hauled in the Nord region by BB 17000 in green or “concrete” livery.

The first line equipped on the Nord was Aulnay-Mitry.