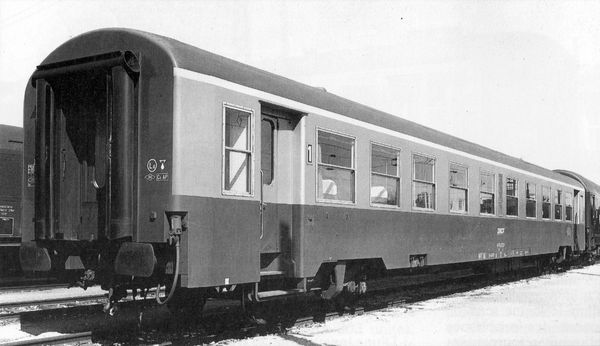 This is the first series of USI coaches designed by LS Models in collaboration with Heris. Moulded stunted handles. Bogies whose pivot is off-axis and which don’t have a rotation stop turn easily perpendicular. The electric jumpers have a funny look. The compartment interior windows sides are not vertical.

Body too low, wheelbase too short of 7 mm! I don’t understand this: the wheelbase has certainly been shortened to facilitate running in curves. But wouldn’t it have been favoured as well by respecting a more correct chassis height?

The coach has in its middle four classic compartments six seats each, framed at the ends by rooms with central corridor. In these, the seats have three-position reclining backrest. This explains the pitch of the windows, wider in the middle than at the ends. The B10t 2nd class coach body shows the same configuration, although it is not necessary in this case.