Very favourable first impression. The colour seems correct to me. The engraving is very fine (rivets, towing hooks, etc.). No part remains to be assembled, apart from the electrical connection boxes under the buffer beam, which I have not succeeded in assembling; I did not insist because they are not very visible, just like the dummy coupling hooks.

Mechanically, nothing to say: the bogies swivel well, the coach runs well, the drawbars have no hard point and the Profi couplings fit easily into the NEM boxes. The back-to-back wheel distance is 14.4 (NEM 14.5 ± 0.1); the flanges are 0.55 mm high.

For once, there is an intelligent current pickup system (already used by Fleischmann and Roco) by metal bearings and insulated half-axles, the only drawback being the insulating sleeve on the axle, which increases its diameter (2.9 mm). The electrical connection between the bogie and the body is made by strips which arrive under the roof, ready to connect to a light strip.

The scale is very well respected. Quite exceptional, the height is the same on each end and, moreover, exact!

On one side, the marking plate under the chassis is shorter, to allow the bogie’s rotation. But the inscriptions are duplicated, as if the pad printing machine had printed it twice. See the photo. However, another plate of right length is provided in the spare part bag, with correct pad printing. The bag also includes hooks, with and without shackle, pneumatic and heating hoses, electrical connection boxes (one is missing) and only one folded bellows, with the corresponding holders. In fact, there are three for the three coaches in the set, so only one per coach. Too bad for people who display their models.

The roof is easily opened, allowing you to discover a fitted bar, with stools, percolator, etc. The counter even has a support bar. See the photo. The luggage racks of the compartments are a little deformed and however not very thin, but so little visible… See the photo. 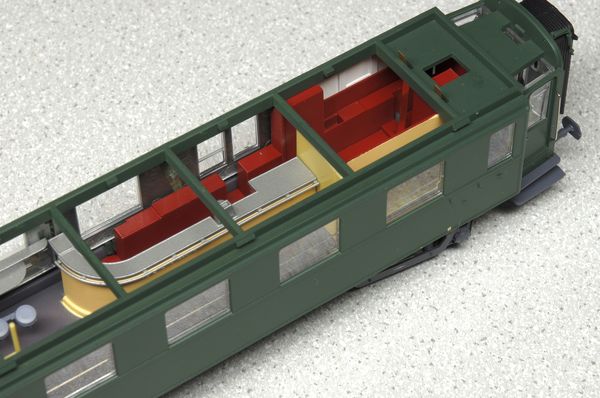 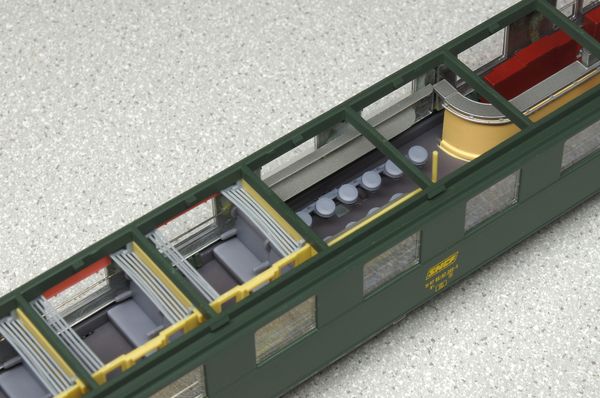 Speaking of things that are hard to see, the leaf springs of real couplings are shown under the seagull wing… Here is a view of the brake components. 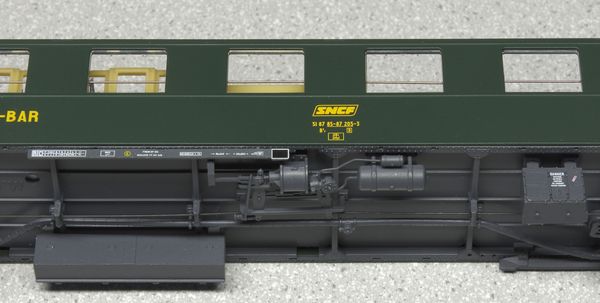 Overall, this coach is expensive, but, apart from the little hitch of the aforementioned marking printing defect, which is invisible to the naked eye, it doesn’t suffer from any real criticism.

Coaches built in 1931 by Entreprises industrielles charentaises (EIC) in Aytré for the State railways, with the aim of transporting travellers to Le Havre and Cherbourg harbours, hence their nickname Transatlantiques. Of two different types (A4yfi and A2syfi), 25 for each type, these coaches underwent many modifications and allocation changes during their career.

These coaches are perhaps the only OCEM authorized at 150 km/h, because they have been fitted with brake blocks made of composite material.