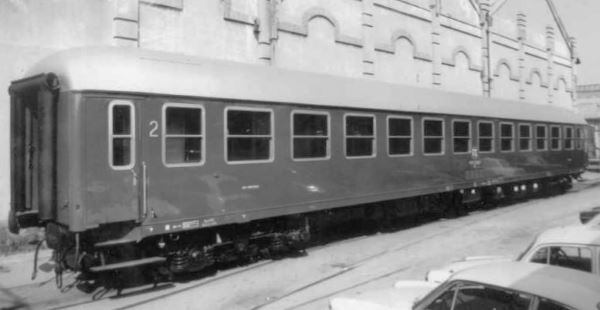 No electric heating cables, despite the presence of fixing holes (and these cables actually exist, of course). The drawbars have too much clearance in the elongation system (about 1 mm). The handrails are coarse and square instead of round or flat. The steps are too thick. The doors are too small; probably an approximation to use the mould of a more recent version.

The seats have two places twice, so four, while the UIC-X have seats of three places in second as in first class. Photo © Roberto Galati. The lighting gives an orange light sodium-vapor-like; there are twelve LEDs centered on the compartments. The light intensity is much too strong. Consumption 190 mA.

Type 1968 coaches, built in 218 units and put into service between 1970 and 1972. The small white triangle on the body ends indicates that the coach is suitable for 3000 V electric heating.

There was also such a coach along with an ABz in the Dunkirk - Basel train that I used to take in 1973 to go from Lille to Nancy.