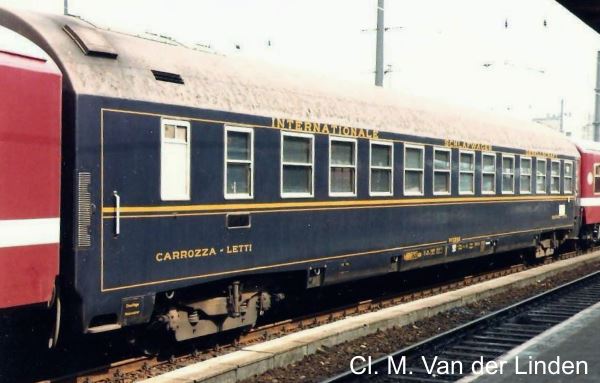 As on previous MU ACME, the roof is moulded with the body. The scale is almost perfectly respected. The three coaches have specific details (length of the handrails, heating cable housing, various grids, etc.)

The height is consistent. On the other hand, the mass is a little too strong.

Steps and CIWL badges are in photoetched metal. The compartments are in night position, the ladders are in place, but not correctly positioned according to Dirk Frielingsdorf on wagonslits.de. Some (blue) blinds are more or less lowered. The little FIAT car handles are to be mounted, and it’s a little tricky… The buffers are on spring, and, of course, they get askew…

On the FIAT car, the Y24L bogie wheelbase is marked 2.3 m, whereas it is actually 2.5 m (however, this dimension is well respected on the model).

The bogies are equipped with current pickup strips rubbing on the axles, which makes the rolling quality rather random; the Y24L bogies are equipped with brass bearings, while the Minden are not. The wheels have a correct diameter of 11.0 mm, but their spacing is a little low compared to the NEM 310 standard (14.3 instead of 14.5 ±0.1). Flange height: 0.8 mm. Axle length: 24.3 mm.