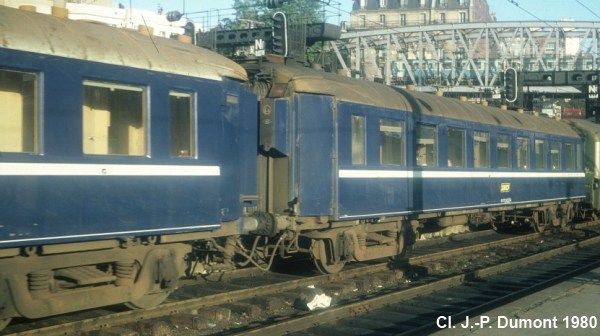 Excellent respect of scale, including the height, which is rare.

The railings are mounted, the steps and the gangways are hinged. The dynamo belt is articulated on the bogie chassis. Folded bellows are provided, as well as curtains (glossy!), beds and ladders. The bogies are well detailed: two-piece side beams, leaf springs extending inwards…

The window panes are badly fitted into the body because of a too thick glue. The roof of the TEN versions is immaculate white, which harms realism. See the photos of the Night Ferry website and of J.-P. Dumont (links below).

Quotation of Pierre B in the Loco-Revue forum, p. 4.

The car at the top (No. 3798, Ed), in traditional livery but without CIWL badge, dates from 1977 until the end of the Night Ferry in 1980. Indeed, at the end of 1976 the Night Ferry sleeping cars stopped being exploited by the CIWL and were leased to SNCF on behalf of British Rail. In 1977 three cars were repainted in TEN livery (without TEN logo), so like the middle model (No. 3984, Ed), and, also in 1977, other cars received a SNCF logo while retaining the traditional livery CIWL. So the three L.S. Models cars illustrated correspond to the Night Ferry from 1977 to 1980.