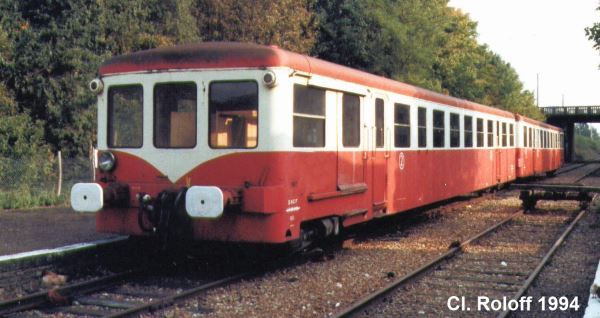 Wheels ø 9 too small: the actual diameter of 860 gives 9.9 to scale. The ideal would be the wheels for TP wagons released by REE in 2016, whose diameter is precisely 9.9: a little too big for the TP, but exact for the unified trailers. But the brake blocks jam. The yellow colour is too dark.

Ref. 45691: the high price is probably due to lighting. There is even a completely hidden bulb which was probably used to illuminate the tail lamps, but there is no light guide! So the bulb only serves for heating (well for passengers in winter!) and to consume electricity.

Ref. 64216: the price is increasing, but not the quality! There are current pickup strips, but no lighting at all (except the light guide). The seats in the luggage are deformed because the body is wrongly mounted. Moreover, the interior fittings were roughly filed in a vain attempt to fit it properly, hampered by the lamp light guides. A point nevertheless positive (hey no, not even, see below!): the fittings are specific to this trailer with a small luggage, with armchairs and not benches. But nothing justifies such a price!

They are often named “Decauville” by misuse of language, the actual Decauville XR 6000 and 7200 trailers having been built just before and just after the Second World War, and having served them as a kind of prototype.

Note that the picture shows a trailer with small luggage compartment; we see a passenger access door right next to the luggage door (probably an XRBD 8100).

This type of railcar trailer represents the most widespread model on the SNCF network. Of lighter construction than the classic passenger coaches, it is intended exclusively for railcar traffic.
All these trailers are similar with some exceptions. They are subdivided into several sub-series according to their interior fittings, their general characteristics being identical.
They are intended to be towed by medium power railcars (from 300 hp (220 kW) up to 825 hp (605 kW) in order to increase the capacity offered by these railcars on certain lines, using the available power.
The possible compositions vary with the power of the traction unit(s) and the profile of the line to be covered — a maximum of 4 trailers can be reached in some cases with one or two railcars.