Respect of the scale: correct, despite the slightly too small wheel diameter (which is explained for the driving wheels by the respect of the spacing, despite too big flanges), and slightly over-dimensioned width and height.

The exhaust sound is frankly a failure: not synchronized with speed, going from one rhythm to another without transition. Not good! And no trial could improve this.

The bogie sides are of the type 37.A and not 38.A (see Loco Revue sheet of Nord tenders, image below). But this picture shows a machine equipped with a tender 37.A. So Roco marked 38.A a 37.A tender? For information, here are diagrams of these bogies (extract from Loco Revue sheet No. 435/436). 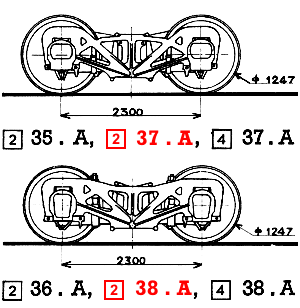 These locomotives are the sisters of 231-E-1 to 20, themselves coming from the transformation of 20 locomotives of the series 3521 to 89 of the PO (Compagnie de Paris à Orléans), transferred around 1934 to the Compagnie du Nord under numbers 31171 to 31190. This transformation, carried out on the principles of the engineer André Chapelon, practically doubled the power of these locomotives, while reducing their coal consumption.

These machines were capable of extraordinary performance, reaching speeds of over 170 km/h in tests. They were mainly used to pull prestige trains, such as the Flèche d’Or (Golden Arrow) for example. However, because of their relative fragility and their expensive maintenance, the 231 K ex-PLM (Paris Lyon Méditerranée) were preferred to ensure the last trains in steam traction between Calais and Paris in the 1960s.