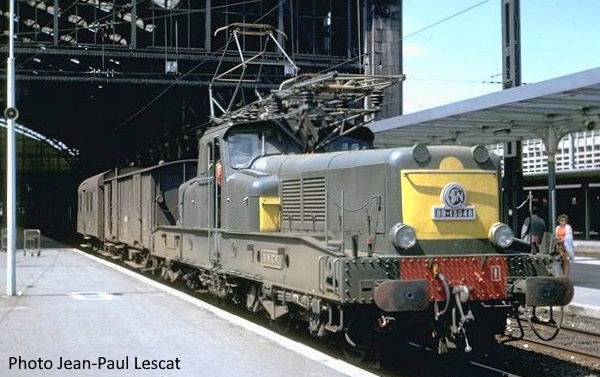 Fine engraving. Contrary to the photomontage provided by Hornby — and fortunately, the machine has no red lights next to the white lights. The respect of the scale is almost perfect.

Some detail parts have to be fitted: electric jumpers and plugs, brake hoses, articulated screw couplings. The latter cannot be configured at rest, with the shackle attached to the buffer beam. The front footsteps are photoetched openwork. There are also parts representing the insulating poles for manual lifting of the pantographs, but they are rather poorly represented (hollow, silvered); a pity for the display (for operators, these parts can interfere with the movement of the bogies).

The pantographs are the same as on the 14000/14100 of the brand; they are fixed by a screw on their support. Unfortunately, the latter is fitted with a central barrel for the screw to pass through, which does not exist in reality, and which will not be very discreet if I remove the screw as I usually do. Inside the cab, blades make contact with extensions of the supports for a possible power take-off from the pantographs, in conjunction with a jumper switch on the PCB.

Trix BB 12000 have been criticized for having secondary suspension springs stuck to the bogie side beams. Here they are correctly attached to the chassis, but this time not set back far enough from it.

The drawbars have no elongation, and are fitted with a dovetail in accordance with NEM 363 (housing for coupling head in case of lack of space). The tightening of the coupling head does not seem to be very effective. Suitable heads are available from Fleischmann under the reference Profi 6570, and from Roco under the references 40281, 40286 or 40287 (“harpoons”). Dovetail coupling extensions are included in the parts bag.

The wheels have decorated side discs. They have the correct back-to-back spacing (14.4 mm).

Electrically, the machine starts at about 3 V (before running in). It consumes 320 mA when slipping, and 950 mA when stalling.

The installation of a 21MTC decoder does not pose any difficulty, except that the dismantling of the body is delicate (handrails to remove, screws rather difficult to reach). The removal of the dummy must be done very gradually, as the printed circuit is quite flexible and may break. The wires connecting the bogies are thinner than the LEDs’. Very logical!

Single-phase locomotives with direct motors, built in 53 units between 1954 and 1961, by (according to the sub-series): M.T.E., Fives-Lille, S.F.A.C., S.L.M. for the mechanical part; M.T.E., Jeumont, Oerlikon, BBC (Brown Boveri), Sécheron for the electrical part.

Main characteristics (the first value relates to the BB 13001 to 15, the second to the rest of the series):

These locomotives have four eighteen-pole AC motors of the “resistant connections” type. Their bogies are of the Jacquemin type.

They were mainly used to haul relatively light goods trains — accelerated speed, (régime accéléré, RA) — and regional express or omnibus trains in the East and North of France. 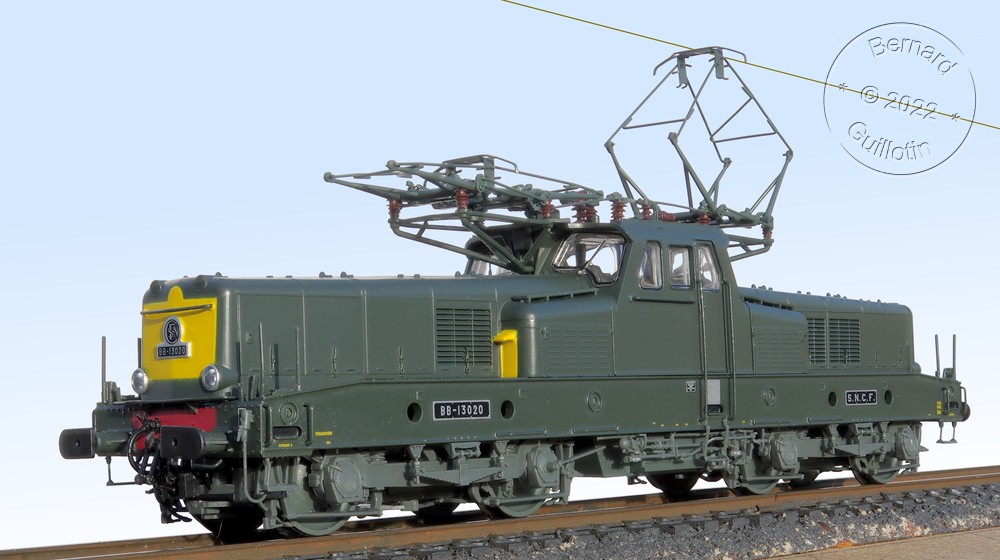