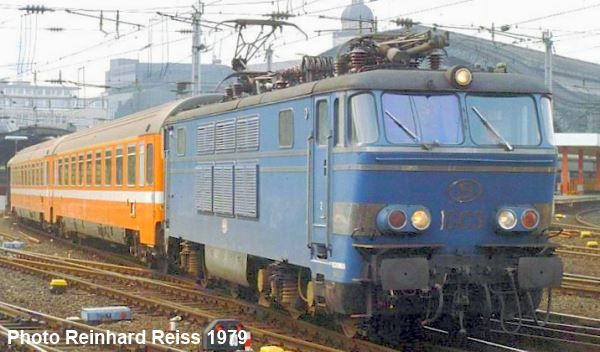 Apart from the roof electrical line and the pantos (rather coarse), all the detailing parts are to be assembled. There is no elongation, and the couplings are fixed on the bogies. The right wheel of the extreme axle in each direction is equipped with rubber tyres.

The front plates (number, “B” logo) are simply painted and not in relief. Similarly, the wipers are simply evoked by moulding with the windows. Handrails and vertical handles are photoetched, so of rectangular, not round, section.

Squeaks and mechanical braking due to the current pickup made of steel string, too hard and already a bit rusty. Corrected by lubrication.

Construction by Ateliers de Construction Electrique de Charleroi (ACEC) for the electrical part and La Brugeoise et Nivelles for the mechanical part. Continuous power: 2780 kW; weight in service: 82.6 t; maximum speed: 160 km/h. For reasons of management and maintenance ease, many parts (including motors) are the same as for the 15 series appeared previously.

Although mainly working on the Brussels - Cologne line, these machines could also be seen in Paris-Nord instead of the SNCF 40100, or NMBS 15 or 18 series.

The 1607 was put out of service and scrapped in 1994 following an accident in Ostend (source: wallorail.be).

The photo of Reinhard Reiss, taken in Cologne, shows that the succession of pantographs, from back to front, is as follows: 15 kV 16 ⅔ Hz (raised), 3 kV DC (grouped with the first), and 25 kV 50 Hz.