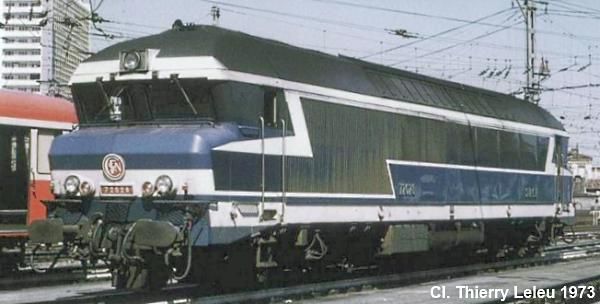 Machine with a sound decoder. No indication on the decoder programming, except the address of the site www.zimo.at, type MX 6462P (not found on the website).

As indicated on the Loco-Revue forum, shiny wheels require a serious weathering.

The headlights appear too big to me, perhaps because of the lack of chrome circle.

The slow motion is very good, so is the traction force: this machine was able to tow 81 wagons without the slightest slip with only one axle equipped with rubber tyres!

Three-phase-to-DC electric transmission: the Diesel engine drives a three-phase alternator whose current, rectified, feeds DC traction motors. The advantage over the conventional solution of the DC generator is that the machine can produce a voltage adapted to the electric heating of the train.

Quote from Renato on the Loco-Revue forum.