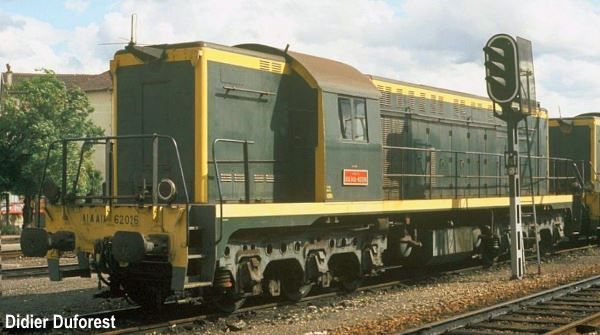 Locomotive delivered with a Lenz Silver 21+ decoder mounted. A little oversized (between 1:85 and 1:86). At first glance, the appearance is correct, except the chains too showy. The cabin has two drivers, one on each side, looking each in the opposite direction. The railings are actually very fragile and are already twisted and with visible repairs, but they fully respect the real aspect: there are round and flat vertical elements, according to reality.

The cabin is poorly adjusted to the decking, which is itself crooked: it lifts to the front left, as shown in the picture at top of the page, which has the effect of deforming the railing.

The actual loco is an A1A A1A, the model is, mechanically, a CC. The right rear wheel of each bogie is equipped with a rubber tyre.

Removing the body is very easy, it even seems that it only holds by the railings at the cabin. The wiring is neat. A quick test makes it easy to find the lamp LED connections. For each light: the common is red; the white LED is connected to the white wire via a 1.5 kΩ resistor; the red one to the brown wire via a 2.2 kΩ resistor. Each of the wires feeding the lighting plates, namely, blue, red, brown, is picked on a connector located next to the included speaker. It should therefore be quite easy to separate the red lights from the white lights (the Lenz Silver+ has five outputs).

These locomotives were extrapolated from American models (road switcher) of BB type, which had been added a trailing axle by bogie to meet the maximum weight per axle in France.

Mostly used in the railyards, they have ensured in Paris the hauling of empty coaches between the Gare du Nord and the Garages du Landy.

The 62030 goes into service on 28-11-1946 in La Chapelle. It spent most of its career at the La Plaine depot, ending up in Lens on 1-06-1993. It is part of the first thirty numbers (first order), which wore the SNCF badge on a large outgrowth above the long bonnet. It was actually the location of the big headlight on the American version.