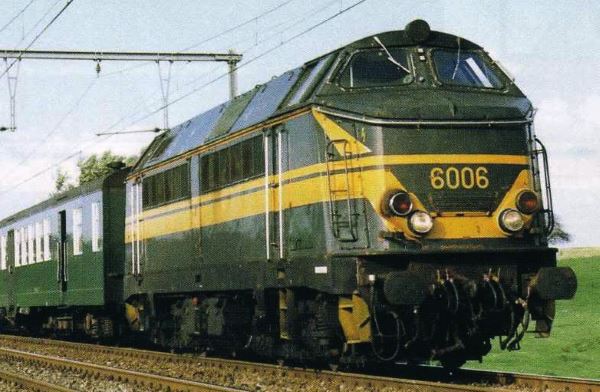 This locomotive is part of the 6001 to 6006 prototypes of the 6000 series. It is in green livery with yellow stripes. Depot of St Ghislain.

Supplied with, as spare parts, skirts much more enveloping, which, according to the photos, were only mounted at the beginning of career, a little like those of SNCF 67400 series.

The machine is very heavy — more than the CC 72000 of the same brand. It has an axle with a rubber tyre. The elongation drawbar can be easily removed, if necessary, with four screws.

I don’t know the actual series well, so I will not give an opinion on reproduction. I simply note that the wipers are too long compared to the windows, and that the light fairings seem too big to me! The dimensions are well respected, except that the loco is a little too wide and a little too low!

I missed a Belgian Diesel machine to tow a train of M2 coaches that has long run between Tournai and Lille. I understand that it was rather 51 or 62 Series that were responsible for this task, but, while waiting for the Van Biervliet model of the same era, I will be satisfied with this one, especially since I don’t currently have M2 coaches…

See gamos81.altervista.org for the reference list of issued Series 60 models.

Visually, this machine can easily be distinguished from the series that followed by white and red lamps arranged along an oblique axis, while on the following ones, they are horizontal.

These locomotives have an almost invisible feature: their cantilevers are asymmetrical: 3.925 m on one side, 4.165 m on the other. And Roco respected this Belgian curiosity!

They are here now too !