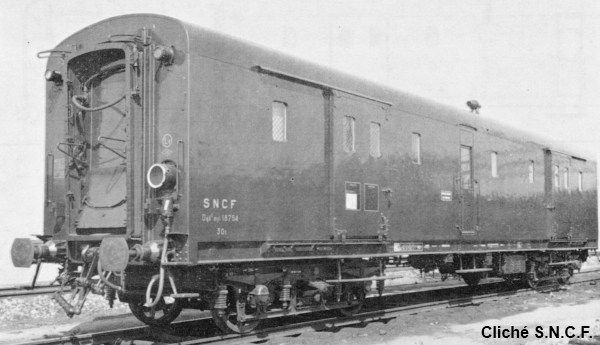 Vehicle too short about 5 mm. In this regard, I don’t understand this obsession of shorten­ing, which could be justified on a long vehicle (to avoid excessive overhangs on curves too tight), but five unfortunate millimetres on a short vehicle? Maybe it was in that time design­ers’ collective unconsciousness, impregnated by ultra-shortened Hornby toys, at the O gauge (let’s not speak of scale!), of the 1930s to 1950s?

Hornby made the effort of switching to UIC numbering when it appeared, but they forgot to modify the painting that should have been completely green, including the roof and the ends.

In the 1970s, I had equipped this van with WL bogies with a tin frame and moulded flanks after those of Romilly Jouef. I have since reassembled the original bogies because the flanks of the WL were taking off (photo).

Decidedly, luggage vans are missing in the current industrial production (2016). Neither this one, nor the 2-axle Nord Dd2, nor the bogie Nord Dd4, nor the Sud-Est B4Dd, exist, while all these models (the Nord Dd4 to a lesser extent) were omnipresent in the Nord and in the Est in the sixties to eighties.

As a result, and for lack of anything better, I still use this van in my Nord-Est compositions.

See this topic on Loco-Revue forum.

These luggage vans result from the metallization of former Dy vans from the Est, Sud-Ouest and Sud-Est, carried out from 1951 to 1957 at the Romilly SNCF workshops and at the Société Lor­raine des Anciens Établissements De Dietrich in Lunéville.

Among these vans, 52 have a lateral corridor (Dd2s), 120 have gangway with bellows but without corridor (Dd2), and 9 have a postal compartment (DPd).

According to its number and EC64, the Hornby van would be of Sud-Est origin. This is a Dd2, i.e. without gangway.