Do not expect to immediately get images of satisfactory quality directly. The original slides are often badly exposed, sometimes damaged: I have some whose colours have turned, or having coloured spots, when not mould! And there are inevitably specks, small dust spots stuck on the emulsion, especially near the edges.

Depending on the slide conditon, the quality sought and also the operator patience, there will be several levels of corrections to be made, corrections which will concern the following points:

Here, there is no miracle. We need:

We often tend to work on very enlarged images. But the more we enlarge, the more we’ll find these small dirt, some of which are almost invisible on a reasonable enlargement. It is therefore better not to enlarge too much and to correct only the bigger ones.

I believe there are software that can fix the specks. But be careful to delineate the area of action, otherwise interesting details (e.g. tree leaves) could be taken for dirt and deleted from the image!

Cleaning is the treatment to be made first, because one is sure not to regret it; it would be a pity to work on “dirty” images.

Here is a treatment not too complicated to do. If you have in the image one or more areas that seem to you of a neutral grey, you extract the colour with the pipette tool, and you transmit it to the correction function. This is sometimes disappointing, either because the zone in question is not neutral, or because there has been a different drift of colours depending on whether they are more or less clear or dark.

In some software applications and some cases, the use of the Automatic Levels tool can yield interesting results.

Here, it gets complicated and you have to be very motivated. I recall that I do not use Photoshop which surely has very powerful tools for this kind of corrections. I’m satisfied with the Levels and Curves tools. In the case of localized corrections, one thing must be avoided: no sudden transition at the boundaries of the treated areas.

Cropping is ultimately the easiest operation and may improve the images much, since it was obviously impossible on the original slides. No more the sloping marine horizon or a misplaced dustbin in a corner of the image!

For many years, I’ve been using the Agfachrome film, which was easy to process by an amateur. But this emulsion had a rather coarse grain. On the digitized images, this grain is very visible (proof that the focus is correct!). For me, it is not embarrassing, except for the sky: a sky composed of agglutinated grains is generally not of the best effect. I therefore apply a slight blur in this case; it is still necessary to delimit correctly the area to be processed and it is neither easy nor fast.

Here is an example before / after processing of a small extract in full size (100%, on 10 Mpx sensor) of an Agfachrome slide. I must clarify that the film was processed by an Agfa laboratory, not by me. 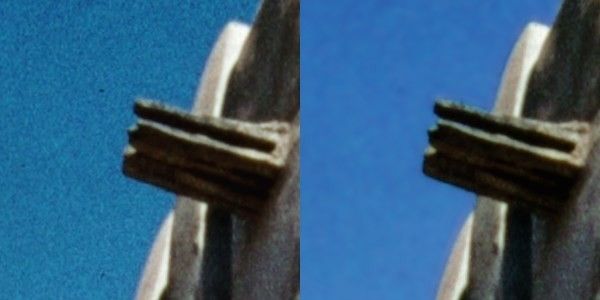 Small game: will you find in my photo galleries the image which this excerpt comes from?