A page of nostalgia? Maybe, maybe not! Because I still use some of this equipment. Not the bodies: I would need film, which certainly still exists, but not easy to find, and a laboratory to develop it. Digital has made things so much easier.

On the other hand, some lenses, yes! Some even become better, take my word for it, on a digital body than they were before! I don’t doubt that their modern equivalent is more efficient (though...), especially thanks to the autofocus. But for the static photo, this advantage is not decisive.

My first SLR camera was a Zenit-E made in USSR, with a Helios 44 f:2/58 mm lens. Pros: it was the cheapest SLR camera, its lens, copied from a Carl Zeiss German model, was very good. In addition, the ø 42 mm screw mount was wide-spread at the time, which allowed me to equip with a 200 mm Takumar of Asahi-Pentax. Disadvantages: the camera was heavy, sometimes lost parts, and had only an external cell.

I sold this device a long time ago; the following photo was found on the Internet. 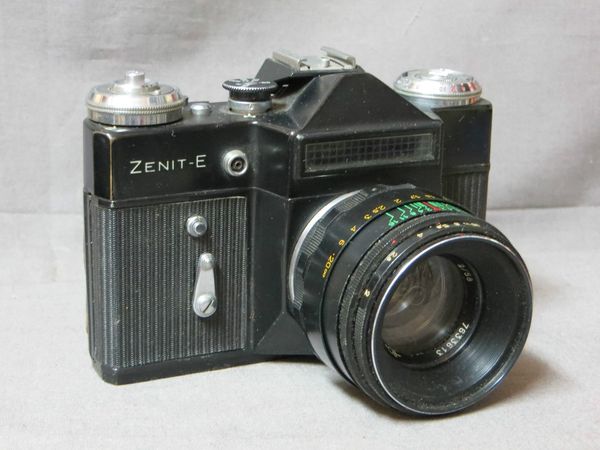 This camera was the direct descendant of the Spotmatic, which still had a screw mount. With the series KM, KX, K2, Pentax went to the bayonet mount, the famous K mount that still exists today, proof of an excellent design.

When I wanted to equip myself, I hesitated for a long time between this model and its direct competitor, the Minolta SRT 303, with extremely close characteristics. The ease of changing lens finally made me prefer the Pentax. It should be remembered that at the time, the zooms did not practically exist, or so with a quality much lower than the fixed focal length lenses.

The KX is the mid-range model, with a silicon TTL cell, when most of the cameras are still with cadmium sulphide (CdS) or even selenium; it has a semi-automatic needle coincidence exposure system, a microprismatic focus, and the possibility of seeing the diaphragm opening in the viewfinder through a small window under the prism (only at daylight!). 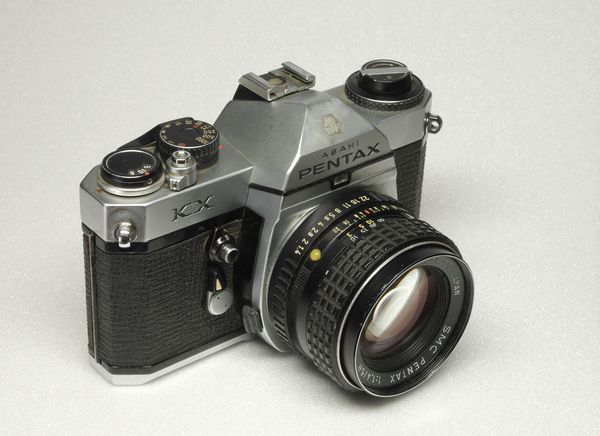 The Pentax KX equipped with its original lens, a 50 mm f:1.4. A much more expensive f:1,2/50 was also available. Note the raising of the shutter speed dial, thanks to a (luckily!) perfectly adapted rubber washer. It made it easier for me to manipulate it by the tip of the index finger.

Straightaway, I bought, together with the KX camera, an f:3.5/28 mm wide-angle and an f:4/200 mm telephoto. Later, I bought an f:4/100 Macro Bellows with its bellows, as well as fixed and variable-length extension tubes. I still use the 100 and 200 mm lenses, the 100 mm macro being especially useful for digitizing slides. 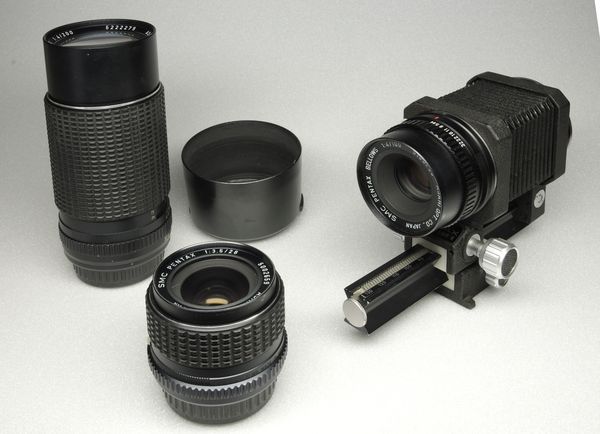 The K bellows does not allow the diaphragm preselection; it is therefore necessa­ry to make exposure adjustment at work aperture. With a digital camera, the problem is the same, but the solution is extremely simple: just make several shots until you find the correct exposure.

All this equipment was very robust and still works perfectly today.

Together with its brother the MX, the ME camera follows the K series, forming the M series. The keyword is now compactness, both for the bodies and for the lenses. At the price, in my opinion, of lower robustness and optical quality. I chose it to benefit from an automatic exposure camera (with aperture priority).

In a sense, this camera is more modern than its predecessors, with a vertical travel metal blade shutter, and a light emitting diode display in the viewfinder. The focusing is achieved by a split-image rangefinder. It also has an exposure corrector coupled with the film speed selector. On the other hand, there is no mirror lock, no depth-of-field tester, and no view of the aperture value in the viewfinder. 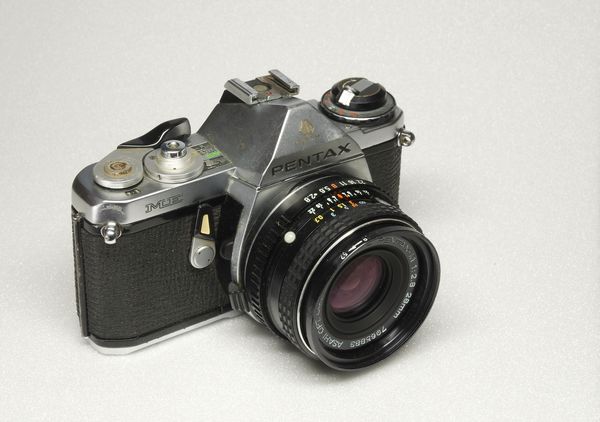 Pentax ME with f:2,8/28 wide-angle. It can be seen that the body has lost some elements: the hubcap of the cocking lever, and, more annoying, the exposure mode selector (around the trigger).

I had it equipped with a winder, a kind of motor that allows arming. It had died rather quickly. There, I saw SMD (surface mount) electronic devices for the first time.

We come here to a more serious camera, although not professional, this role being devolved to the Pentax LX with interchangeable prism — like the Nikon F! Automatic aperture priority, like the previous one, but also speed priority, thanks to a modification of the K mount become KA, with an additional A position on the aperture ring and electrical connection contacts between body and lenses.

The shutter speed selection is done by two push-buttons; I didn’t like this. I preferred the good old rotary dial. But electronics was beginning to take precedence over mechanics…

Otherwise, we find on this camera the depth-of-field tester and an electronic timer. In addition, there is a liquid crystal display in the viewfinder for speed and aperture. This display is lit only in natural light by a window in the prism, clearly visible in the camera picture below. An additional lighting is provided by a small momentary push-button: the light meter batteries which also feed this lighting must not be spent too quickly.

Equipped with a strong motor drive, thanks to eight AA cells or batteries, it can reach a significant rate of shooting (I don’t have the figure in mind). But it happened to me not to feel the end of a film, and to continue to shoot in the void. It’s still a mystery to me, because the film was not broken, and had no torn perforations… 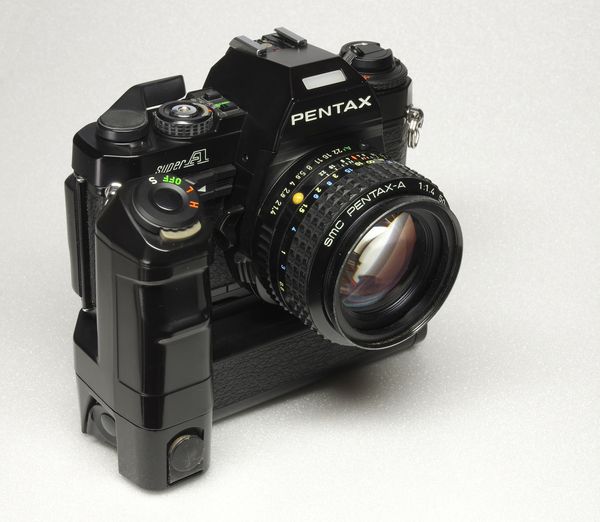 Pentax Super-A with Pentax-A f:1,4/50 lens and motor drive. On top of the motor handle, an additional trigger, surrounded by the shooting rate selector: S (Single), L (Low) and H (High).There is a third trigger at the bottom left, convenient for vertical shots.

This camera is still in very good condition. The only part to change would be the small piece of foam whose purpose is to damp the mirror rise.

I had several electronic flash units that didn’t live long. This one, as robust as it is imposing, is still operational today, although I rarely use it now, since I now have a camera that allows the measurement of the flash light through the lens, something that does not allow this Sunpak model.

The reflector is orientable horizontally and vertically. 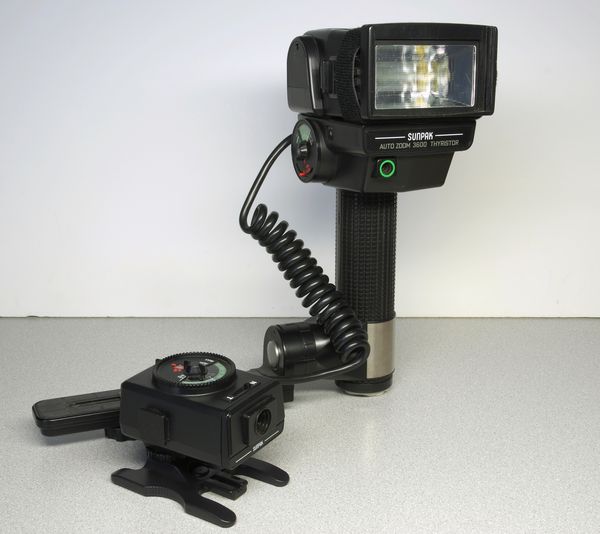 Here, the measurement is done by a cell, either included in the flash body, or fixed in the hot-shoe of the camera, thus making it possible to keep the flash away from the optical axis: it is fixed under the camera by a bar, from which it can easily be detached to move it further away. But then, at arm’s length, its weight is felt… A regret: the big handle is empty; it could have been filled with batteries! But no, all is in the head (six AA batteries)! 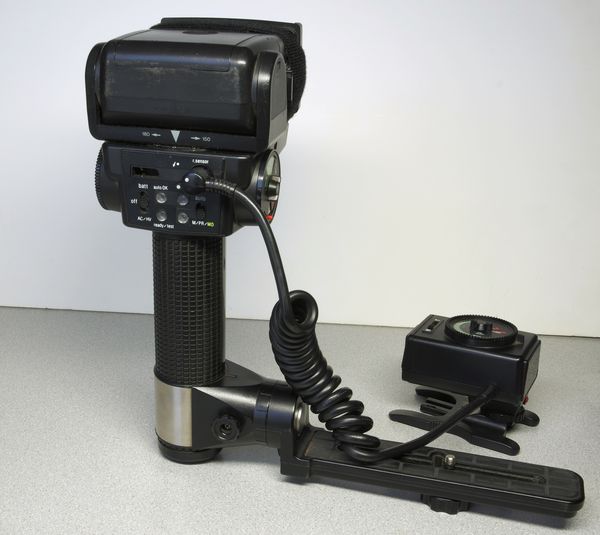