Turning the red front lights off

For turning off the red lights, there are two possible solutions:

I chose the second solution, with a little bonus: the switch will be a bistable reed (flexible blade switch, controlled by a magnet). This means that it will remain closed even in the absence of the magnet, without complicated electronics. This is a technique I have already adopted for several coaches. Show video. The only difficulty is that these reed switches are not many in the market. The only ones I found, type PMC-1424THX, are on sale at Conrad, rather expensive, and, unfortunately, much more expensive on the French website than on the German one. But at Conrad’s, verboten for a Frenchman to order in Germany… If you have contacts in this country, you know what you have to do. Even with shipping costs, you’ll be largely a winner.

Note: I found another manufacturer, Standex Meder, who offers this type of reed switch, ref. KSK-1E66, and a dealer, Mouser Electronics. This product doesn’t seem very interesting, because it is approximately the same size as the Conrad, just a little narrower, while being almost three times more expensive.

There are two questions left:

As the LEDs to be controlled are at the front, you may be tempted to place the reed at this position. Especially not! The presence of the loudspeaker magnet — for a sounded version — will prevent the reed from working! It is also necessary that the location is easily visible from outside, to know where to pass the control magnet over.

The best place I found, which nevertheless requires a slight milling under the roof (surrounded in pink), is located above the passenger access doors. I took the opportunity to paint the underside of the roof in black to minimize the light leakage (there are unfortunately many others, on the side walls and at the lamps). Click the image for a closer view of the reed.

I fixed the reed (surrounded in green), lying at about 45 °, with a little Patafix, but it is not really essential, because it is well stuck under the roof!

I give you here the result of my investigations, without total guarantee, because I did not want to completely disassemble the LED circuit, which is in the form of a flexible circuit (here is the back one). It is easy to unplug from the board by sliding the connector’s black lock. This makes it possible to test with an ohmmeter with little risk.

So, here is the supposed diagram of the front lights (the rear circuit seems identical). Note: the wires are numbered as in the picture below. 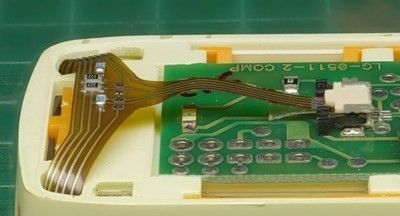 Click the image for a closer view of the connector lock. 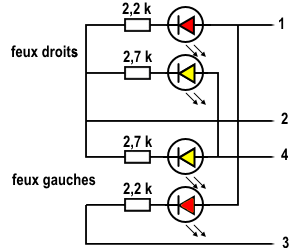 It is noted that all the LEDs have a common point on the cathode side, through their limiting resistors, except that of the left red light. I think it is for the back signalling in era III, during which only one of the two big lamps was lit. It can be seen that, in order to cut the red lights, one can act on wire No. 1, common to both red LEDs.

A small scalpel surgery follows: scratching the insulation varnish on track #1 over about 5 mm, cutting and removing of a 1 mm section, tinning the stripped parts. Finally, soldering of the reed connecting wires. 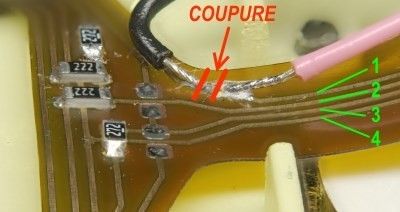 Tip: work on the unplugged flexible circuit, and place under it a scrap PCB, or aluminium, or a piece of thick cardboard, which will avoid touching the railcar body with the soldering iron. For the iron, fine tip (for SMD) mandatory! And pay also attention to the brave driver, forced to stay in place!