Changes to be made

Here, I have planned little: the end handles, the missing hauling hooks and the main marking plates.

The original handles are simply cut with a scalpel, retaining the relief representing their fixation. Drilling with diameter 0.4 at an angle of 45° approximately. This time, I use piano string more rigid than nickel silver, but still easy to bend on template.

They should have been folded to fit the wagon end wall, but I did not think of it at the time. And no question of trying to fold them afterwards: it was playable with nickel silver, but not with piano string!

I use SMD hooks. They should be provided with a support, preferably strong, because these parts are fairly exposed.

Here is the diagram of this support, intended to be fixed against the inside of the chassis, made of 1.5 × 0.3 mm nickel silver profile. The diagram is precise, but the folding is done at sight!

The hook is soldered to its support, and the only difficulty is to keep the two parts, still very small, well aligned during the operation. The gluing on the chassis is done with superglue. 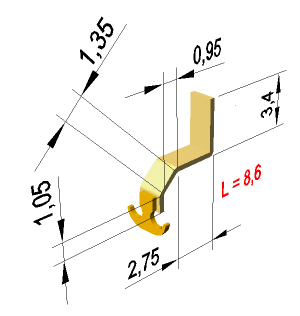 Initially, I only intended to change the licence plate. But when erasing the original marking with alcohol, the load table was affected. So, I had to remake this one as well. As the characters are black on the body grey metallic background, I used a decal sheet with transparent backing. 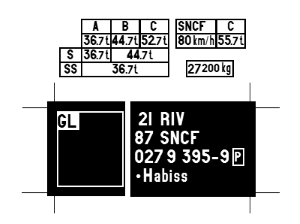 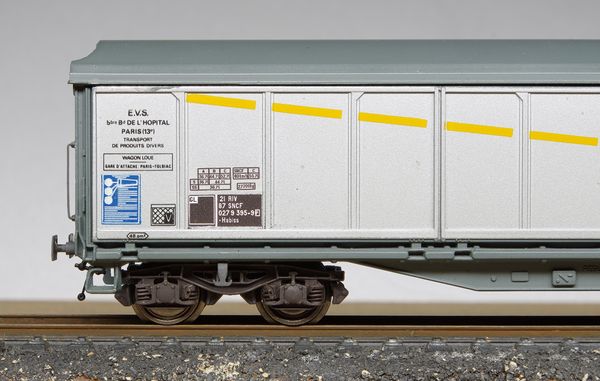 Here, as for the STEF wagon, the new plates are reddish. The transparent support of the load table is almost invisible on the front photo, but is actually visible under certain lighting conditions because it is mate on the metallic background paint. I do not currently have varnish that can restore this surface condition. Perhaps the Microscale Microcoat, which exists in three finishes (gloss, satin and flat), of which a satin, could be suitable?

Yes, what about the Rloos, among all? Well, I have not yet seriously considered its fate. Apart from the common changes (bogies, buffers), it has not suffered anything special, for at least two reasons: first, it has certain reliefs (rings, ladders) moulded with the body, which will be very difficult to cleanly flush. Then I would like to give a coherent load to it, I think for example of pallets of empty bottles, and I have not yet found how to make it in a way that is both economical and realistic. So, to be continued ?