The marking plates are mispositioned on the Jouef wagon. We can assume that this was done to facilitate the inscription in curves of very small radius. So, I’ll replace them. I need:

The colour was first determined by a test on normal paper, then photography of the test next to the wagon, in order to find out what colour corrections should be made. The result on photo paper is not perfect, but I will content myself with it.

On second thought, I should have cut out one of the labels and stick it near the correct position: the illumination would have been more equal between the parts to be compared, and the comparison would probably have been more accurate.

It will be noted that the colour of the LS Models bogies is also quite different. A good weathering should reduce all these differences. 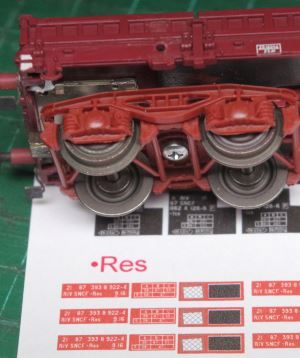 Here is a sample of these markings as a PNG file. The originals are in vector format and use the SNCF fonts that could be found a few years ago on the Apocopa website, but unfortunately no more today. Exterior black lines are cutting marks to enlarge the coloured area, thus avoiding leaving any white strip after cutting. The characters are slightly oversized to improve their appearance. 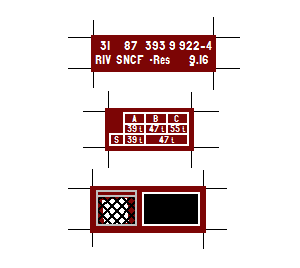 The supports of the plates are in chrysocale of section 1 × 0.15 (because I had it on hand). They will affect a Z-shape, so that they are glued on the inside of the chassis, and make a slight protrusion on the outside of the wagon.

Soldering is done flat, before shaping: holding the parts is easy, and so is the soldering. Cut to length is done as and when. The cutting of the plates is then done, and finally the folding of the supports.

As for the steps, I burnished these pieces, but I do not recommend it. I have already said that this operation leaves a powdery layer which must be removed. But it is difficult to reach nooks, and future collages are likely to fail. 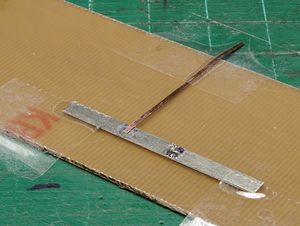 Positioning, gluing and assembly on the wagon

Here is an approximate diagram of the location of markings on the wagon, based mainly on photographs, while noting that there are quite a number of variants. The label holder will be stuck onto the old licence plate, reduced to the required dimensions.

The next operation is the pasting of labels onto their plates. No difficulty, except to ensure they are properly horizontal. This done, I pass a fine brown felt pen on the paper edge.

Gluing on the wagon is done with superglue, after removing the bogies. The white mass visible near the buffer beam is a piece of round polystyrene which was used to refill the hole of the buffer, which was misplaced, to improve its position. I did not want to risk removing the surplus. 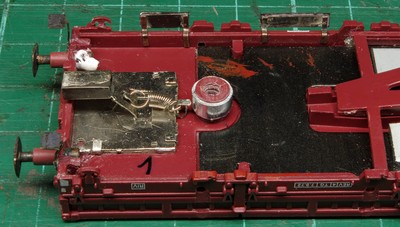 View of a new plate next to the old one not yet modified, for comparison. “My” police is more conformable than that of Jouef. Ouch! I made a mistake on the exchange system number: 21 instead of 31! Let me do it again!

Moreover, the bogie travel should not be a problem. 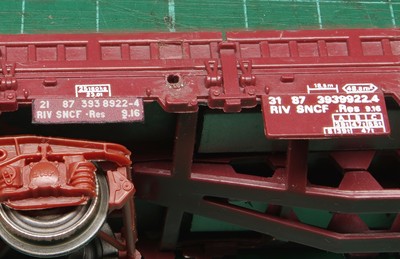 I change for decals

Finally, while we’re at it, I embarked on the decal! Two pockets ordered, one with white background, the other with transparent one. Obviously, for the Res wagon, white marking can only be obtained with a white background. After a few more or less satisfactory blank tests (an article about it is being written), I replace the self-adhesive paper, the most difficult is to take the paper off without leaving glue traces. The “decals”, as the initiates say, can be easily (re) positioned. Note that I have changed the colour of the print. See what it says at the bottom of the page.

The original brake wheels are very coarse and mispositioned. There are very fine photo-etched ones, but they have the disadvantage of being flat and not conical. Their ideal diameter is 5 mm. Here, they are ø 6, one plastic, and the other brass.

The problem is that there is no support, the old wheels were simply glued on the chassis reinforcement, and too low. I therefore glue a ø 1.2 polystyrene round into the reinforcement perforation, which has been previously drilled in its axis, on each side, by a ø 0.4 hole. It receives the ø 0.3 nickel silver wheel shafts. 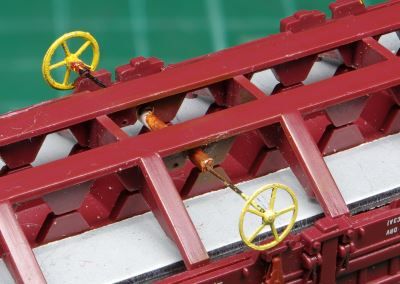 Several stakes were broken, so I decided to replace them with surplus parts coming from Vitrains and Roco wagons. The longest thing is to properly make the old ones flush without damaging the body. Then we must drill to the proper diameter (1.3 mm for me). The fact that there are two different types of stakes does not bother me: one can see this on real wagons.

Other details to add — maybe…

The most visible details that are still missing would be the brake handles and the purge pull, shown in the diagram above. We’ll see that… one day… 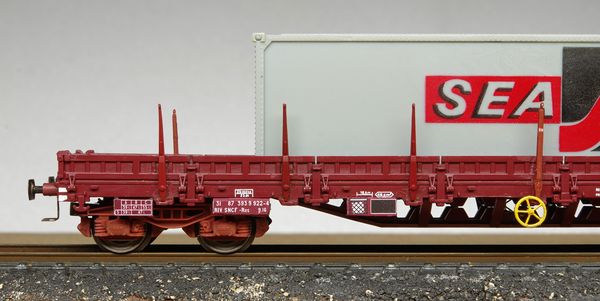 Modified like this, I find that this wagon still looks good next to the recent rolling stock, especially since this type of wagon has not been much reproduced recently. There is a Trix model ref. 24521, price about €40, engraving not so much better, and a Roco ref. 67558, about €45, both in era V, evidently of Germanic ancestry (buffers among others) and… expensive!