I chose LS Models welded type Y25 bogies. But for the Res and Rloos, moulded Y25 would be better: it seems to me that the vast majority of these wagons, if not the whole, were equipped with these bogies, at least originally.

Naturally, this change will be accompanied by a modification of the pivots, which do not necessarily give the correct height of the wagon, which are often split and damaged by not very careful disassembly and reassembly and whose large original screws (mark 4 in the picture below) are also to be replaced.

If the pivots are split, they must of course be repaired (superglue or polystyrene model glue). To prevent future deterioration, I reinforce them with a ring made of a thin tube piece of inner diameter 5, here in aluminium, chamfered inside for easier installation (mark 3).

Their height must then be reduced to about 5 mm. This value is not absolute, it depends on the concerned wagon, and it is better to measure the height before intervention and deduce the value to be removed. Personally, I am not very good at filing perpendicularly to the axis. To achieve this more easily, I stack around the pivot washers chosen to reach the desired thickness (it is not to within a tenth millimetre), then I file until reaching the top of the stack.

In the photo, the new handles and the new buffers have already been mounted, and the steps have been flushed. 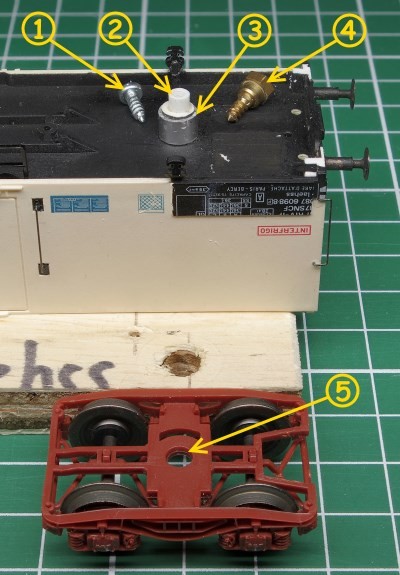 Note the plywood support, whose core, invisible in the picture, is 30 mm wide, i.e. the inside width of the wagons, thus letting to immobilize and handle them without risk of deterioration.

The LS Models bogies have a ø 3.4 pivot hole (mark 5). That’s good for us: there is a 3.3 diameter Evergreen tube that fits perfectly, with just the necessary backlash. I therefore drill the pivots of the wagon, whose thread is often very tired, at ø 3.3 (a drill of this diameter is fairly easy to find, because it is the proper value to tap to M4). Be careful, for flat wagons, not to go through the floor!

An Evergreen tube section is cut to the desired length (5 to 8 mm depending on the wagon), held in a mandrel to prevent deformation, then “pre-tapped” with the Parker screw which will be used for assembly, avoiding excessive torsional stresses during final assembly. 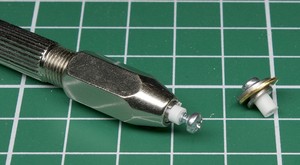 The protrusion necessary for the bogie backlash, whose cross-piece is 2.1 mm thick, is determined by a stack of washers — again! — with a total thickness of 2.4 mm (too much is better than not enough) under the screw head. The pivot thus equipped is finally glued with superglue. Once the glue is dry, it will be enough to remove the screw then the washers and put the bogie in place.

Regarding covered wagons (EVS and STEF), I thought it useful to have a three-point suspension to improve their seat. On the two-point suspension side, bosses by which the chassis rests on the bogie are installed. The pivot that will receive these bosses should be slightly shortened (barely 0.5 mm).

The height being relatively large, about 5 to 6 mm, I design something rather strong. The device consists of four pieces of 1 mm thick polystyrene: 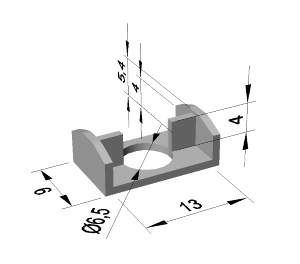 If you have thicker polystyrene, say 3 mm, you can use it for the base, thus avoiding the need for reinforcements. The width of 9 mm is calculated to allow just enough space for the planned Makette elongation drawbar (see next page).

Once the parts are glued (liquid Kibri), a 6.5 mm central hole is drilled so that the assembly can be mounted on the pivot — reinforced, I recall, with a ø 6 mm aluminium ring. The whole is stuck in place with thin double-sided adhesive: a stronger bonding seems useless.