Despite their different design, the two models have identical bogies. These bogies of Y25 type are quite complex since they are a screwed assembly of four main parts: the proper chassis, a part supporting the pivot, and finally two sides. This complexity will allow us to act paradoxically in a simple way, by raising or lowering the pivot piece as needed.

I will not try to correct the total height, but only that of the buffers, which is ultimately the most visible; this correction will be plus or minus 0.5 mm. Let’s start with the easiest thing: raise the curved-wall wagon. 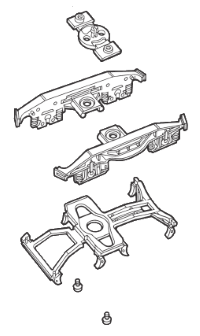 Raising of the curved-wall wagon

Simply insert a spacer made of 0.5 mm thick polystyrene sheet between the chassis and the pivot piece. Here is a dimensioned drawing of this piece and a picture illustrating the thing.

In the picture, the new part is already positioned in its chassis location, and the assembly screws are already in place. The pivot piece is placed above.

While we are at it, let’s see how to restore the three-point suspension. In fact, the wagon chassis rests on the bogies by the cylindrical protuberances of the pivot piece into which the assembly screws are screwed (circles in the picture). It is sufficient, on one bogie only, to reduce the height of these protuberances: half a millimetre should suffice. There is nothing else to do with the curved-wall wagon. On the flat-wall wagon, in addition, the screws must be shortened. 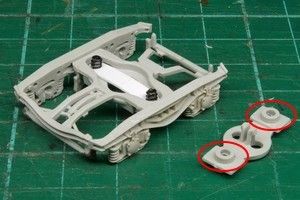 For this model, this will be a little more difficult to achieve, but the principle is the same: instead of thickening the pivot parts, they will have to be thinned by 0.5 mm.

For this, it is better to use a milling machine, but it is also possible to file the parts. To avoid damaging them, I made a small aluminium machining assembly. Holes are provided for milling two pieces simultaneously; you may of course put as many parts as you want.

There are three holes ø 4, spaced 8 mm apart. The middle one receives the pivot (red circle); those on the sides (green circles) receive the cylindrical protuberances already seen. The parts to be milled are held by their own screws mounted under the plate, with washers interposed to avoid overtaking. 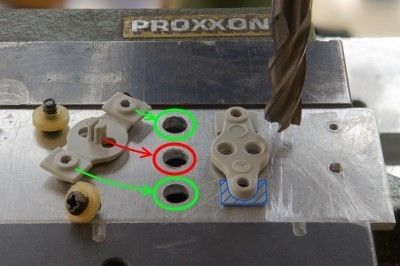 Attention to the perfect parallelism of the assembly to the table of the milling machine! A dial probe indicator will be useful to verify it.

In order for the workpiece to penetrate deeper into the chassis, the projecting parts of the rectangular shapes must also be removed (blue hatched area in the picture above). A well-sharpened scalpel does the trick. 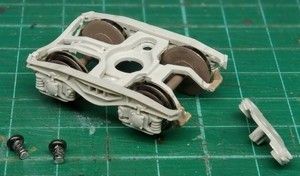 Reassembled bogie: it can be seen that the pivot piece is more depressed in its housing. I recall that the screws must be a little shortened, especially on the side where the 2-point suspension is removed. The rod connecting the front brake blocks was cut because it was leaning on the NEM box. 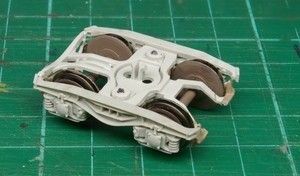 The buffers of the “flat-walls” were about a millimetre higher than those of its colleague “curved-walls”. Now, they are rather a bit lower, although the height at the roof level is not totally compensated. The trouble is that the “flat-walls” couplings are now also too low. We have to find a way to raise them up.