I neglected the wagon during almost one year, occupied that I was for other projects, such as the container gantry. And I did well, because some painting problems of the latter taught me some things not to do.

First, I notice that a sort of grey powder has developed in many places, I think where I used soldering cream. Indeed, apart from the solder cleaning with a fibreglass pen, I had not washed the wagon. So I remove this powder with fibreglass, then wash in hot water.

Usually, I degrease the metal objects with caustic soda, but I have it no more and I cannot find it any more in my usual general store. I fall back on Decap Four! I let it work for about 10 minutes, then wash the wagon again with hot water.

Then comes the pickling / passivating phase, with the product P505 from AMF 87. Dip for 6 minutes, then re-wash. And there, surprise! Doors are coming off! Small soldering points (made with soldering cream) did not resist. This reinforces my belief that the soldering cream is only good for tinning parts, not soldering! No problem, I’ll paint them apart, and replace them at the end, by gluing with CA.

Now, I am going to try an experiment that was recommended in his time by Gerard Huet: burnishing. Advantage: it makes it possible to pinpoint the badly cleaned places, where the burnisher does not work. On the other hand, a possible scratch of the painting will be seen less on a dark background than on the shiny metal. Disadvantage: there is a risk of non-adherent powder production, which must be wiped and washed as good as possible. The application is done by brush, not dipping: I found that the latter method produces much more of this black powder. I guess it’s a matter of whether there is oxygen influencing the chemical reaction. Of course, a serious washing with brushing is necessary after this treatment.

First I airbrush a very thin, non-covering layer — on the advice of Christophe Dufresnoy, AMF 87, of hooking primer.

Then comes the first coat of paint, UIC 606 red. To my taste, this colour tends too much to carmine. For the next layers, I will make a mixture of this hue and golden yellow, at the rate of five parts of the first and one part of the second. Incidentally, I notice that the recommended dilution (two-thirds of paint for one third of diluent) is not enough. The best is half-and-half. With the recommended dilution, the resulting surface is quite granular.

The final result, after two other coats, is a little too clear, but it evokes a little faded painting quite well. 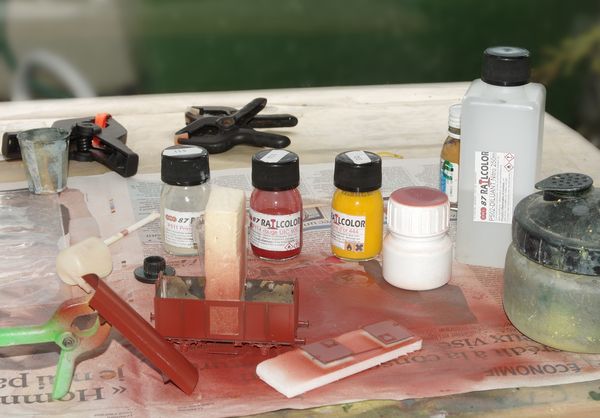 Railcolor paint is pretty bright, which is not to displease me. It will still be time, after the laying of the markings and weathering, to apply a satin or matte varnish to break this gloss.

Here is the aspect of the wagon after reattaching the doors. The surface is far from perfect, even if it is not seen too much in this photo. 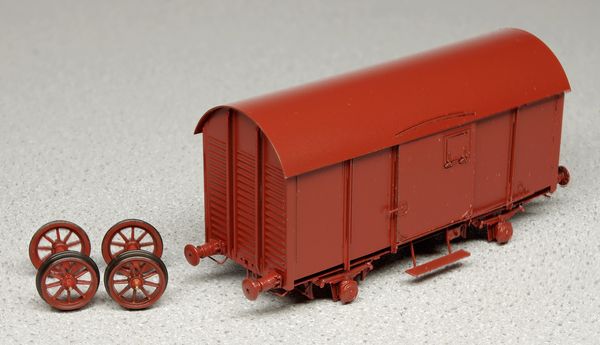 It’s time to choose the wagon’s era of “life”: this will determine its registration and markings. Depending on my preferences, I have the choice between the end of the era III (say the sixties) with the SNCF numbering, and the beginning of the era IV with the UIC numbering. In the latter case, it is unlikely that this wagon is still in commercial service, since this series, like all the G1 (or K1) wagons from the old networks, was completely erased on 1st January 1969 (Ferrovissime Special Issue No. 7, page 67).

Here are the markings to choose according to this choice; red for era III, green for era IV. Note that the revision cartridge is dated 1949, and there is no later date! I finally choose Era IV, with maybe a big “Z” signing the death sentence of this poor wagon! 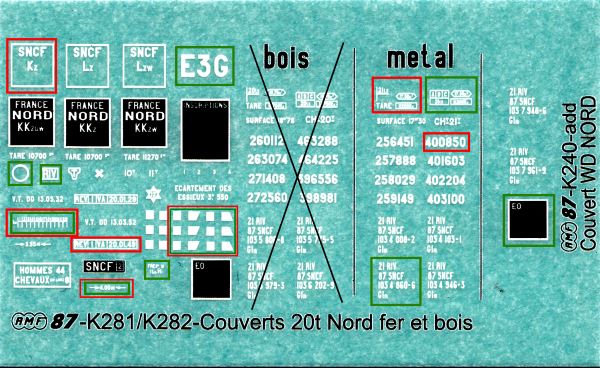 Regarding locations, simply refer to the AMF 87 notice, except for the end braking marks and the revision table, which have been forgotten in the drawing.

Laying is made easier by the fact that the decals are cut out. There is no need to cut them as close as possible. That’s lucky, because some are very small!

Here is the material used, photographed after the laying. On the left, the products meant to facilitate the installation (Microset) then to “integrate” the decal to the support (Microsol). The action of the latter is not obvious, perhaps because of the decals’ thickness. Then, tweezers to hold the decal, toothpick to hold it in place or move it (gently…), cotton swab to mop the excess liquid. On the right, cup with a little wa­ter to soak the decals (a few seconds of soaking are enough). 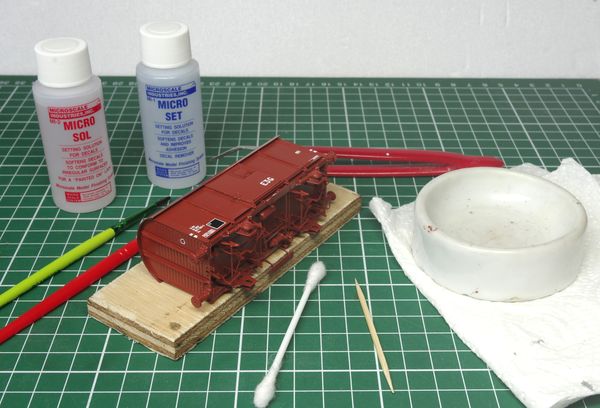 The wagon is fixed on a small board with a little Blu Tack to make its handling eas­ier and to protect the steps already well ill-treated.

I cut the decal including a piece of support longer than just necessary — this is not always possible if decals are too close to each other — making it easier to grip and remove by sliding. I use a wooden toothpick to avoid damaging the decal. These decals are pretty solid, I haven’t torn any. In return, they are relatively thick. 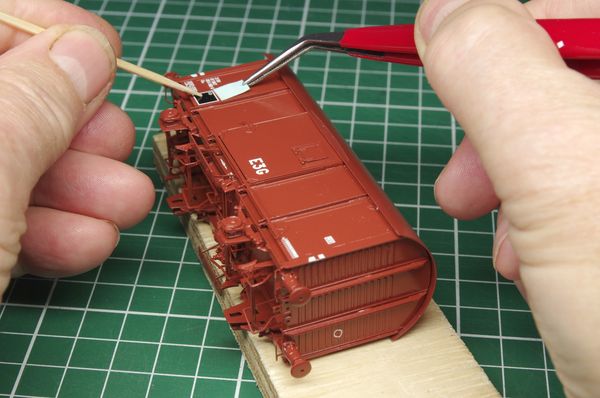 I find the result very satisfying. I feared difficulties in marking the chassis, behind the footsteps, but it went well.

I have to glue the label holders that I forgot, as well as the couplings, these simply glued, without the possible tension spring, and the brake half-couplings, got back from another wagon detailing cluster.

I’m not at all a specialist of weathering, and when I see some achievements, I stay speechless! So I’m going to settle for something very simple.

Why Humbrol paint for this purpose? Because I have already used it and the result has satisfied me. However, I must admit that it is a little more complicated than with the Railcolor or Décapod brands; in particular, care must be taken when cleaning the airbrush: acetone causes the paint to flocculate or precipitate, which completely clogs the tank and the nozzle! Humbrol Thinners should be used instead.

Of course, for weathering, you have to be light-fingered on the trigger! I start with a rather thin veil on the body bottom and the axle boxes. Then, I come back a lit­tle heavier on the chassis and the underside (steps, air tank and brake distributor). Finally, keeping the airbrush more distant (20-25 cm), I pass a veil over the entire body to break the paint gloss, insisting a little more on the roof. I don’t forget the axles, treated separately, whose treads are protected by Roco grip tyres.

Finally, I hand-paint the buffer trays and rods, also in Humbrol slate grey, but not diluted. 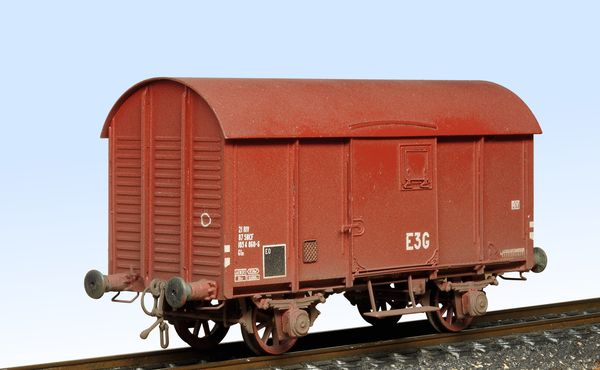 I did enjoy assembling this wagon; it allowed me to remove my doubts about my capa­bilities of construction in brass / nickel silver. But, mainly, this decided me to take action on the complete construction of a model, giving me a lot of design tips.

Above all, I don’t forget all those who, on the Loco-Revue forum or by email, gave me very useful advice. May they be thanked here.

This small wagon is worth a box, like any commercial model. This box is designed to particularly protect the steps, which are this model’s only fragile part. The interior is made of extruded polystyrene (PSX) 6 mm thick. 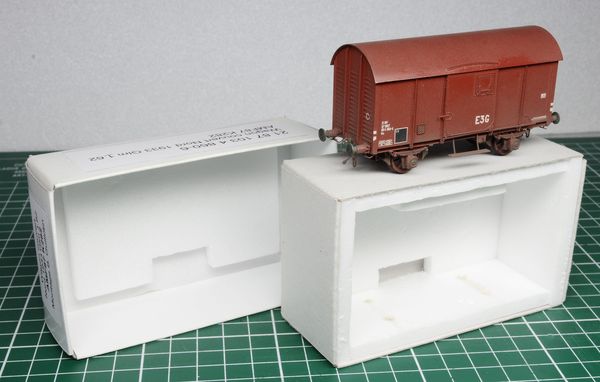