Unlike the rest of the kit, these parts are brass, but it doesn’t matter for their assembly.

As before, and contrary to what the notice suggests, I prefer mounting the decorations (reinforcing profiles) before soldering the end walls on the chassis. There are a few chances of de-soldering. It did happen once, and for one solder only.

I prepared a piece of plywood with two grooves about 0.6 mm wide, spaced 9 mm inside. These grooves receive the reinforcement profiles soldered two by two, then the end walls. The different parts are thus well held for soldering.

The grooves are milled not with a ø 0.6 mill bit, which I don’t have, but with a broken carbide drill bit of this diameter: there is just enough length left for that. Of course, I couldn’t mill metal as well; but for wood, it works! Moral: do not throw your broken drill bits away! 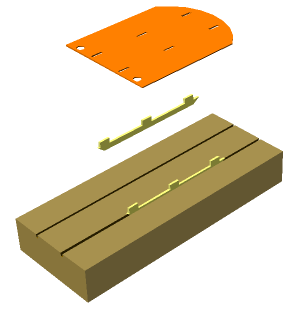 Note: I did not solder the bottom tenons, which will be inserted in the buffer beam. This will be done after mounting the end walls onto the chassis.

I reduced the head diameter of two screws M2 × 5 to about 2.7 mm so that they could insert into the buffers’ holes by the back. The end wall, after tinning, is fixed on the buffer beam by washers and nuts; it is thus possible to finely adjust its position by checking the coincidence of the buffer beam small holes. The steel washer is unlikely to be soldered; and in fact, this did not happen. 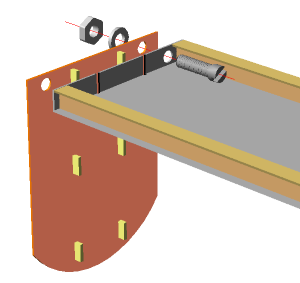 Preparing the side walls

The reinforcement profiles are soldered before mounting walls, as for the end walls.

Soldering the walls on the chassis

Warning: the end walls have a small recess suggesting that the walls come to a stop below. But it doesn’t fit. This recess must be filed.

On the other hand, in order for the walls to position themselves correctly with respect to the side beams, the height of the lower mortises of the reinforcement profiles must be reduced by 0.5 mm from below (the height of the tab will go from 2.7 to 2.2 mm).

Note: the roof recess is very exaggerated here. It’s only a few tenths of a millimetre in reality. 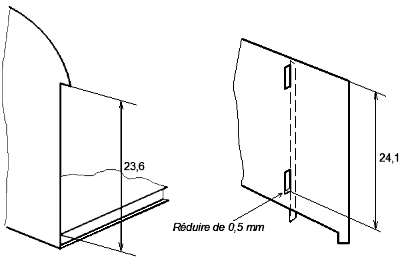 For soldering, the walls are held by adhesive tape, with a cardboard spacer of 0.5 mm on each side (on the ends) to obtain the desired protrusion of the walls relative to the end walls. The disadvantage of the adhesive is that it leaves a deposit of glue under the effect of heat that must be removed with acetone.

For the positioning of the cross pieces, it is necessary to mark the middle of the arc of circle. For the interior of the roof, this is difficult!

I suggest a small improvement which would consist of interrupting the guide half-etching (2) and practising the corresponding notch into the cross pieces (3). Finally, chamfering these parts (1) facilitates their introduction into the body.

To hold the cross piece under the roof before soldering, a spring clip is suitable. 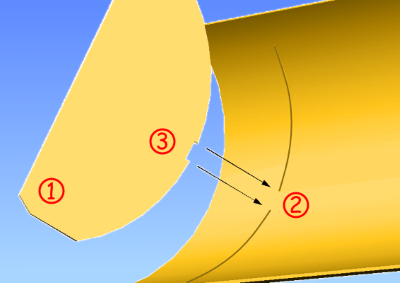 After soldering the first cross piece, I checked the position of the second one by the eye: there was a rather big offset, despite the correct position. In fact, the roof is twisted. Corrected by inverse twist.

Result: there is a slight asymmetry of the assembly, but invisible in situation, except to look from the front and very closely.

The foundry has small irregularities. Burrs on the plate, tenon not perfectly cylindrical (some enter freely into the buffer beam, others not), moulding seal marks. All this is to correct. The most annoying is the lack of flatness of the base, difficult to correct given the presence of the tenon. I even tried on one of the buffers having a particularly not flat base sawing the tenon, rectifying the base, then drilling the shaft (ø 2 mm) to insert a brass rod. It worked except that the new tenon is crooked! But what matters is that it correctly centres the buffer in its housing.

The buffers are therefore not perfectly perpendicular to the buffer beam. But however better than on some industrial products…

It’s time to check whether the axles are easily mounted. A small problem: the wheels lose their tyres. According to the manufacturer, I quote:

If there are worries with the wheels, you have to send them back to me for final reassembly with the press, I had to change the process because the plastic shrinks very slightly over time and some tyres escape, my new process definitely fixes this problem.

I did not find it worthwhile to pay La Poste for so little. I stuck the tyres onto the wheels, from the inside, with a little liquid superglue.

No problem mounting the wheel sets, but I find that there is much — too much — side clearance: almost 1 mm. Will mounting still be possible by adding washers between bearing and guard plate (because you have to spread the guard plates, as on a plastic model)? The answer is yes. The washers I had on hand have a ø 1.6 mm hole, an outside diameter of 3.4 mm and a thickness of 0.3 mm. I slide one on each bearing, whose diameter is 1.3 mm.

Before decoration, it remains to make a thorough cleaning of soldering burrs, even if there are not many. It’s not really exciting but I know it’s essential for the final look of the object. I don’t intend to invest in a sandblaster yet. Everything will be done with file, scraper or fibreglass pen, or even a stainless steel brush on mini-drill as suggested by a member of the Loco-Revue forum.

Here is the result before the painting operations. The coupling is not the kit’s. 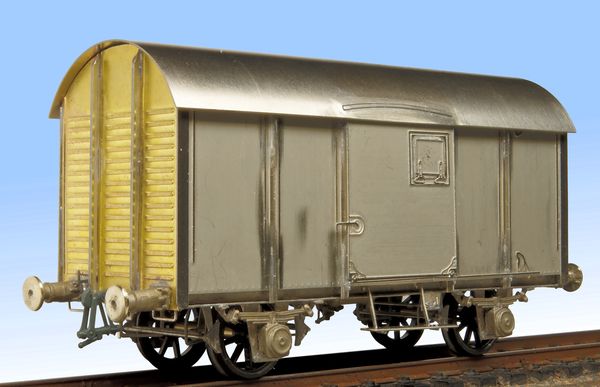