I begin assembling a metal kit, a nickel silver one in this case. This kit is supposed to be within the reach of a beginner. OK, I’m one… The kit reference is K282. Its price (in 2017) is €130 sold alone, and €140 with the soldering initiation set, solution that I chose. I ordered at the same time the primer and the paint for the model’s decoration.

Note: given my status as a beginner, I preferred not to take pictures during making, having too much to do with it. My punishment was to draw some parts in 3D to illustrate the subject…

The set, delivered in a cardboard shipping envelope, consists of a 0.3 mm thick photo-etched nickel silver plate, a smaller brass plate for the end walls, another nickel-silver plate, shaped, for the roof, foundries of the same metal (buffers, brake accessories, axle boxes and suspensions), and finally a bag containing the cylindrical spindle axles, equipped with attractive spoke wheels, and their cut brass bearings. There is also a notice of a few pages in colour and two decal sheets (one per side).

As already said, the kit can for a modest supplement be delivered with the initiation set to soldering. It contains different types of tin alloys (for different melting temperatures), soldering water — which the electronic technicians would rather call soldering cream, flux, de-soldering wick and a set of metal clips for holding parts.

Obviously, before starting, it is wise to read and reread the advice of specialists, especially those of Gérard Huet, whose productions were partially resumed by AMF 87 when he retired. Unfortunately, Gérard Huet’s website whose address appears on the AMF 87 notice no longer presents any document. I therefore allowed myself to take back the old documents on soldering and make a PDF available here (in French). However, keep in mind that this document is several years old and that some suppliers mentioned no longer exist.

Another excellent source of information is the Loco-Revue Forum, in its part entitled The model-maker’s universe.

You’ll also have to learn how to clean the model, to paint it and to lay decals.

In short, if you are a real beginner, it will be of interest for you to practice on metal scraps before embarking on a real construction, as simple as it is supposed to be.

Foundry parts, buffers, axle boxes, brake cylinders, seem clear at first glance. The roof is in nickel silver, already shaped. But it is taped, and the adhesive left marks difficult to erase.

I read and reread the instruction booklet; it is obviously not written for a beginner: there are a lot of details passed over in silence, considered probably obvious… for an experienced maker! It would have been a good thing if the parts were numbered on the nickel silver plate, or on a drawing of this plate. Besides, I was not able to identify some small parts.

White decals on a light blue background are always almost unreadable, which is embarrassing for choosing the desired markings. The manufacturer should make a document reproducing these decals with increased contrast, to facilitate the selection, like this (in low resolution to avoid an illegal copy). 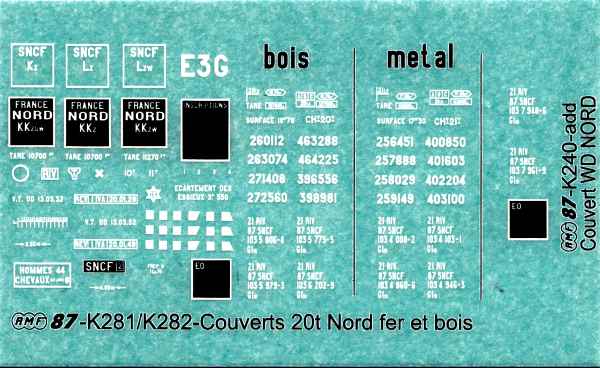 Note that there is no revision date after 1949, that is, neither for epoch III nor for epoch IV. Pity.

Also, note that beginner in kit making does not mean beginner, period! It’s necessary to have minimum knowledge in railway technique, for example how is constituted a braking system or a screw coupling…

I described this making on the Loco-Revue forum, which allowed me to get tips and tricks that I’ll make you enjoy here.

It is always good to gather documents, photos, diagrams, etc., of real vehicles. Here are the ones I can advise:

See also the article on this wagon.