Since I bought my first VTUs in 2009, I have been intrigued by the system of light ducts above the windows. Clearly, it is intended to mimic the real lighting of coaches, but the implementation raises questions: indeed, there is nothing to indicate how to arrange the light sources, however small they may be. Here they are:

So I want to take advantage of these light ducts to make lighting as close as possible to the original, with lights along the walls. This is how it looks. The diagram shows the equipment of half a coach. I have indicated the location of the windows to put things in the right place.

We can see that these so-called ducts do not conduct much: the light would have to penetrate horizontally, which is impossible unless there are sources less than 1 mm in diameter… A source placed in a will have to illuminate strongly to hope for a little light arriving in the lamps. In b, on the contrary, only the lamp just below will be illuminated, which implies a low intensity of light.

I first tested the light distribution using an “inspection lamp” made with a mini-PLCC LED (dimensions 2 × 1.5) and a 1 kΩ resistor, placing the source at points a and b apparently intended for this purpose.

In this way, by trimming the voltage applied to the inspection lamp, I can evaluate the intensity of the current required for each circuit. 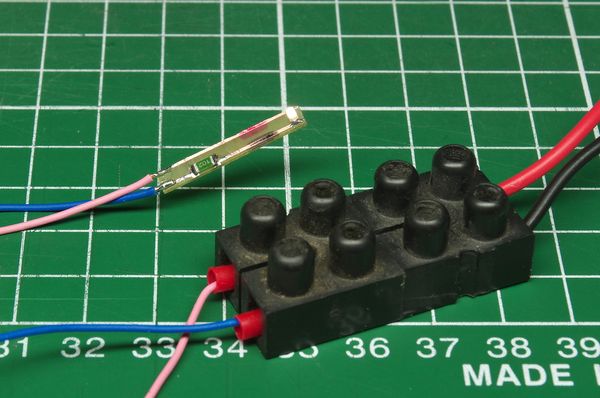 Bottom view with LED in point a. The distribution is not excellent, but it exists. 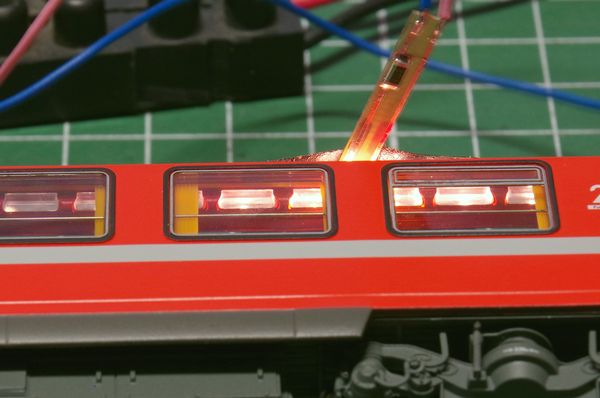 Bottom view with LED at point b. As you might have guessed, there is no distribution at all here. 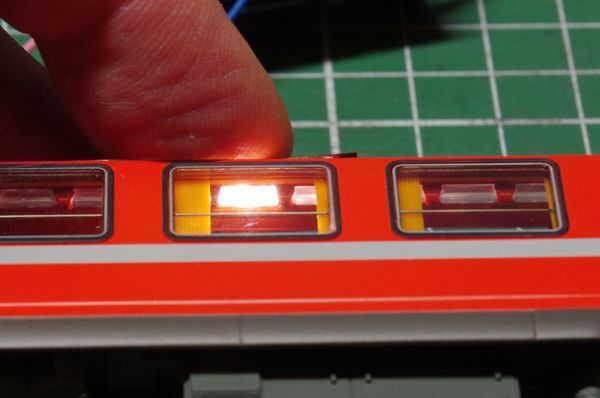 At the ends, there are lighting locations above the access platform (1), toilets (2) and gangway (3). They are equipped with a light duct that can’t conduct anything at all! In fact, almost all the light passes through the plastic! 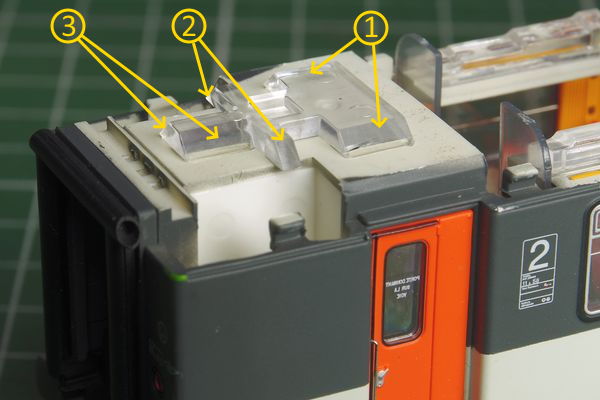 Fortunately, these ducts, unlike those of the rooms, are not glued. I will therefore be able to remove them and illuminate platforms and toilets in the classic way. 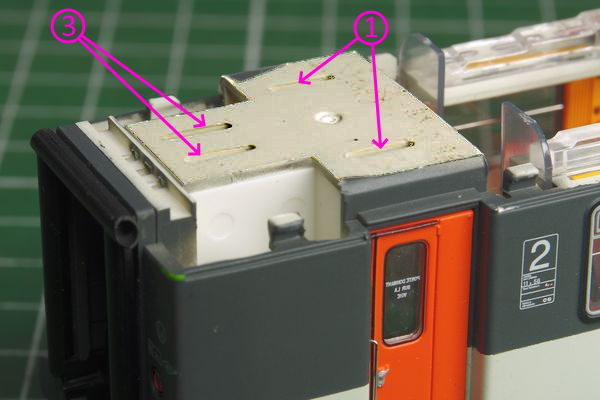 Note: I have increased the contrast on the top of the platform to make the locations of the “lamps” more visible. Those in the toilets are not there, as the light pipe is cantilevered.

This makes a total of 16 LEDs for lighting.

There are various notches and cut-outs to let the way through:

This results in a small difficulty: the width is quite reduced for the passage of the PCB tracks.

I printed and cut out the marking on the LED side to check the correct layout of the circuit.

The B5rtu bar coach is a special case, and it’s a bad surprise: the arches on the bar side are 21 mm wide instead of the usual 16. So the planned PCB does not fit, and cannot fit, because there would not be enough material left. Solution: Reinforce these arches from underneath so that they can be reduced in width. Diagram of the reinforcement:

Realization: the reinforcements are cut out of a 4 mm thick plate, the two upper edges of which are rounded. They are milled on the underside to a depth of 2 mm and a width of 14 mm. The plate is then sawn into widths of 4 mm.

Gluing the reinforcements under the arches. They are glued with CA glue. Maybe I should have used epoxy, but I didn’t have enough clamps. 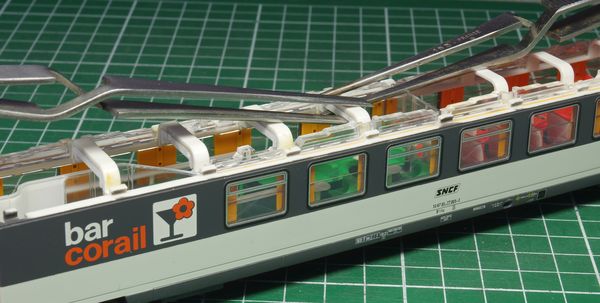 The arches are then milled directly onto the body. Appearance after machining to regain the 16 mm width: 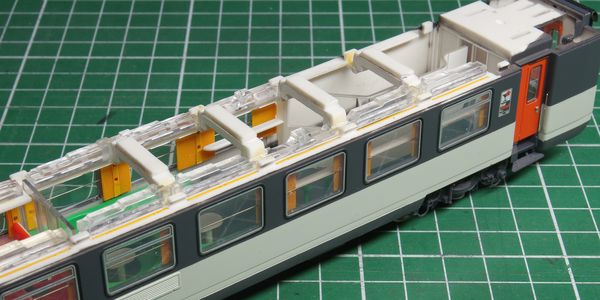 Check with the template.

Finally, ø 3 holes for platform lighting have to be drilled.

Test of the circuit

As soon as I tried it, I was disappointed (but I was expecting it): the light is really badly distributed between the lamps. The direct LED light seems colder than the others, probably because of the orange paint. I hesitated before showing this photo…

And, to make things worse, I notice that the doors are translucent!

The light duct system having shown its imperfection, I will return to LEDs positioned above each window. However, not all the lamps will be illuminated, which is a pity. That will be 10 LEDs per side, or 24 if you count the coach ends.