Lighting of the trailers

I plan a single circuit for all trailers regardless of their layout. The problem is that the crossbeams hide a good part of some compartments. In addition, the inner rim masks the corridor. In compartment coaches, it will be necessary to mill these parts.

Example, on which we’ll see what has been removed. First with the light strip in place. 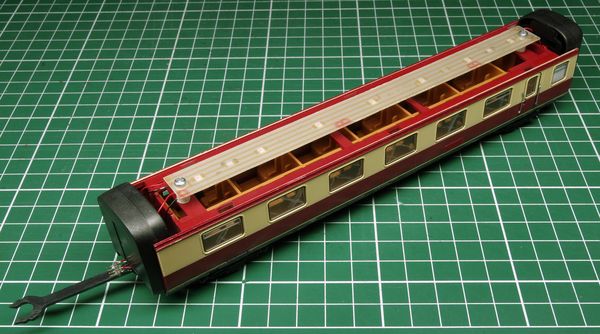 Detail showing the intervention on the crossbeams and above the corridor: 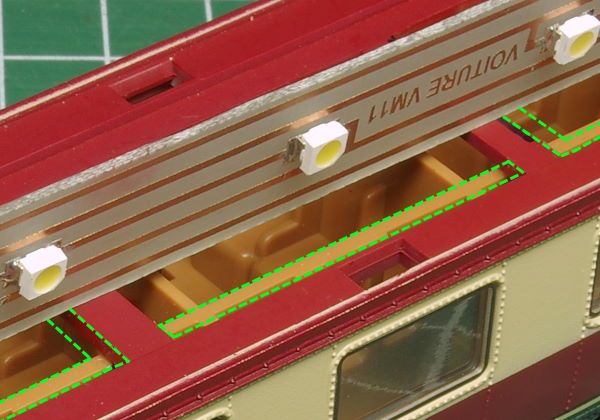 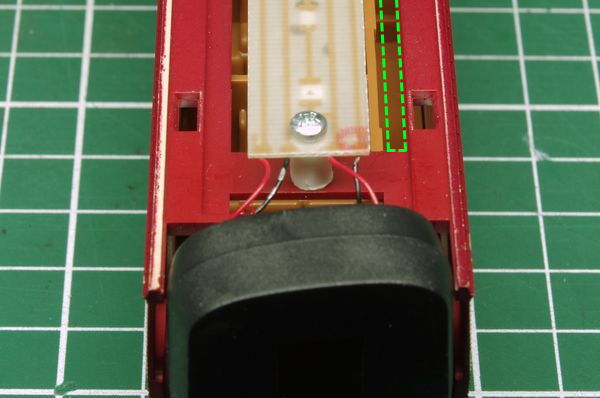 Also, note the presence of insulating spacers of six to seven millimetres high. The screws are Parker ø 2.2 × 9 mm. The distance between fixing points is specified on the accompanying document.

Discussion on the lighting circuit boards

Each strip has seven LEDs. The ideal would have been nine, but it posed a difficulty at the ends. The LEDs are divided into three groups, two of 2 LEDs, one of 3 LEDs. The resistors to be put in series are different, i.e. 2.2 kΩ for the groups of 2 and 3.3 kΩ for that of 3. Thus, under a DCC voltage of about 15 V, the brightness will be almost the same everywhere. But this is not valid in DC.

Point of detail: I only make single-sided circuits, for a reason of ease of manufacture at home. With double-sided, not more expensive it seems when we order to a manufacturer, the tracks feeding the dummy could be on the other side, allowing to get narrower strips.