For me, lighting implies improvement of the interior fittings which can be better seen as they are enlightened, especially the walls that are almost always raw. To do this, we’ll have to disassemble the coach, hoping that the parts are not (too much) glued.

There are four clips on each side of the roof, plus a tenon at each end under the UIC rubber gangway connectors, which must be pulled apart or even removed. A credit card type plastic plate is enough to release the clips, which are snapped into the window panes. So, easy operation, unlike some other LS Models productions of the same time (“Trois pattes” — six wheel coaches) for example.

The window panes are blocked not only by the embedding of the windows into the body, but also by the clips fixing the doors, those for gangway (forming a single piece with the buffer beams) and those for passenger access, which are all inserts. This design makes it possible, depending on the series and the epochs, to mount doors of different appearance: big or small window, porthole or oblong windows. These doors must therefore be disassembled by pushing their clips back from the inside.

Then we just have to remove the windows from the body; they get out quite easily: they are not glued.

Once the windows are removed, the interior fittings get out without too much difficulty: they are only slightly glued and have tabs that clip on the tenons of the part under chassis. These tabs are keyed. Warning: then, the drawbars come out easily from their housing.

Here is the coach entirely disassembled. The pseudo heating cables are eliminated (it may be good to put a touch of paint on their tenons left broken in the body). I found other, more realistic, in boxes of… LS Models wagons (standard covered wagons in particular). It had amused me, but, in the end, they will be useful! 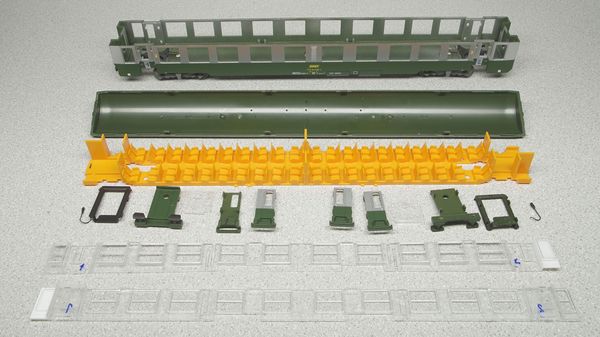 Note: the bogies are not present on the picture.

Finally, these coaches are quite well-designed, apart from the roof separated from the body… and the lack of stiffening of the body top, which undulates as it wants. We can find here almost the same design as for the DEV and UIC REE: a single piece for body and chassis, and a separate roof, which leads to a weakness of the upper body which cannot be reinforced due to the moulding impossibility. Same causes, same consequences.

A body moulded with the roof on a separate chassis would have been a much better solution, especially since here the perfectly flat walls would not have created an undercut problem. There is apparently a lack of engineers at model train manufacturers. They are probably too expensive!

Anyway, there will be no difficulty in painting the fittings or sticking printed paper on the panes.

One drawback: for the next coach that I disassembled, it was more difficult because certain parts (doors) were glued, which resulted in the breakage of some clips, but without significant consequence.

To facilitate the installation of the decors and the passage of the lighting wires, we must make some changes on the interior fittings.

On the floor, the reliefs due to the mould ejectors and the ribs that are on the platforms (hatchings) must be trimmed, using a cutter or a milling bit. We must also make two notches on the floor of the toilet (circle) for the passage of the wires.

By removing the ribs, one could fear some interior fittings distortion; this is not the case because it is held at the ends by the glazing of the gangway doors. 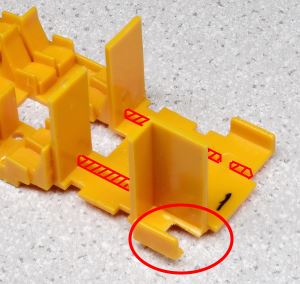 Modification of partitions between rooms and platforms

A support (1) for the lighting strip is glued over a platform wall.

To the other side, the lighting control circuit will support the strip.

At both ends, the “door” is fitted with a transparent polystyrene plate (2) which will support the corresponding decor. No need to glue this piece: it will be held in place by the self-adhesive paper. 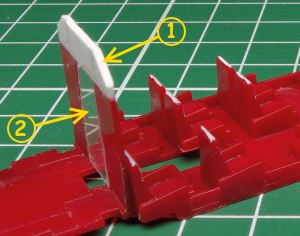 After removing the original central partition, trimmed to the level of the seat backs, a groove of 1 to 1.2 mm wide by 3 mm deep is made by milling to accommodate a transparent plastic (CD case for example) partition. This partition has an aesthetic as well as a practical role, to support the future lighting strip in its centre. 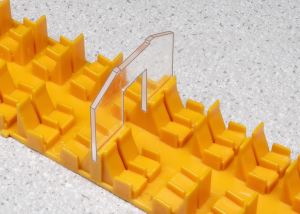 The window frames of the corridor wall are not vertical but have a clearance angle to facilitate demoulding: this is not really aesthetic. I thought I simply stick a decor outside, because inside the compartments it would have been much more difficult to proceed in the same way. But it was not satisfactory. So, I decided to simply remove the partition, and to replace it with a wall made of transparent polystyrene or PVC on which will be stuck a recto / verso decor. Note that in the picture, the headrests of the seats are already painted, but that the paint has already been damaged by the multiple handling. The painting and decor must obviously be done after the different machining.

The new partition is visible on the right.

Like for the 2nd class coach, the centre partition must be milled to accommodate a 0.1 mm thick Evergreen extension, which will serve to support the lighting strip. It is similar to the end extension, but is truncated to the corridor side.

The dimensions of all the parts shown here are given on page 6 of the PDF document, where you will also find the decors for the interior fittings (see below).

For both the floor and the walls, the dimensions must be carefully taken up to avoid any unpleasant surprises at the time of installation. To do this, I combine two methods: the direct reading with a triple decimetre and a calliper, and the reading on photos. I therefore take pictures of profile and top, telephoto (equivalent 300 mm for me) to have the view angle as narrow as possible, and taking care as much as possible the perpendicularity between the object and the axis of shooting.

Here is an example of these photos. The actual dimensions indicated allow, by simple rule of three, to determine other dimensions.

The outline is reduced by 0.5 mm with respect to the strict dimensions to leave a certain laying clearance.

Side walls for any coach

The notches are reservations for the passage of the roof clips; the latter should be painted in white for more discretion. The height of the decor exceeds that of the glazing on which it will be stuck by about 1 mm, otherwise the part situated above the windows would be too fragile. The overhanging part will be folded over the glazing.

Other walls for A4t4 coach

The upper row shows the corridor walls. Initially, I had planned to only decorate the exterior, because cutting and applying a self-adhesive paper would be too complicated on the inside. But, as mentioned above, I finally decided to replace the corridor wall with a transparent plate on which a decor will be stuck recto / verso. Therefore, this wall must be printed in duplicate.

The bottom row shows the partitions between rooms and platforms, recto / verso, then a toilet wall and an internal compartment wall. It displays places for photos and, in the centre, for a mirror.

These walls are not illustrated here, as they are similar to those of the A4t4, and simpler: only the end walls and the toilet walls.

As for 2nd class coaches, which are all equipped with an orange fitting, I will repaint two out of three in grey. I use a mixture of about ten parts of Humbrol Enamel No. 145 grey, one part of white No. 34 and a hint of blue No. 25. However, I find the result still too dark. May be two or three parts of white would be better. You’ll see pictures on the next page.

Painting is done with an airbrush, with a dilution of about 50% with Humbrol Enamel Thinners. To me, it is much easier to airbrush with Enamel than with acrylics (Humbrol or Interfer).

And maybe I should have also painted the 1st class chairs, because their raw plastic appearance is not very pleasant (see below)!

Laying decors on the interior fittings

I start with the floor covering, then the walls. For the compartments, the mirrors are stuck to the decor before the installation. The gluing of the new corridor partition is done last, as it is much easier to decorate and paint the compartment interior when there is no partition.

This result does not quite satisfy me, because the paper used, in combination with my Canon printer, gives a colour drift to the magenta: the supposed neutral grey is pink. I took it into account for future printing.

Another small flaw is the paper edge that remains white.

But all this is to put into perspective, because nearly invisible in the reassembled coach.

Installation of decors on glazing

No particular difficulty. We must only take care of the matching between the paper openings and the windows. The cut-outs for the roof clips are made after the paper has been laid, which is thus much less likely to tear. 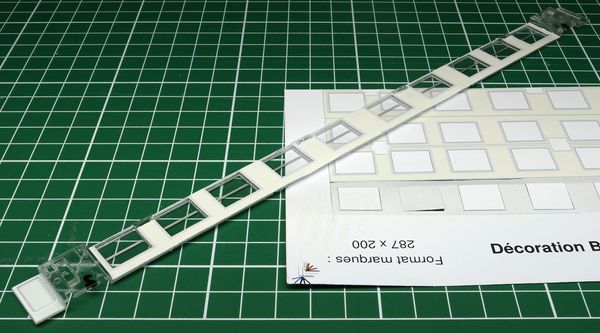