The known weak point of these coaches is the axle boxes plastic wear. The solution adopted by LS Models in the following series is to install brass bearings. This solution also makes it possible to pick the lighting current in a simple and frictionless manner.

Usually, I make my own bearings of thin brass sheet (0.3 or 0.2 mm) stamped in order to centre the bearing in its housing. But the problem here is that the axle boxes are very small: not enough space for a sheet metal bearing, and digging them for putting commercial bearings is a bit risky.

I own Romford bearings purchased at the time when micro-modele was still called Train Magique!

Here are the dimensions of these bearings: they are far too bulky in depth. On the other hand, the diameter is only 2 mm, whereas the housings of the centre points are 2.5 mm: attention to centring. 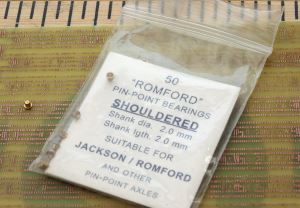 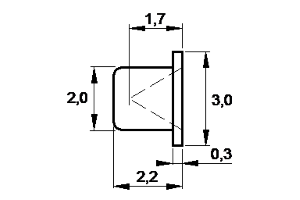 Thus, the bearings are vigorously reduced to depth by filing in a support consisting of a 0.8 mm thick circuit board drilled ø 2: the depth of the bearings will be reduced to this value of 0.8 mm, excluding the shoulder. 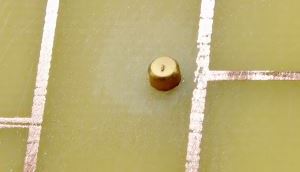 The bearing is so reduced that one can see the top of its conical hole. This hole must be deburred. 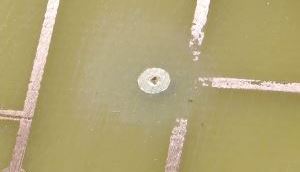 To allow the bearings to be pushed into the axle boxes, the housing is slightly and carefully deepened with a ø 1.5 mm spherical mill bit. 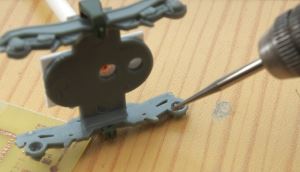 The bearings are put into place and then pushed down with a soldering iron if possible thermostatically adjusted at low temperature (125° C). Warning: the bearings sometimes go skew. I think it is due to a lack of milling. So, in this case, do not insist and dig the housing a little more. The ideal would be to use a flat iron tip, so-called screwdriver, which I don’t have. 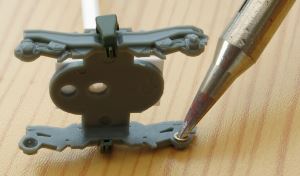 Despite the best possible sinking of the bearings, the original axle length of 24.8 mm is too big: the axle does not rotate freely. It will have to be reduced to 24.4 (value of the Piko axles for example) or even less. To do this, two solutions: either change the wheel set axles while keeping the wheels, or change the whole wheel sets, because the current wheels have a diameter of 10.9 for actual 10.6. However, on bogies as bare as Y28 D, without external brake equipment, the wheels are very visible, and mounting smaller ones can improve the overall appearance.

But why do I quote Märklin type axles, with non-insulated wheels? It’s because I chose another option. As I pick up the current by semi-axles isolated to the centre, I only need uninsulated wheels, and it is always delicate to replace the insulation ring with a conductive ring: tight manufacturing tolerance, risk of wheel bending, etc.

But the big drawback of this choice is that they are precisely wheels with Märklin “standards”, which are far from the NEM standard. Let’s assess:

I’ll have to turn those wheels… with no lathe.

With the Puller, I begin by pushing a wheel towards its neighbour, to get more grip on the axle and to be able to reduce the flange diameter of both wheels at the same time.

Some wheels, once out of the shaft flute, become idler; we must therefore slightly mark the axle (with cutting pliers) to lock them. 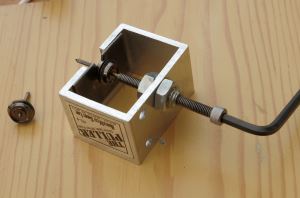 With a little more work, I decided to reduce the flanges to 0.7 mm. The width is reduced by 0.2 mm on the outside of the tread — the hub is left as it is. The whole is done with a file, the axle being tightened into the Proxxon milling machine.

On the left, at the top, an original axle, at the bottom, the modified, browned axle. It can be seen that the left bearing is a bit skewed. Must be resumed! 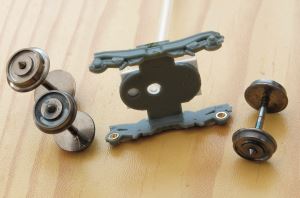 The rest has already been described several times: the axles are cut with a hacksaw and then slightly chamfered. They are joined by a 14.4 mm long sleeve made from a Bic ball pen cartridge. The length matches the distance between the wheels.

Using a ø 1 milling bit mounted on the mini drill set at low speed, a small groove is cut into the plastic of the bogie, above and close to the brass bearing.

The wire (strand extracted from a flexible cable), previously tinned, is soldered to the bearing side coated with flux, because we must proceed fast! If the solder flows inside, just remove the burr with a conical mill bit.

The wires are passed underneath the bogie crosspiece, through ø 1.0 holes drilled on either side, close to the side beams. They are then soldered on rectangular pads of self-adhesive copper, from which insulated wires will go and feed the lighting strip.

Click the photo for a closer view of the soldering. 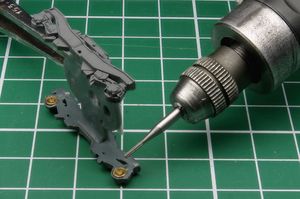 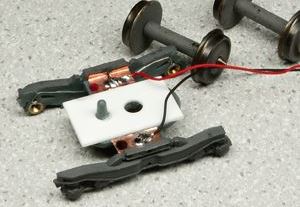 These consoles, specific to the Y28 bogies, connect the body to the bogies load-bearing crosspieces, via pendulum suspension connecting rods clearly visible in the picture below. The consoles should not be attached to the bogies, as MMM-RG did (maybe not the RMA?), then LSM-Heris and LSM “in short”, but to the body.

The reason for this choice is an easy solution, for bogies that pose real problems of running in curve. However, even Jouef on its Grand-Confort, or, more recently, LS Models on its Gril-Express, respected this feature — although it is not exactly the same bogie subtype (Y28 F). So, why not on USI coaches? 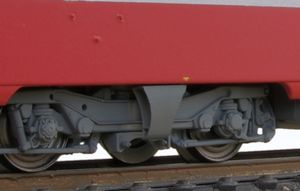 Here is a design drawing, which was reworked according to the first tests. On the left, the console as it appears on the bogie. Hatched, the parts to be deleted. On the right, the future implantation under the body.

Everything is done to give the bogie the maximum amount of travel: the console is thinned over its entire height and glued one tenth of a millimetre lower than the body. 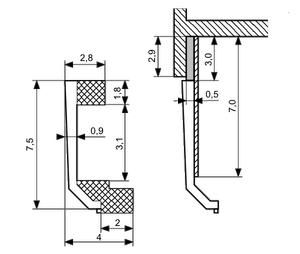 I used a watchmaker saw to slim the consoles! I’ll have to find a faster solution for doing this operation in series… Above the console, in grey on the previous drawing, is a 0.5 mm thick polystyrene spacer, 3 mm high and 4 mm wide (the latter value is approximate: one can cut with sight). These two parts are joined together by a 0.3 mm thick nickel silver reinforcement, from a photo-etched cutout drop. The whole is glued with cyano gel. 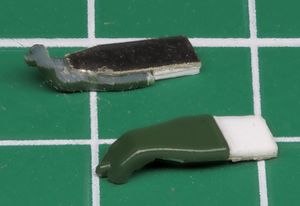 For the correct positioning to the bogie axis, I measured the distance between the part under chassis and the theoretical pivoting axis (which I recall is not the actual axis). I deducted the console half width. Result: 25.5 mm. So, I made a simple template made of 10 mm thick Styrofoam polystyrene, 25.5 mm by 31 (i.e. width under chassis). During gluing of the consoles, it is held in position by a thin double-sided adhesive. 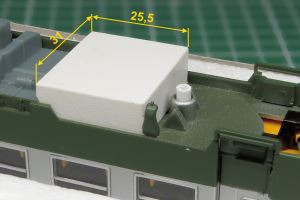 Then it is enough to glue each console leaning on this template, again with cyano gel. It can be seen that the bogie pivoting seems sufficient. A check on the circuit will allow me to observe that the minimum running radius is less than 400 mm, which suits me perfectly, since my curves never go below 500 mm. 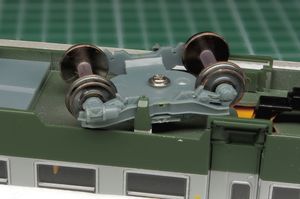 Here is the result, after painting the consoles, bogies and wheels in matte grey. It is a pity that the body openings are too long. But this correction would require gluing, filling and painting. I’m not a volunteer! 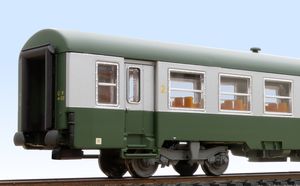