It seems that REE made a mistake on the decoration of its UIC coaches in C 160 livery, i.e. two-coloured, “garrigue” green No. 302 at bottom of body and roof, and “stainless” metallic grey in the window area. But if it were visible, especially in relation to the windows, that the grey strip was too low, it was difficult to quantify the error. Was it only a colour positioning mistake, or, more annoying, window positioning? Difficult to judge until FA57, a prominent member of the Loco-Revue forum, posted on the UIC R37 thread (the competitor!) a very interesting painting diagram.

I resumed this diagram by removing everything that did not concern our problem, and by colouring it slightly for the readability, then I made a small table of comparative dimensions, quite instructive. This is a 1st class coach, but that does not change the demonstration, because the yellow class strip is above the grey strip (it is not included into the latter).

It can be seen that all dimensions are false on the model. The most striking feature in the table is the excessive thickness of the grey strip under the windows (B dimension). It is in excess of 1 mm, which is quite a lot! And this strip is too wide by 0.4 mm (D dimension). 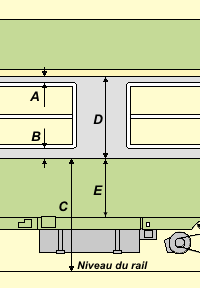 If we try to put up the green / grey limit by 1 mm under the windows to restore the B dimension, and to remove 0.4 mm to the D dimension, this gives these results. Miracle! Apart from the C dimension, not easy to measure accurately, and to a lesser extent, the E dimension — anyway, with much smaller deviations — everything becomes almost perfect! Explanations here.

Phew! REE will not have to remake their moulds (at least for this problem). It will be enough to correct the position of the grey strip. But why not make it right the first time? Could not one suspect a bit of haste to overtake a competitor? Bad for them… And pity for us, amateurs.

To end on a positive note, here is the coupling of an REE UIC B5D and an LS Models USI B10t. Both coaches are slightly too low (0.3 mm). The fact is that the downward shift of the metallic grey band of the UIC cannot be seen. So, could the USI coach be false too?

Note that the metallic grey of the USI coach is lighter and more reflective than that of the UIC coach, although this is not obvious here. But I am unable to say which is closest to reality (with a slight preference for the USI coach).

The dimensions C and E gain 1 mm, this is obvious. The B dimension loses 1 mm, that is the goal. A dimension gains 1 mm due to the upward displacement of the grey strip, but loses 0.4 mm due to its narrowing. Overall, it gains the difference, that is 0.6 mm.