A circuit on the terrace (2)

With evolutions every year, the circuit as described above worked for several years, but did not age well. The plywood became quite warped and in some places delaminated due to dampness (the modules were stored for the winter in an unheated garage). In addition, the user was also getting older: I found it increasingly difficult to move the larger modules.

Another trouble was that the agglomerated cork ballast base shrank significantly in some places, about 1 cm per metre. I think this is due to it drying out.

So it was time to redesign, with the following requirements:

I ended up choosing extruded polystyrene for the tables. Advantages: very good flatness, good rigidity (depending on the thickness, in my case 60 mm), easy to cut, cheap and, of course, very light. Disadvantages: fragile surface, complicated gluing, dusty machining.

For the edges, I keep the 10 mm plywood, but cut the widths to 8 cm for the visible side and 12 for the other. This way, I will be able to recover the old sides by eliminating the damaged parts (because I don’t want to redo everything from scratch). 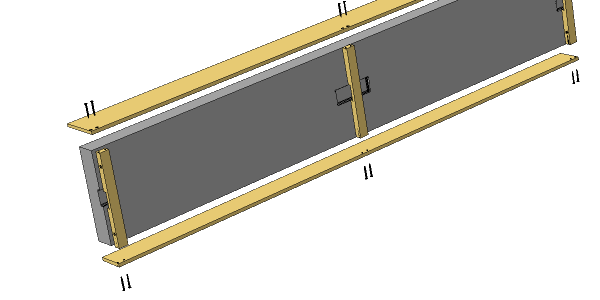 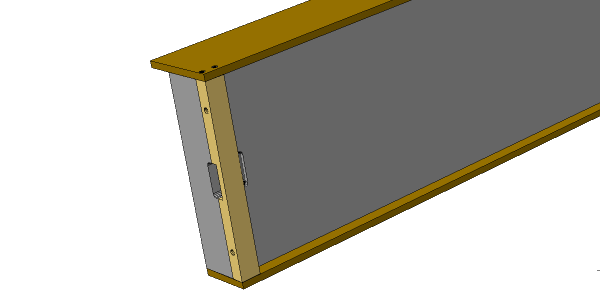 As can be seen in the drawings above, the extruded polystyrene board is fitted between the two plywood sides, joined by 20 × 35 mm cleats, all screwed together with stainless-steel torx screws. Not shown here, the sides are screwed to the board at approximately 40 cm intervals using special dowels. These dowels would not be suitable for hanging a load of course, but were perfect for holding the plywood edges to the edge of the XPS plates while the glue dried.

I bought a thermal cutter, but this tool proved to be unsuitable, even for curvilinear cuts. The blade is too flexible and doesn’t allow a perpendicular cut, which is a bit like a jigsaw. On the other hand, the cut surface consists of melted and therefore hardened polystyrene. In the end, a good cutter does the job better, provided you make several passes.

The problem of gluing

The first, which I thought was the best for this kind of work, was polyurethane glue. So I bought a cartridge of Sikaflex High Tack.

A sample of XPS is assembled on a piece of plywood, clamped and left to dry overnight. Disappointing: easy to pull off by hand. The glue stays on the plywood, nothing on the XPS.

Later, I tried to glue a module with this glue: same punishment, nothing held!

So, reluctantly I admit, but on the advice of many DIY sites, I settled on vinyl wood glue. My big doubt was about the possibility of water evaporation and therefore drying, especially if I needed to glue two pieces of XPS together.

I chose the Pattex wood waterproof. It is supposed to bond laminate to wood in 40 minutes, but there is no mention of the possibility of bonding polystyrene to itself. It did however give satisfaction, although for the moment I don’t have any experience on the duration. You just have to be patient and let it dry for at least 24 hours under clamping, which can be restrictive.

One disadvantage is that the dried glue is very hard — it really has no flexibility.

For assembly, I had to buy new long clamps: 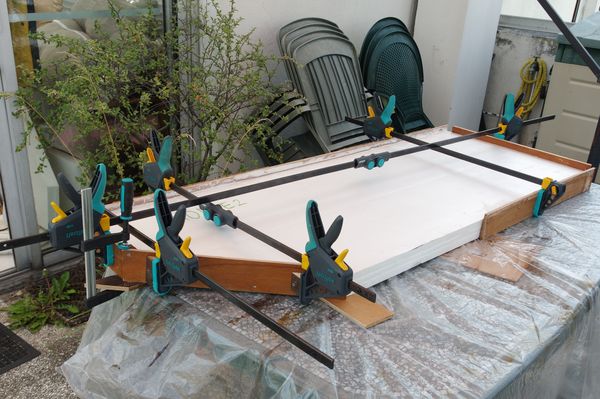 Do not forget to use spacers to distribute the pressure, otherwise the XPS will crush! 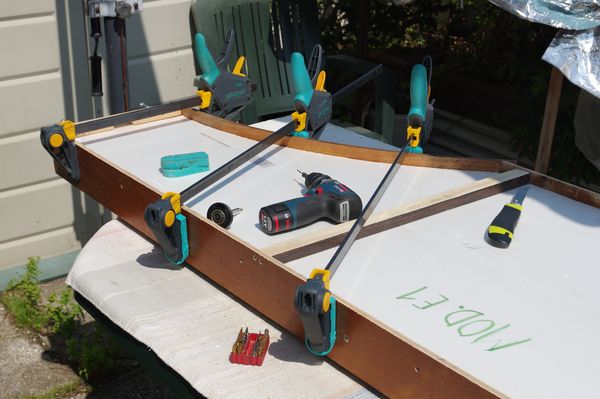 For oblique clamping, triangular wedges are temporarily screwed in.

The use of clamps was combined with the use of the dowels mentioned above.

The gluing of the tracks — both the cork ballast on the polystyrene and the sleepers — was done with the same Pattex wood glue, without any problems.

For one module, I tested the use of Tramiband as ballast, which is, and I quote, a high resilience closed cell polyolefin foam strip with an instant adhesive. It is used to seal and insulate between the rail and the floor in partitions (on metal frames, I would add). Disadvantage: this strip is covered with a non-stick film that completely prevents the track from being glued. This film must be peeled off after the Tramiband has been stuck to the substrate. I think that this strip reduces rolling noise, but I was unable to check this because I did not have a sound level meter.

The Tramiband thickness is 3 mm, and its width 45 or 65 mm. The track is glued with Pattex wood.

Difficulty of installing the turnout motors

I use servo-motors connected to the turnout bolster by a crank rod. But here, with the thickness of the support (60 mm, I recall), this transmission became too long, and the servos became very exposed, since there is only 2 cm of space left below the modules.

So I kept the plywood support in the turnout areas, fortunately few. This solution also had the advantage of allowing a good part of the wiring to be done before installation. On the other hand, it was necessary to cut the XPS quite precisely, and then glue wedges to it so that the plywood plates were perfectly level. 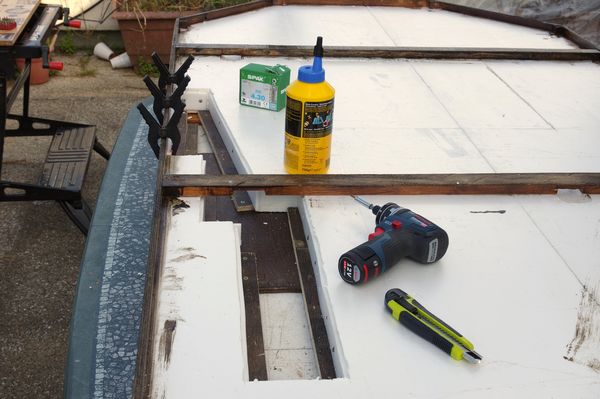 To ensure the position 10 mm below the surface, strips of plywood are temporarily fixed just below it. The supports are 6 mm thick XPS strips, glued and held in place during the drying process by stainless-steel screws, moderately tightened of course. 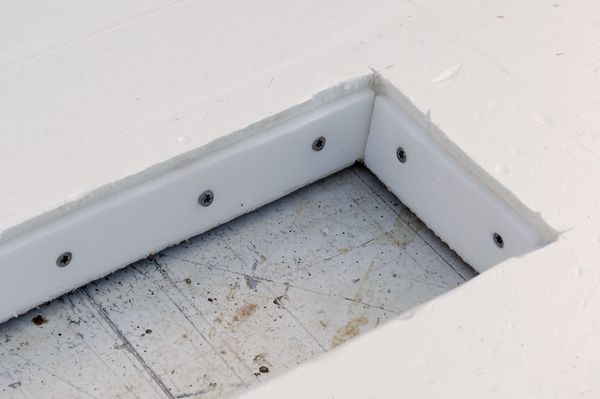 Cleats are also screwed / glued to the ends, to ensure fixing the turnout plates with stainless-steel screws. 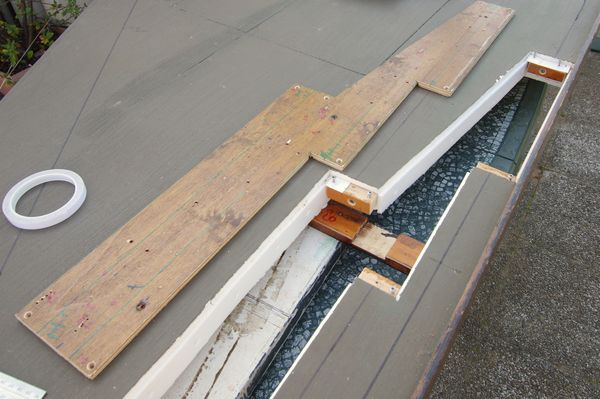 The use of printed circuit board servo supports was no longer justified. They are now fixed by their own flange, with chromium-plated brass spacers between them. 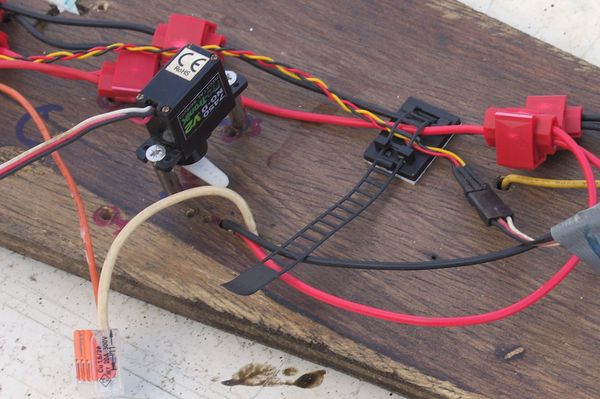 Wiring is done using two types of connectors as shown in the picture above (no more connecting blocks, except for connecting the modules):

The latter can be mounted with a simple universal clamp. Although not recommended, they allow disassembly and reassembly in the event of an error, by removing the fork that makes the contact.

The wires are held under the modules with two types of supports:

Although the adhesive of these supports seems quite strong, I preferred to reinforce it with a screw fixed in the polystyrene, even if the tightening is necessarily limited.

Here is the result of the wiring of the turnout area of module A.

A close-up of the Switchpilot Servo that manages this turnout area, showing its attachment by an M6 stud and a knurled recovery nut. This, together with the connectors, which are all pluggable, allows for quick disassembly: these devices will be stored away for the winter! 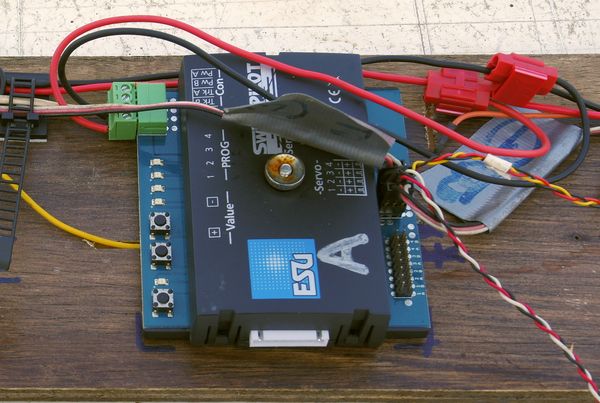 Another advantage is that it allows, at the cost of a few extensions on the servo cables, to take out the Switchpilot for programming the turnouts with the little push buttons, as I explained elsewhere.

Some pictures of completed modules 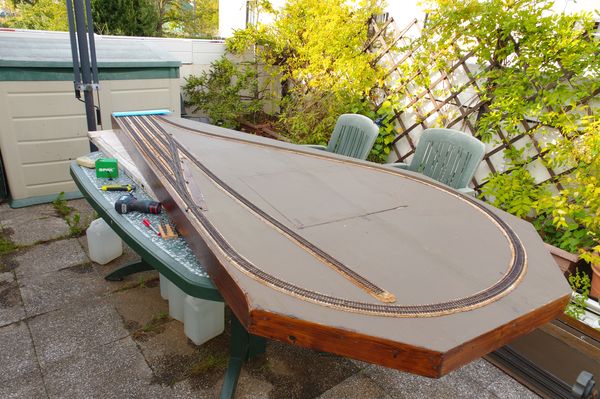 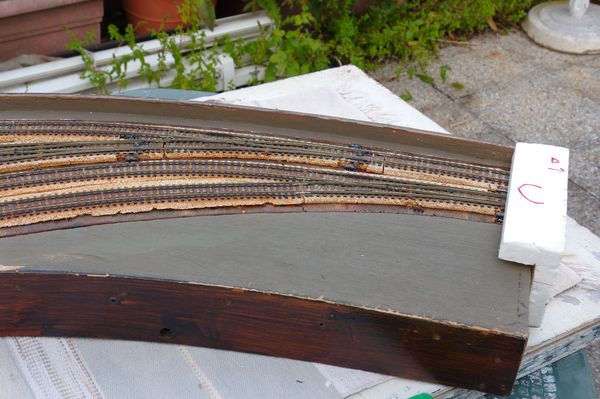 Note the end protections in cut and screwed XPS.

On this module, the tracks have been redesigned again, to make them as long as possible, and to avoid a portion of the curve with a very tight radius that was causing derailments. You can see this curve just in the centre of the picture. The curve is still quite severe, but less so than before. The curve in question is drawn in a thick line on the diagram below. 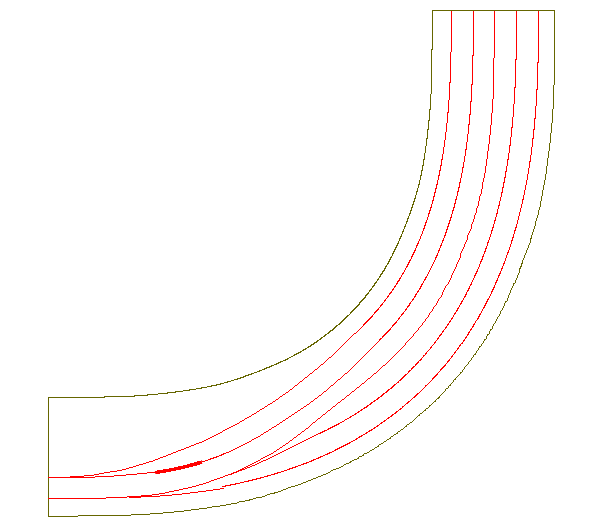 Bottom of the same: 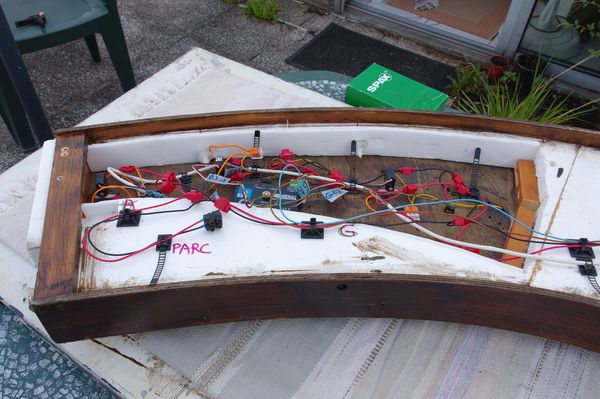 The wiring may look a bit confusing, but it is difficult to do differently, and it is still quite simple.

Module D showing the use of Tramiband: 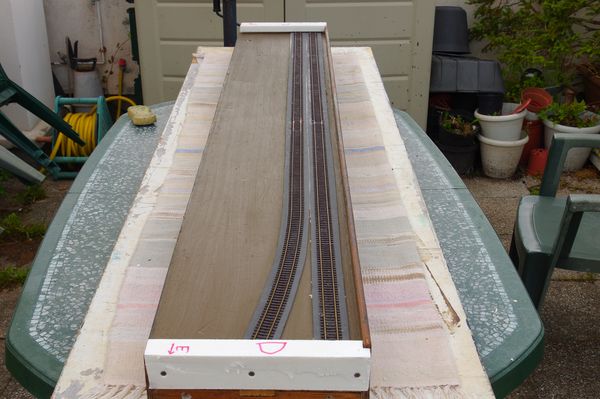 You can notice the beginning of the curve of the racket which allows a bigger radius of curvature in it.

Small summary of the accessories used 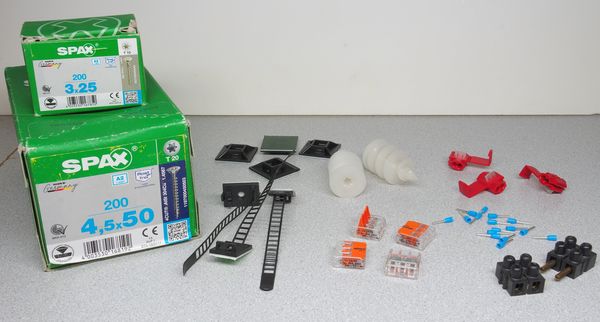