First point to check: are the distances of the insulators the same? Answer: yes! These insulators are not very pretty, besides, with many moulding burrs.

The pantos fixing bosses are 4 mm diam. I remove the greatest part with a diam. 5 mm drill. Ideally, I should finish with a 4 mm diam. cylindrical milling bit, but I don’t have one. To avoid using a putty (I don’t like it!), I finish with a 4.2 mm diam. drill by penetrating a little in the roof, then I put a 4 m diam. plastic card pad, 0.25 mm thick, cut with a punch, and glued with Kibri model glue, which, by melting the plastic, will somewhat fill the remaining gap.

A bit of Humbrol paint, a mixture of dark matte grey No. 32 with a little white No. 34 and a drop of blue no. 14 will do; the painting will be polished after drying. The result (a) is not too visible, is it? On the other hand, I see in the photo that it would be necessary to fill the tapped hole, and to shorten the jack rod… 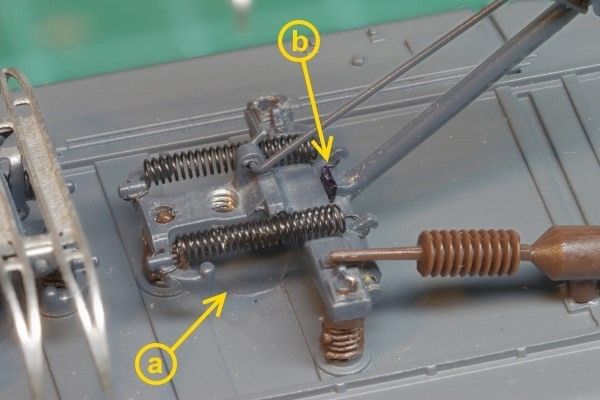 There is no difficulty in gluing the pantos to the insulators with Kristal Klear. This gluing is weak, but better is detached panto than broken panto!

Limiting the extension of pantographs

Here, we should not have drunk too much coffee: we’ll place a stop to limit the extension of the pantos. A small rectangle of plastic card 0.35 mm thick, approximately 1 × 2 mm or less, blackened with a felt pen for more discretion, is kept stuck by the stop of the main arm, panto raised, and glued with a micro drip of cyano (mark b on the picture above). Do not overflow, otherwise the panto may not be folded anymore!

About cyano, I noticed something, but maybe I reinvented the wheel: a drop on waxed paper, the kind used to protect double-sided adhesives, remains usable for about ten minutes! It even tends to roll over like a drop of water.

And here is the final result. 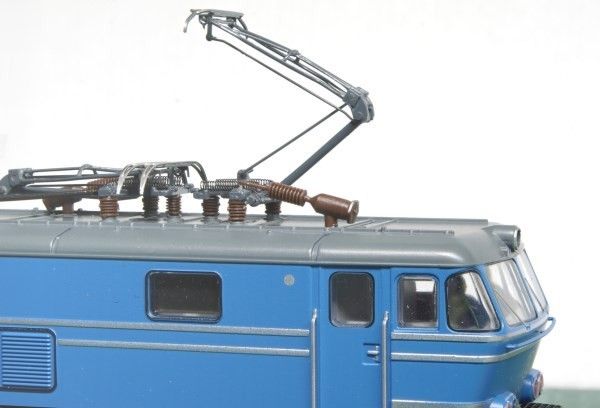