For a “budget” model at a relatively modest price (€140), the engraving is quite fine, except the steps.

A cab lighting is even provided, powered by a small circuit board fixed under the roof. It is in contact with the main circuit by two flexible blades. On the other hand, the white and red lights are not separated, which actually prohibits the hauling!

But I did not expect a certain sophistication of the electric functions, which cannot be found in more expensive models.

The body is easily removed, spreading the flanks and sliding plastic cards. We discover then a double-sided printed circuit quite simple. Here is its visible side:

And the hidden side (returned by CAD to allow its superposition with the first one):

At the bottom, the two yellow wires are connected to the loud-speaker; the orange and grey wires to the motor. In this regard, I would like to point out that, at least on my copy, the conventional running direction is reversed. To restore it, two solutions: either swap the orange and grey wires, or set the bit 0 of the decoder’s CV29, i.e. add 1 only if the current value is even (if this value is odd, the bit 0 is already set). I chose the latter solution, because I realized the fact only after having reassembled the machine.

The decoder connector is surface mounted, which will facilitate the connection of additional wires

The two large metal pads are used for connection with the cab circuit. The upper pad is the positive common, the lower one is connected to the decoder AUX1 output via a 1.5 kΩ resistor and a capacitor.

Under 12 V DC, when slipping, the locomotive consumes 700 mA in forward, and 570 in reverse. So, a big dissymmetry that will perhaps be mitigated by running in. At blocking: about 1.2 A.

Modification of the printed circuit

Note: the notation concerns the use of an ESU Lokpilot or Loksound decoder.

Separation of red and white lights

To separate the lights, I wanted to avoid cutting tracks. It’s better to keep the circuits intact for the guarantee in case of need. Simply unsolder the (white) wires of the red LEDs to connect them directly to the decoder connector. I chose to connect these LEDs to the decoder AUX1 and AUX2 outputs.

Since the current wires are too short, they must be extended. I avoided the traditional solution of point-to-point soldering and heat-shrink tubing protection by using two small pieces of self-adhesive copper that serve as additional pads on the board.

Attention: as it has been said, the AUX1 output is currently connected to the big lower pad. It will be necessary to isolate this one with adhesive tape. Here are the connections to make.

Note: I unintentionally connected AUX1 to the front lights and AUX2 to the rear lights. To get the usual operation, it would have been better to do the opposite, so swap the connections on the connector (bottom, AUX1, above, AUX2).

To make the solders on the connector, which are very close to each other, you should use a special SMD tip, very fine. You should also tin separately the pins and the wires. Soldering wires to pins will be done without additional tin, to avoid any risk of bridging.

I wanted to be able to control the cab lights separately. I will use the decoder AUX3 and AUX4 outputs (this excludes the Lenz Silver+ decoder, which has only five outputs in all, while we need six). But these outputs are unamplified (at least on Lokpilot/Loksound V4.0), and therefore cannot be connected directly. On the other hand, the cabs are originally controlled together because the LEDs are connected in parallel.

So I will make a circuit to replace the existing one. However, the connection will have to be modified, since it will require four wires: the positive common, the negative common (“ground”), and a wire for each cab LED. To avoid hampering the lifting of the body, I plan a connector made with 1.27 mm pitch pins.

Here is the connection of these wires on the decoder connector.

Close-up view on the connector. 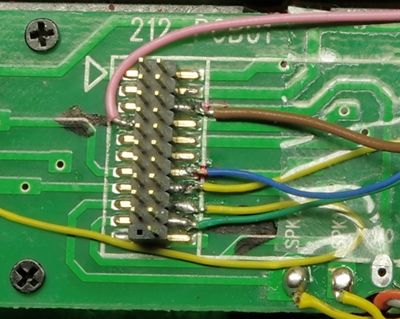 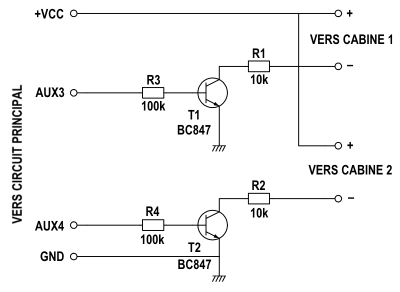 The circuit has exactly the same dimensions as the original. So there is no installation problem. It uses bipolar transistors NPN BC847 that I had on hand. I will just have to take precautions when soldering the wires from cabs, to avoid damage to the body.

Regarding the resistors in series with the LEDs (R1, R2), on my circuit, I used values of 4.7 kΩ, but this gave a really too intense lighting, and I had to adjust the dimming to the value 2 on a range from 0 to 31! For a more realistic lighting, 10 kΩ resistors seem a minimum to me. You can go up to 47 kΩ. But it’s to everyone’s taste. You can always adjust by programming.

The male part is to be connected to the new circuit, the female part to the main circuit. The wires must be long enough to disassemble and reassemble the body easily. A length of 50 mm seems suitable. The soldered pins must be insulated with heat-shrink tubing. Once connected, I wrapped the entire connector into a piece of electrician tape.

Top, the body with the cab circuit. Bottom, the chassis with the original circuit.