The Makette drawbar’s NEM box is not shaped, but left flat. The brass tube will be soldered to it. It must exceed of 4 mm from the end. At the end of the operations, the external parts may be cut.

The box and drawbar are held on an epoxy plate by means of a modified clothe peg. The positioning is done on the basis of the folding half-etchings of the box. There should be 0.5 mm between the back of the two pieces. Flux is dropped, then soldering is done, first on each side, then at the front.

To easily and correctly align the locking loop made of ø 0.4 mm bronze wire (width: 6 mm, length of the branches 13 mm), the connectors are trial assembled in the boxes and assembled to each other. The loop is positioned in its groove. The assembly is turned upside down on the epoxy plate and then held with the clamp. It is then easy to solder the two branches of the loop.

It might be possible to solder the three parts at the same time, but it seems acrobatic to me. 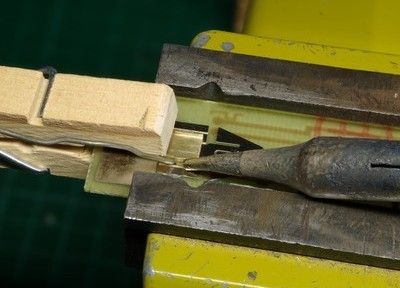 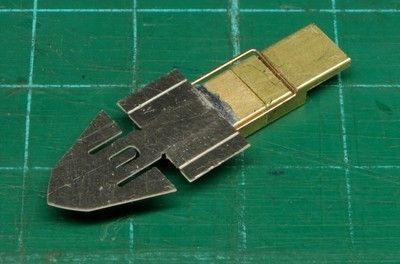 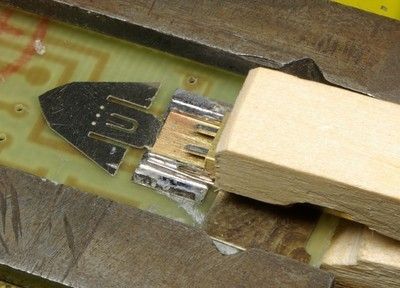 Gluing of the connectors

The 2.54 mm pitch connectors are standard male connectors, but the tulip female connectors are somewhat less conventional: they are not those of the integrated circuit supports, which are not suitable here. These connectors’ thickness must be slightly reduced by about 0.1 mm, in order to fit into the brass tubes. A few file strokes on each side are sufficient. In this way, the connectors hold almost on their own into the tube. They must be positioned in such a way that the rear of the connector (male and female) is flush with the milled part of the box back. To glue them, place some glue on the back of the boxes, and insert the connectors from the front. Thus, there is no chance that the glue fill the alveoli. I use Uhu Strong & Safe glue. Before gluing, chamfer the front of the female connector to facilitate its entering into the opposite tube when coupling.

Here is a view from below of couplings mounted on coaches, before and then after coupling. This one is a prototype not very well-made. In addition, I did not use new Makette drawbars, but used ones from a previous test. The appearance of the whole is not necessarily very neat. 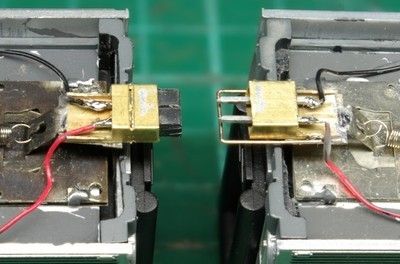 Concerning Makette drawbars bases, as I put a little bigger wheels on my RIB, I had to grind the base’s back to avoid any friction. It is necessary to remove the rear lugs and to put a little solder to keep the parts together. It is also necessary to modify the hook of the return spring which hinders at the rear. 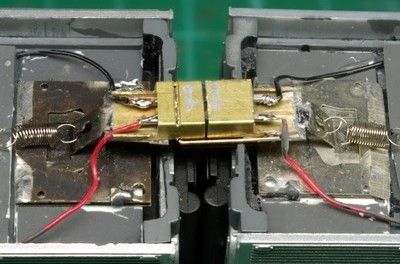 Note: there is an extra useless groove under the box…

With those inter-penetrating parts, the coupling rigidity is very good and, under the condition of an adjustment of the locking loop, the uncoupling behaviour is correct, while allowing a not too difficult separation of the coaches.

The relief of the bean-shaped hole must be trimmed, and the buffer beam thickness must be reduced to 1.5 mm. Next, a 27 × 14 mm plate must be glued to adjust the height. I used Evergreen 0.75 mm thick polystyrene sheet, but may be a thickness of 0.5 mm would have been enough. 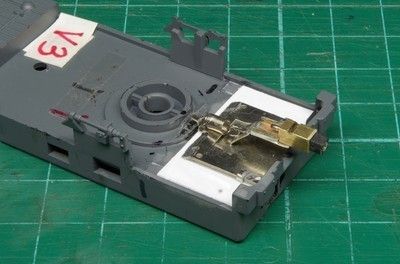 Note: this picture is from a previous test, with a single-pole connector.

The bases are glued with Uhu Strong & Safe. It remains to connect the wires coming from the lighting strips to the connectors — this is already done in the pictures above.

It is advantageous to glue the wires to the edges of the boxes, to avoid fatigue at the soldering point (fatigue — and resulting breakage — which I have often observed on industrial products, such as the ABJ Electrotren and Picasso Mistral).