Concerning intermediate couplings, I initially used very much modified Ribu boxes, but the result was not satisfactory because the elongation kinematics was no longer respected and the return springs had become traction springs so that the train played the accordion in acceleration, all the more since the driving trailer opposed a considerable running resistance, with its current pickup strips. So, I then decided to use large size Makette drawbars.

But using NEM boxes was not possible because it was prevented by the very forward and also too low position of the drawbars (because of the bogies). It was also necessary to ensure the train’s electrical continuity.

I first tried a complicated system of double connector extensions, which would have made it possible to turn a coach without reversing its polarity. But it was useless for such a train whose composition in service is normally immutable.

So, I imagined cutting the NEM boxes that had become useless and replace them with a brass tube long enough to ensure the coaches rubber gangway connectors junction. Here is the fruit of this cogitation…

NB: if you are interested in knowing what I tried with the Ribu drawbars, you can consult this page.

So, I tried a 3 x 6 mm rectangular brass tube coupling, which will be relatively simple to make. Here are two aspects of it:

The problem of locking is solved with a bronze wire loop. This loop was initially placed under the boxes. In use, I found that it was better to place it at the top, because it thus prevents the couplings from bending during the coupling. 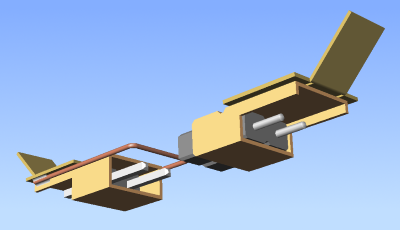 Note: I had first tried with a square tube and a single centred contact, the tube acting as the second pole. But this solution posed a certain number of problems: short circuits between the base of the drawbar and the wheels, bad contact between the two boxes facing each other.

Drawing of the coupling

The brass tube is milled (ø 6 milling bit) across every 12 mm to a 2 mm depth. Milling is required for each half coupling. The tube is held between two 10 mm thick plywood jaws which have been grooved together with the same ø 6 milling bit, to a 2 mm depth. When machining, the wood is notched, but it does not matter. 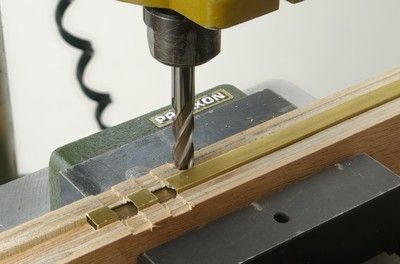 After turning the tube upside down, the locking grooves can be milled, every two boxes. For this, I use a PCB engraving milling bit.

Finally, the tube is cut with a “Bocfil” saw in 12 mm lengths, then rectified to 10.5 mm with the milling machine to obtain the dimensions indicated above. 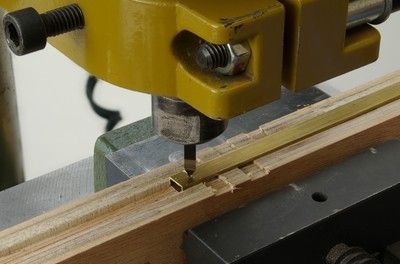