It is not very brilliant!

Finally, we will add an interior lighting, which will pose the problem of the electric junction of coaches, because this lighting will be controlled by a function decoder.

I bought ø 9 mm axles at micro-model. Only trouble, the length between axle ends which is different from the original (24.75 mm instead of 24). And impossible to interchange the wheels because the diameter of the new axles is only 1.5 mm.

It will be enough to grind 3/10 mm of the point on each side, with a diamond or corundum disk. Be careful, however, to carefully deburr and even round the flat with a file. The diameter is now practically correct, and the flanges are considerably smaller (1.1 mm instead of 1.3).

There are two cases to consider: that of the end coach that will be coupled to the machine, and that of the intermediate coaches. For the first, I did not want to cut the buffer beam and the bottom of the body.

There is the SMD system. These drawbars are sold in pairs, whereas only one is needed a priori. But RIBs often circulate in double. You’ll then necessary have to order two bags if you want to make a realistic train. 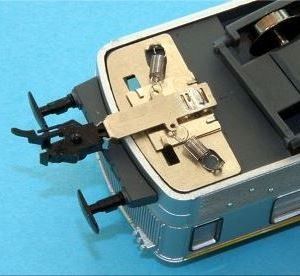 There remains a doubt: the SMD drawbar is actually a Makette small model, and I am not sure that its elongation will be sufficient. A first test with a suitable Ribu coupling with significantly more distant pivot points showed a buffer mess when pushing the train with the BB 16500 LS Models, despite spiral entry curves, a minimum radius of 500 mm, and large radius Peco turnouts. Temporary parade: the machine is fitted with an adjustable coupling (NEM 363) which puts out the buffers by more than a millimetre.

This is the KKK1 model whose base is 16 × 16 mm. But it cannot be mounted under the chassis: the ultra thin SMD model itself comes flush with the bottom of the body. But let’s get inside. There is in the head coach (or tail?) a large empty place at this location. It will suffice to cut a large enough hole in the bottom to let the drawbar pass through, and to tinker a fastener for the return spring that will be underneath.

In order for the drawbar to be at a suitable height (and also to plug holes resulting from previous tests), I have glued a 0.75 mm polystyrene plate over the frame base. The assembly is then milled with a rectangular hole, and its rear edge is milled (by hand) at an angle to give way for the return spring. 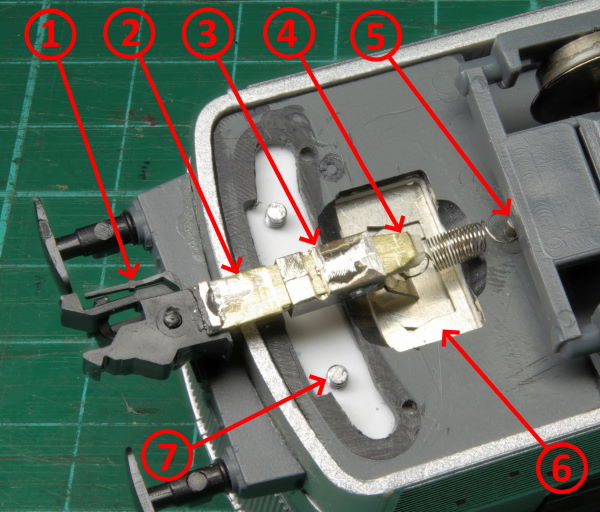 As it passes under the body, the Makette NEM box is not at the correct height. SMD has solved this problem by providing a dovetail, which is not easy to make by hand. I use another technique that consists of soldering on a brass strip two 2.54 mm pitch PCB pins. This strip, narrowed at the back to fit into the NEM box, will be locked into it with a little soldering.

The Profi head (but this is valid for the Roco heads and probably others too) receives two ø 0.8 mm 2.54 mm spaced holes, 1 mm from its end. Its tail is then cut. The head is finally mounted onto the CI pins. 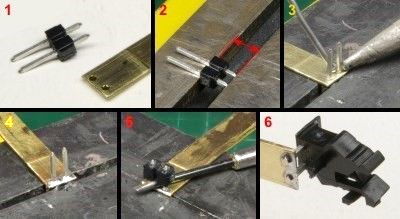 The advantages of this technique are that it is possible to adjust very easily both the drawbar length and the head height. And the holding is much firmer than with a dovetail head.