A few words about the Ribu drawbar casing, the design of which is, to say the least, strange (see picture below, on the left): firstly, the drawbar return springs consist of protuberances moulded with the drawbar, which extend out of the casing when the drawbar pivots. In addition, they relax and do not completely return to the centre.

Then, the drawbar begins its rotation not on lateral pivot points, which is the principle of variable elongation, but on a point in the axis, so without elongation, this for about half the stroke! So its elongation is very insufficient.

On this basis, I had tinkered the drawbars (picture above right and drawing) to get a suitable elongation, but without proper guidance, as the new position of the drawbar in the casing is pushed back by about 2 mm, which forced me to add a strong return spring — thus becoming a traction spring (in fact, the original Jouef drawbar’s) to avoid coach spacing in operation. 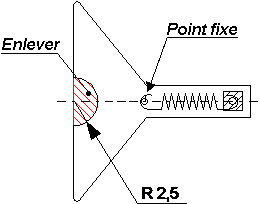 This time, the casing containing the elongation system is mounted on top of the chassis, still without cover. But its thickness nevertheless required the planing of the interior fittings. The return spring is therefore mounted under the chassis. Two tulip contacts are glued directly into the NEM box. This requires the machining of the latter. The wires are soldered into the female part (before the connector is glued into the box), pass freely under a small plastic card, and then penetrate the chassis through an existing hole. 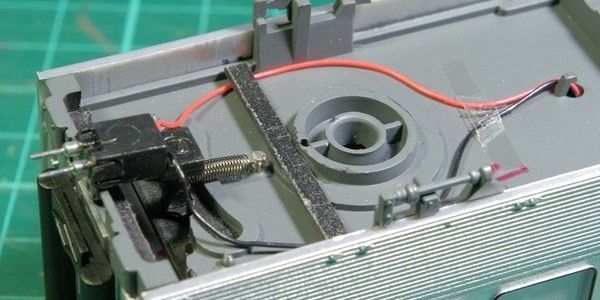 In the facing coach, the same device is provided, but female side outward. The spacing between the two connectors requires an extension also made of a tulip bar. It works well, but I was hoping that the connector retention strength would be sufficient to hold the coupling. This is not the case: as the elongations progress, the two boxes end up separating. So, it will be necessary to provide a lock.