Trailer board and tail lamp circuit

The circuit board replaces the original lamp circuit, with the same dimensions, but it only includes the rear lights resistors. Since these LEDs are the same as the motor car’s, the resistor values are also the same.

The tail lamp circuit is visible on the same photo. Its only peculiarity is to be equipped with two lugs to be inserted into the chassis milling of which it has been spoken previously. The back of the board and the LEDs sides are painted black: always light leaks… 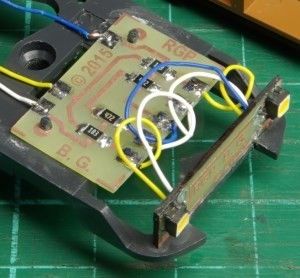 Note that there was an error on the drilling points for the holding studs, error corrected later on the documents.

Wiring of the trailer

This wiring will be simpler than the motor car, because the plastic chassis has more uniform surfaces. To connect the front to the back, I use pieces of self-adhesive copper tape. Obviously, they must be isolated when passing on the ballast. I do not trust the layer of glue for this isolation. Electrician tape, here blue, is therefore first stuck to the ballast. On both ends of this one, the plastic chassis is isolated, thermally this time, where the soldering will be made, by pieces of 0.8 mm thick non-copper plated board with a point of cyanoacrylate or Uhu Strong & Safe.

Note that there are only three wires concerned, because the green wire is directly connected to the light strip.

Browse the image with the mouse to get a more detailed view.

To say it right away: it would surely be much easier and quicker to install a commercial four-pole electrical coupling. It has the advantage, by its symmetry, to allow coupling to each side of the same vehicle (which would not have an extraordinary interest here). But, given its size, I’m not sure it can work without stopping somewhere.

And here is mine, seen from below: 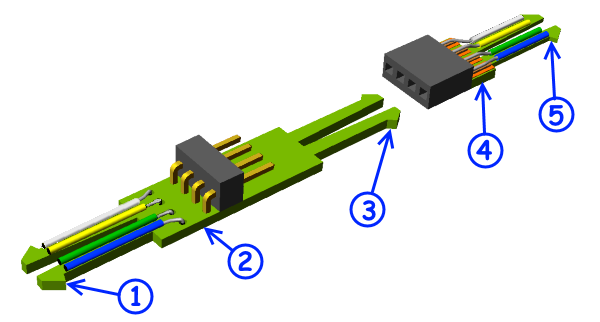 This coupling, of the rigid bar type, is made of 0.8 mm thick epoxy. It consists of two parts:

The most difficult to achieve is the tormented shape of the dovetails. Even if you have a digital milling machine, which is not my case, you will have to file the re-entrant angles, which must be sharp.

Then, soldering the wires (at 1.27 mm pitch) will seem a bed of roses.

With regard to the installation into NEM boxes, whose minimum internal height is 1.7 mm according to NEM 362, it is necessary to consider that the total thickness will be composed: 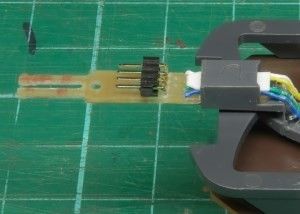 Here is a view of the coupling of the two coaches. Too bad there is an interval between the bellows; it would suffice to push a little more the buffers into their bushel. To be studied… 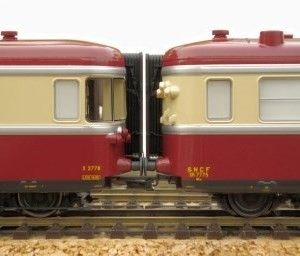 Click the image to have a closer view of the connector.

Note: based on the above model, I studied an electric coupling using professional components. See the article.

I forgot to mention it, even if it goes without saying: the light guides of the lamps have to be removed, but their ends must be cut and put back in their housing.

When removing an axle from the motor car, for example, to change a tyre, be sure to disassemble the brake linkages — which should not therefore be glued — as they may be damaged by the protruding hub of the wheels.

As for the Kheops type plugs, very hard to mount (but there are extra parts), they must be placed with the small outgrowth down (not obvious on the instruction sheet), as evidenced by this picture. On the way, we see that Roco has “forgotten” the tail lamp holders.

References of the components used

For LEDs, the supplier is the LED-Megashop shop on ebay. Prices vary according to quantity.

The bicolour LEDs, which are given for a colour temperature of 2700 to 3500 K, are, at least for mine, closer to 2700. Used alone, this would not be a problem. But in comparison with the frontal headlight at 3500 K, the difference is visible! I have more or less solved this problem by inserting for the latter a yellow filter cut out of a notebook protector.

For CMS resistors, I found a distributor in Poland whose prices are practically half lower than the lowest I found in France (€0.76 per 100 pieces of the same value, price 2015). Only small problem: the approximate translation of the site in English. This is Transfer Multisort Elektronik (TME). There is a very interesting feature on this site, which I would like to find elsewhere, especially when you have to order many articles: it is the possibility of sending them directly an Excel file, or a text file with separator, respecting of course some constraints on the columns order and contents.

The 1.27 mm pitch connectors are purchased from Conrad.

According to the LED-Megashop shop, the bicolour LEDs proposed have their two diodes (red and white) oriented to the same direction. However, when I bought them in 2013, they were in the opposite direction, with the same reference. The tail lamp circuit of the trailer is valid only for the head-to-tail type!