In order to power the trailer, it will be necessary to pass wires along the motor car, six wires to be precise (two for current pickup by the rear bogie — black and red — and others, blue, white, yellow and green, for the trailer lamps and lighting). The best solution I found is to mill a groove into the chassis. Width and depth: 2 mm. I did it only on one side, but it would have been more convenient for the wiring to make two symmetrical grooves.

To prevent chips from falling into the transmission, which was copiously greased, I disassembled what was possible: printed circuit board, motor and its gimbals, and protected the rest with adhesive tape.

The zamak is easily machined. As a precaution, I lubricated with “WD 40”, which posed some difficulties when I had to glue the wires!

For future wiring of the front lights, we have to remove the internal partition (B) which divides this cab in two, and enlarge the housings (F) by about 0.5 mm, through which the light guide passes and where will be placed the bicolour LEDs. 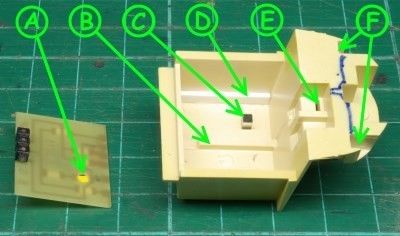 Inside the cab, two strips of plastic card (D) of about 5 mm wide are glued to serve as holds for the future PCB visible on the left with the upper front light LED (A). But let us not anticipate… Let us also note that the light guide is shortened (C) to exceed the “ceiling” only by 4 mm.

I roughly drew with a felt pen the path of the wires which will connect the LEDs to the circuit. This is actually the current path of the light guide: so, I’m sure there will be enough place.

I also sawed the pedestal (E) of the driver’s chest, very visible from the outside and of a too Germanic appearance, to replace it with a more Frenchy, whole character (i.e. having what he needs to sit) and without a cap…

As long as the parts are separated, let’s take advantage to cover the top and inner sides with black electrician tape to minimize light leakage. For the same purpose, a rounded piece in the shape of the body, black plastic (CD case!) or black painted Evergreen is glued (Kristal Klear) above the window panes (placed below it would be easier to set up, but it would be visible from the outside). Similarly, the desk and the bosses covering the future LEDs locations are painted black. 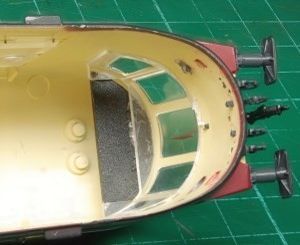