For the interventions considered, everything must be disassembled. As already seen, lifting the body is very easy. If it holds on the chassis, it is enough to spread it gently at the clips’ location, behind the doors. So, there is no difficulty, except that the chassis must first be taken out from the intercirculation side, then only after from the cab side, by moving the chassis back a little, because the interior fitting overhangs the light guide of the rear lights and risks are to hang it.

OK, it’s not mechanical, but what’s done is no longer to be done.

Due to the heavy friction that limits the speed of the train, I decided to remove all the trailer electrical pickups and replace them with an electrical coupling. I therefore unsolder the wires off the lighting circuit, to remove the bogies and all the pickup strips, which are sandwiched between the bogie girders and plastic closures. These should be put back as they contribute to support the chassis. I also remove the moving parts of the inverter switch, which are clipped on the axles.

The rear printed circuit board, which bears the tail lamps, is removed too.

There is little to change: the wires’ path towards the coupling and the improvement of the elongated drawbar guidance which, due to the passage of these wires, will tend to escape, blocking and causing derailments. I noticed the problem through testing.

The wires’ path concerns rather the interior fitting: close to the bogie pivot is a rectangular opening (in dashed lines on the picture) which was already used at the origin for the wires to pass towards the lighting strip. But now, the wires will pass between fitting and chassis. Here, the fitting is stuck on the chassis. It is therefore necessary to enlarge the opening to reach a place where there is sufficient space.

As for the drawbar, it must be ensured that its pivoting legs remain well stuck. First, as I lowered the pivot height by 0.5 mm to bring the trailer to the same height as the tractor, I also trimmed the thickness of the L-shaped mouldings of the chassis, which serve for pivoting (there is still enough backlash). Then, 0.5 mm thick Evergreen pieces in the shape of a curvilinear rectangle (green dotted lines) are glued as an extension of the L, and then, over the whole, 0.25 mm thick rectangular pieces. Be sure to proceed with the drawbar in place, as it would be difficult to put it back afterwards. Also beware of the excess glue that could block the drawbar! 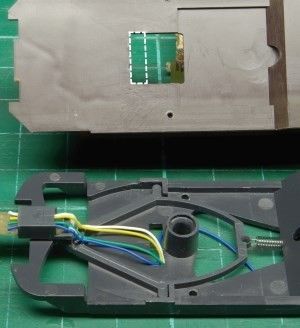 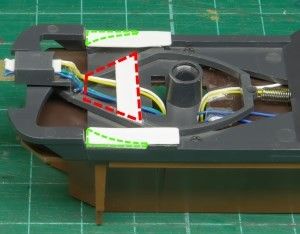 Another 0.25 mm thick Evergreen piece, trapezium-shaped, is glued to the drawbar, to keep the wires away from the bogie. I could have extended this trapezium to the NEM box (red dotted), to avoid gluing the wires at this place.

With these added parts, which will be painted Humbrol No. 32 dark grey, the on-track behaviour is not only improved, it is transfigured! No more problems both in pulling and pushing, neither in turnout grids nor in tight curves (min. radius 500 mm), at all speeds. I remind you that the elongation is much larger than just necessary.

On the fitting, I paint the desk in black, and, on the other side, I glue a piece whose shape is modelled on that of the desk, also painted in black, to fight against the light leaks. In fact, this piece is naturally black, since it comes from a CD case! 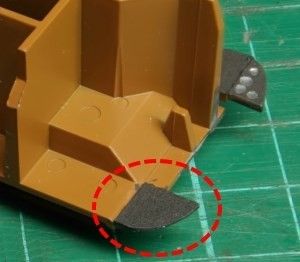 On the chassis, I mill two 1 × 3 mm oblong holes (mortises, in fact) which will receive the lamp circuit board lugs. This PCB is 0.8 mm thick. So, if you can mill at ø 0.8 rather than 1.0, it will be better: maybe with a carbide drill bit? Caution: the milling must be such that the circuit comes close to the chassis recess, because the body (gangway door) is stuck there.

For exact dimensions, see the PDF document about PCBs. 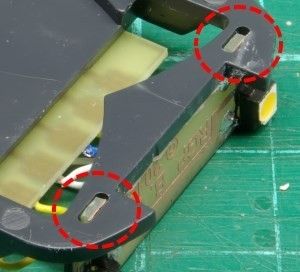