At first, I wanted to make a printed circuit corresponding to the pretty double-roof with its ceiling lights. But it was complicated, because the space is very tight, and you had to do two circuits, one for the compartments and one for the corridor. And it was impossible to place my bistable reed control circuit under the roof; in the toilet, it might be too far from an outside control magnet. So, I resigned myself to removing this double-roof and installing a classic lighting strip.

Note: I make these strips myself, respecting the pitch of the compartments. The consumption per coach is only about 6 mA, for a lighting that I personally find satisfactory. You can download the PDF document showing the diagrams and the etching mask (623 KB) by clicking here.

The bogies are equipped with brass bearings, and have a path for the wires. The current will be taken by the bearings, and, as far as possible, by insulated half-axles, which will give four points of contact per polarity. This system is quite common at Roco’s for example. Some will think it’s a lot of work for little benefit. Not at all! After having realized this installation, I circulated a Nord coach with another classically equipped with pickup strips on the axes, and with the same supply circuit — and the same capacitor. Well, in some places, this last one blinks gleefully while the first one passes without any blinking !

To take the current by the bearings, the wheels must not be isolated from their axle. So, I have to find twice the number of “normal” LSM axles, having an insulated wheel (and the same diameter!), to get their uninsulated wheels back. After checking, I have LSM wagons — with bogies — that do not need lighting, and that will therefore receive axles with two insulated wheels, enough to equip my six Nord coaches.

Small warning: when you remove the axles, some bearings tend to escape, others remain blocked. So, caution for runaways; for recalcitrant, it is possible to separate the external side beam with its axle boxes, which is equipped with small not too fragile pins, to push the recalcitrant bearing out of its housing from the outside.

Note: as the insulation rings are not very much visible in the drawing below, I used false colours for the wheels: the insulated ones are green, the others are bronze-coloured. You may find the following complicated, but it limits the manipulations at their maximum: I only disassemble one wheel out of two, and I only cut one axis out of two. Follow the guide into the wheel workshop… 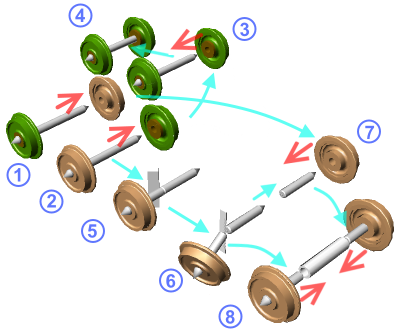 After locating the middle of the axles (those carrying a non-insulated wheel) as precisely as possible, place them into the mandrel of a good drill.

Reassembling the wheels and axles

Here appears a small hitch: the Evergreen tube that I usually use to do this has an outside diameter of 3.2 mm, and it rubs on the brake linkage of the bogie. So, I find thinner tubes coming from ball pen cartridges (not Bic), with an outer diameter of 3 mm, but with an inner diameter of about 2.1 mm, so the axles are not tightened in it. Not good for alignment! To catch the backlash, I stick a layer of tape onto the half-axles, and it fits flawlessly! Obviously, the length of the tubes is calculated to obtain exactly the back-to-back spacing of the wheels: between 14.4 and 14.6 mm according to NEM 310 of 2009. Due to the thickness of the hubs, the sleeve must be 12.8 mm, length which must be in any case adjusted individually.

Before gluing the assembly with cyanoacrylate glue, I check the wheel spacing and the distance between tips (24.7 mm). I also check that there is no electrical contact between the two wheels, which is possible if the half-axes have been cut a bit too long.

I have a total of four axles × six coaches = 24 pieces to prepare. And I do not like repetitive work! This is to say that I spread this work over several days!