Choosing the provider for 3D printing

I have neither the place nor the desire to install a personal 3D printer. For an occasional use, the quality a professional can provide will always be far superior to all that one can get at home, unless you put in a great amount of money, which will never be profitable, by definition.

So I investigated the Internet looking for the ideal provider: not too expensive, but giving acceptable quality for model making. Indeed, there are many offers now, but more for artistic than technical objects, which do not require as much accuracy. Two stand out from the crowd: Shapeways and Drim 3D.

The problem with Drim 3D is that you are immediately put off by “For a quote request and sending us files, click here:”, then “This service is for professionals only. Also available for individuals for large and regular transfers only”. It doesn't make you want to go on…

Corrigendum: in fact, there is an “interface” accessible directly to individuals, but, for some reason, it did not appear on my screen; there was a simple white rectangle. I heard of this by asking them later directly by email, which perhaps I should have done immediately. I got a very friendly and responsive welcome. I even benefited from a detailed commentary and advice on my 3D design quality. I think they would do well to modernize their website, in which browsing is not very intuitive.

So I sign up on Shapeways, then I start: Upload a 3D model, Select file. Here, I’m stuck: I have to choose one file, while I have eleven to print!

Corrigendum: here again, I shouldn’t have stopped so soon. When ordering, as on many websites, a basket opens, into which you can place several objects.

A bit disappointed, I restart an Internet search, and I fall on the German site All3DP. This site aims to provide “all information on 3D printers, 3D scanners and 3D modelling”. In particular, they offer us to compute a quote for a 3D printing (only in English and German). The process is: Upload, compare, order. You send all your files, they are (I think and I hope so) validated, then they offer you a choice of materials with all the useful information, and finally the possible manufacturers (they have six partners: Shapeways, i.materialise, sculpteo, trinckle, Treatstock and FF3DM).

Too good to be true, do you think? I feared it too, but I started though. Creating an account, uploading files, choosing the material then the (only) corresponding manufacturer, Shapeways (!), ordering, paying. Confirmation mail, as everywhere, then… radio silence. I searched on their site for a personal space where to follow-up the order: nothing. If I understand well, the organization is recent and is working on setting up the structure. After a week, I sent a reminder email and I had a quick answer that apologized for the silence and announced the shipment of my order. The delivery occured finally ten days after the order.

Finally, good performance. The big advantage of this site is to be able to estimate the price of your project, even if you want to go elsewhere. I forgot to mention that the shipment is made by the manufacturer himself to your address. I also assume that the files are validated either by All3DP, or by the manufacturer, but I had no comment, and the received parts are consistent with the files sent. The quality of the parts is discussed below.

I see surprising differences within the same parts.

Some, even very small, have both very fine details, for example the window seals of the cab or the slots for windows that I have provided inside, and a surface condition that I describe as lumpy. The sharp angles are particularly affected by a curious phenomenon of “barbules” like feathers seen under a microscope. 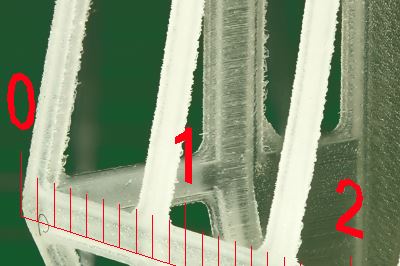 However, things must be put into perspective: this can only be seen very closely. I’ll have nevertheless to deburr all this.

The first thing to remember is that you should avoid sharp angles. If there is a next time, I will try applying systematically a fillet of about 0.1 mm radius.

Second observation, this one expected: the oblique surfaces are very aliased. Expected, but not to this point for a material qualified Fine Detail Plastic. It is therefore necessary to sand these surfaces, which implies avoiding the raised details that will not survive this treatment. Illustration with the leg of the gantry, which I tried to airbrush paint without sanding, just to see… 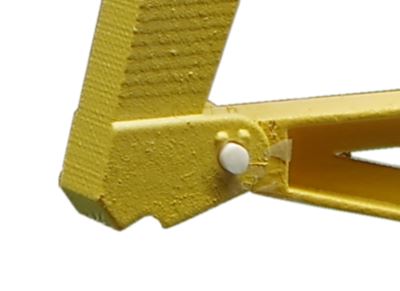 It’s one thing to accept details of a fineness up to 0.3 mm for wall thicknesses and even 0.1 mm for small reliefs, which are actually apparent (here, the small “bolts” have a ø 0.5 mm head), but they will be destroyed if the surface condition can’t be left as it is.

So, the second thing to remember is that it is better to reserve this kind of details to another technique, photo-etching for example, and to keep the surfaces free of small protruding details.

Third observation, more positive this time: the tolerances on part adjustment, whose minimum clearance is given for 0.05 mm, are well respected. For example, the adaptation of the bogies on the gantry foot, that of the cab on its base, or the embedding of the electrical cabinet supporting beams onto the double beams, are almost perfect.

For example, in the latter case, the tenons have a 0.6 mm square section and the mortises are 0.7 mm.

The details are not very visible because of the lack of contrast due to the fact that the parts are translucent: the image stacking software had a hard time… 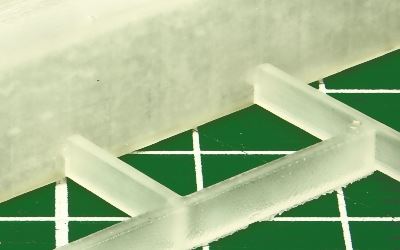 Finally, the curves are generally well rendered, strangely without “stairs steps”. Example here with the rollers of a winch trolley, whose rolling — so to speak — diameter is 3.4 mm. 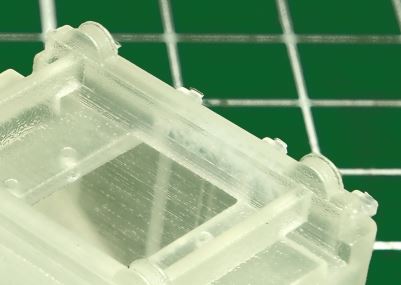 Some members of the Loco-Revue forum say that the surface condition of parts manufactured by Drim 3D is better. This will be to test next time, if there is a next time. 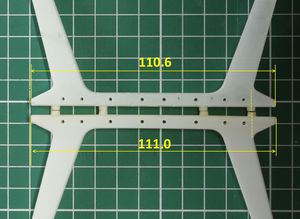 The height is not compliant either: the cab leg misses 0.7 mm, or a relative error of −0.7% (expected height 107.2 mm). On one of the double beams, the longest parts, 0.7 mm is missing (−0.3%). The absolute error is not catastrophic, although greater than that announced on the site (±0.2 mm per 100 mm, i.e. 0.2%); but the trouble is that on the one hand the symmetrical parts are not of the same size, and that on the other hand the relative error is not constant, which would make it impossible to compensate by modifying the scale. 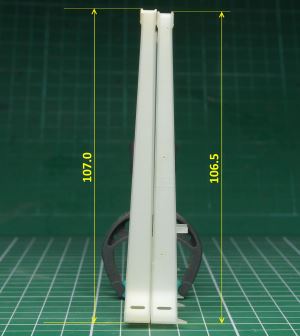 As we have just seen, there is a lot of “cleaning” to do. But, beforehand, it is necessary to rid the surface and the interior of the parts, if they are hollow, of a waxy material which sometimes remains in large quantity, even if the manufacturer indicates that a cleaning was done in factory. Personally, I followed their advice and plunged the parts into a bath of acetone that was effective.

Then comes the sanding, which, as already said, is destructive for the small reliefs, even taking great precautions.

Concerning priming and painting, that are crucial because of the translucency of the parts, the question may be whether they should be done before or after assembly. Before, it is easier to handle, but it is necessary to mask the gluing areas. Another advantage: the primer makes the surface defects more visible, and thus let correct them before assembly.

So, here is the result after sanding, one coat of primer and two of paint (the yellow paint is from Interfer, water acrylic not very easy to apply, the white of the trolleys is Humbrol enamel — all paints being diluted with the corresponding product of the brand and airbrushed).

The test assembly is done with double-sided tape. Despite the small variations of dimensions noted above, the parts fit correctly into each other. 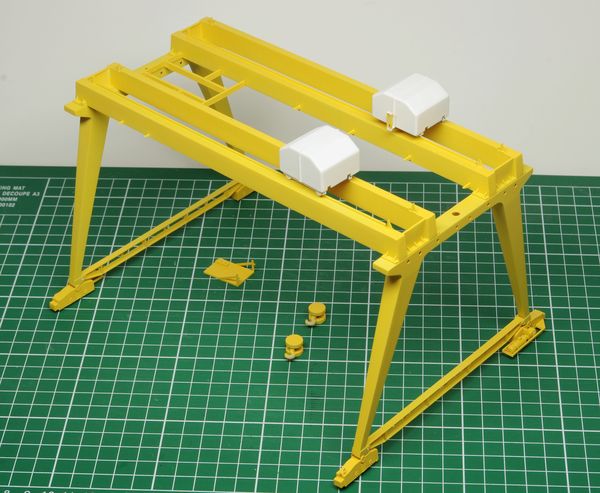 Following a discussion with a member of the Loco-Revue forum, I wanted to test the possibility of gluing the resin, both on itself and with the nickel silver. I was advised the La Colle Pro website. I bought two types of CA glue, one called “universal”, the other for metal, as well as a product, the “primary”, supposed to facilitate the gluing of plastics deemed difficult, such as polypropylene (PP) or polyethylene (PE).

The tests were made on waste parts, which were remade for free due to nonconformity. In the following picture, the marks correspond to gluing with different combinations.

The figures correspond to gluing of nickel silver pieces in the mortises provided for a gangway in the resin beam:

The letters correspond to gluing of double beams on legs: 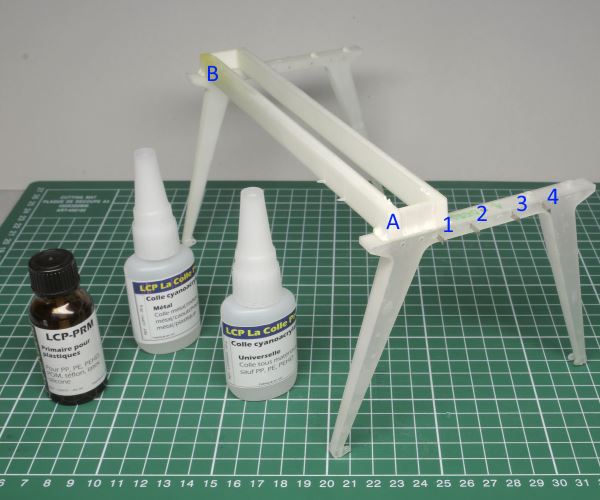 I didn’t do a destructive test! But the results are as follows: the nickel silver pieces are resistant to pulling out (with moderate traction), but they have vertical clearance. This is mainly due to the low mortise depth, which will be corrected. By adding an extra drop of glue, with the same process, the piece glued with universal CA, without primer, holds best.

As for gluing resin on itself, here also the universal CA without primer holds best. I think that if I had forced more, the resin would have broken first.

To be continued… here.

I learned later that, if the prices are displayed, it means that an automatic validation has been made at the manufacturer. But it is possible that a manual file check implies a change in costs, in which case the customer is notified and questioned about his intentions.