Drawing of the spreader

The spreader is that huge frame used to grab the container. It is equipped with gripping devices (corner locks or arms) which can slide to fit the various lengths of the containers.

This document shows a recent example, different from the one that interests me, but which explains well the rotating locks gripping system (twist locks). This mechanism is similar to that of a key in a lock. Here is a view of this kind of lock, with, underneath, a standardized ISO corner piece for container.

The landing pin is in fact a probe operated by the container when the lock penetrates into the corner piece, thus signalling the correct positioning of the spreader and allowing rotation of the lock.

Here at least it’s simple: I have no diagram nor plan whatsoever. I can only rely on the pictures, with the gantry and containers whose dimensions are well-known. At the time (early 1970s), there was less variety than now. The ISO containers were all eight feet wide and high, i.e. 2.44 m. The lengths were 20, 30 and 40 feet, respectively 6.06 m, 9.12 m and 12.19 m. Since then, the 30 feet have almost disappeared.

The spreader consists mainly of a frame made of IPE beams, joined together by bended sheet iron plates at the ends, and by cross-pieces of rather complex shapes, designed to receive the hoist hooks.

Here is a first photo of which I straightened the perspective to measure the frame length and beams height. The question of the container length appeared immediately. Indeed, it seems too long for a 30 feet, and too short for a 40 feet, compared to the spreader frame that is clearly longer. And, in fact, neither is compatible with the gantry legs spreading (about 11 m).

The solution came by consulting the Wikipedia article on multimodal containers, which states that at Sea-Land, whose boss Malcolm McLean was the inventor of the concept, the containers were 35 feet long, or about 10.7 m. This is undoubtedly the case of the container photographed here!

On the image, the first number is the value in pixels (taken from a larger image, inapplicable to this reduced image). The second is the value in millimetres. Naturally, all these dimensions are subject to considerable uncertainty, and the calculation basis is different according to whether one measures in horizontal or vertical. There would be equality only in the case of a perfectly orthogonal projection, which is hardly ever the case. The passage from pixels to millimetres was made by comparison with the container.

The spreader length, obtained by symmetry because of the hidden end, is 12.34 m, perfectly coherent with a container of 40 feet (12.19 m).

Concerning the beam height, the standard values compatible with the measurement are 450 (× 180) or 500 (× 200). I arbitrarily chose the second, choice confirmed below. Obviously, the beams might not be standard!

Here is now the picture used to get the spreader width. It will be noted that the beam height, measured here as well, is consistent with the value found previously.

The width is taken from the middle of the beams. If they have a wing width of 200, the total width will be 2.025 m, which I have arbitrarily rounded to 2 m.

Thanks to these dimensions, I can already outline the structure of the spreader. But the hardest remains to be done! 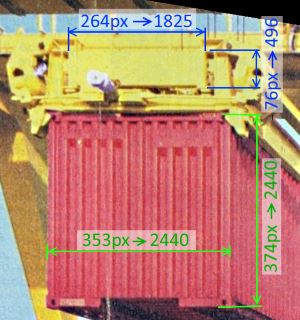 Let’s look at the lifting cross-pieces now. The method used is still the same. From the spreader width and the beam height dimensions, as noted above, an attempt is made to deduce the others. The diameter of the pulley block (also uncertain) is taken as a check.

This picture shows the presence of a smaller beam in the axis, which probably serves to support and guide mobile sets. It has a much smaller section, and must pass under the cross-pieces. I chose a 180 mm HEB beam. 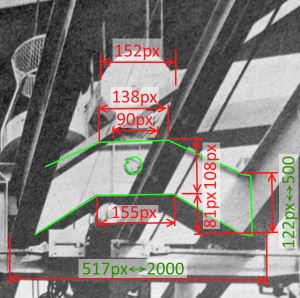 There are also bracing profiles, which I have taken of rectangular 90 × 50 section, their actual profile being an angle either in L or in T.

Nothing special to say about the drawing, except that it is made separately from the gantry crane and imported as an external reference. This means that it is only included as an address, and that any changes to this external reference will automatically affect the drawing of the gantry. The other method, block import, would require deleting this block and re-importing it at each change. On the other hand, you cannot work on both drawings at the same time. You are obliged to close one during editing the other. Another disadvantage is that you cannot move the files to a different folder, otherwise you will lose the path — but it will be possible to declare the new path. This requires care in the project management.

Same technique for the container visible on the image at the bottom of the page.

Here is the current state of the spreader. It still lacks an evocation of the gripping devices (corner pieces locks) and, for the moment, it is still impossible to lift a container… 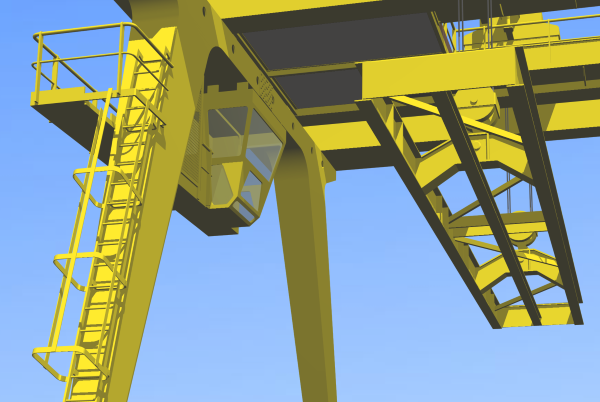 These are apparently cast steel parts. The locks will only be evoked, and, for the moment, I skip the semi-trailer gripping arms, too complex parts. Some spreaders were not equipped anyway. 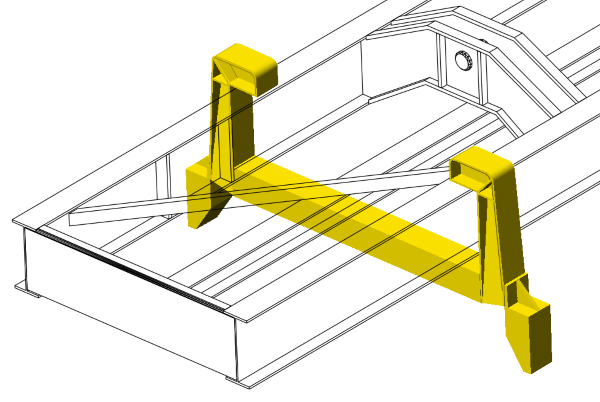 And, for the first time, a container can take off… 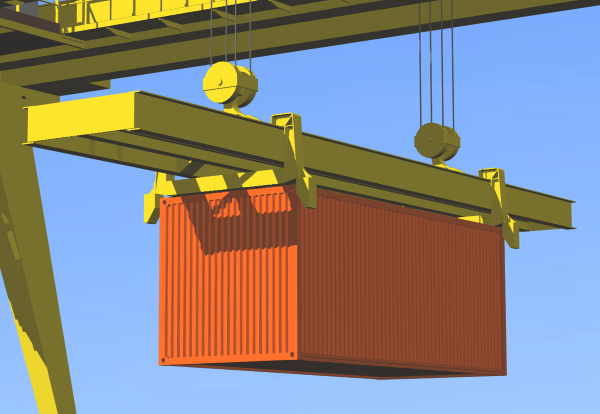 Here is a comparison with the first photo of this article. At least in general proportions, all seems coherent (even the shadows!).