Drawing of the gantry crane

For vector drawing, I use AutoCAD 2000, an antiquity of the last century. I am used to it, and my drawing needs would not justify a heavy investment in a recent version. I know there are free drawing software, but I also don’t want to invest in additional learning. Productivity first!

But this AutoCAD version, not very adapted to Windows 7, hangs sometimes in 3D, especially when doing photo rendering: so it is necessary to often save the work in progress.

I will describe, without going into details, the successive steps to build the 3D model. The final goal would be to come up with an actual model, but I’m not there yet; I will content myself with trying to finalize the drawing, which is not so simple.

However, it is better to keep in mind the technique(s) that can be used to make a real model, as they can affect how to draw. For example, if the making is carried out with brass or nickel silver sheets, the thickness of these sheets must be taken into account for bending. On the other hand, if 3D printing is used, the objects can be drawn solid; the “slicing” software being responsible for the interpretation, full or hollow, of parts of a certain thickness. A priori, I start on the hypothesis of a fabrication close to the original, so in sheet metal. It will always be easier to get a full part from a hollow one than the opposite.

Each drawing step will correspond to a coherent subset, which will be drawn on its own layer. This makes it possible to hide objects that could hide others, and thus facilitates operations. Most elementary objects can be created using two methods: extrusion and revolution. The simple shapes are then associated by union or subtraction if it is necessary to drill holes for example. But these operations should not be done too soon, because the changes inside a 3D object are more complicated, sometimes even impossible to perform.

I chose the actual scale for drawing. This choice is not very important, as it will always be possible to apply a different scale factor at the end of the work. But it avoids multiple measurement conversions that are always painful and may cause errors. Bearing in mind, as we have seen above, the making with 0.3 mm brass or nickel silver sheets, most of the boxes will be in this thickness at 1:87, which corresponds to 26 mm at the 1:1 scale, without knowing the actual thickness of the sheets.

The shape of the bogie chassis is quite simple. The axes: wheels, motor shaft, piece carrying the leg, must be clearly identified. I plan immediately the protective angles at each end, which play the role of a bumper to throw the obstacles out of the track.

For the time being, the security organs are not represented. Those details will be added later. 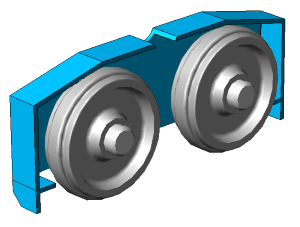 The above bogie is trailing. For the driving bogie, I miss a lot of information about the aspect of the transmission. I only know that the assembly of brake, motor, and transmission is parallel to the bogie frame, and that there is almost necessarily a bevel gear to attack the wheel pinions. In this picture can be seen a kind of banjo that evokes this bevel gear. 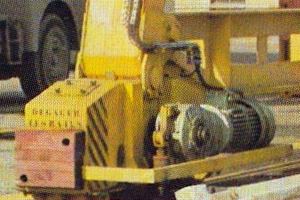 The driving motors —those of bogies— are wound type asynchronous motors with brake. The speed variation is obtained by a rheostat inserted into the rotor circuit. A system called electric shaft allows to synchronize the advance of the two legs of the gantry. 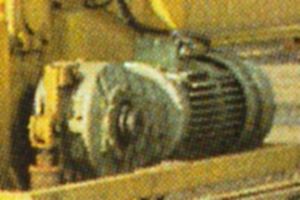 Note: I don’t know if I use the correct technical term. For me, this beam is the openwork beam that connects the two legs of the same side. This part is rather easy to draw. It consists essentially of two tee profiles connected by spacers. 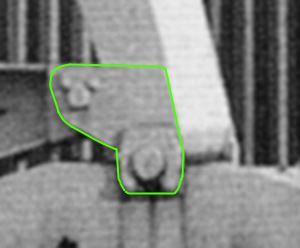 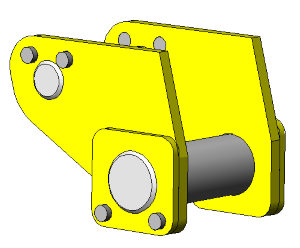 Association of the three previous pieces

Aspect of the assembly with the leg that we’ll see below. 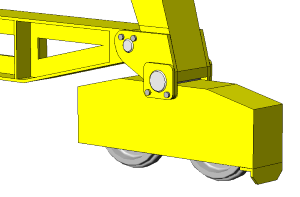 What I call leg consists of two inclined beams connected at the top by a cross-piece. These parts are made of welded steel boxes. Contrary to what one might think, the legs are the most difficult pieces to model.

I also modelled the central connector (circled) which is in fact very visible on all the photos. There is one on each side of the cross-piece, and perhaps also on the bottom.

Two horizontal double beams, the girders, constitute the bearing support for the trolleys, which themselves contain the lifting hoists.

They are rather complex pieces, with their fixing feet, their walking platforms and their guardrails, but not very difficult to draw. I oversized a little the flange ribs. The walking platforms are made of anti-slip embossed sheet metal, but I did not represent this detail.

Here is the current global aspect of the modelling.

The next step will be dedicated to the driver’s cab with its access ladders. 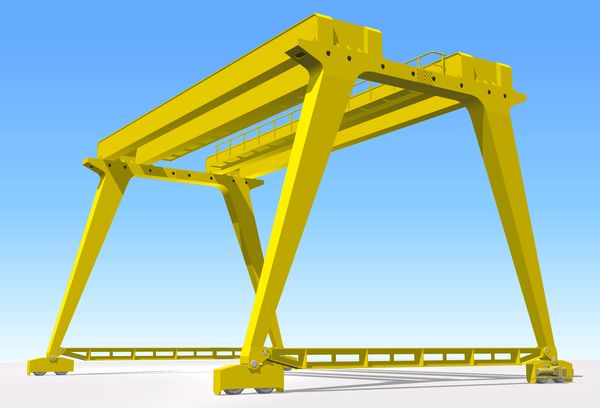 The first problem is the installation:
the ACAD2000 installer is 16-bit, which is
denied by Windows 64-bit (Vista and higher).
Fortunately, here is how to cope.

Consider configuring the automatic backup interval,
for example every 5 minutes. The drawing is then
saved to a file located in the folder:
username/AppData/Local/Temp/filename.sv$.