In the late 1960s, at the rising of ISO container transport, SNCF installed a number of transcontainer (according to the terminology of the time) terminals, and consequently an even greater number of container gantry cranes. Mostly manufactured by the unrecognised firm Joseph Paris, which still exists, within the Fayat group. 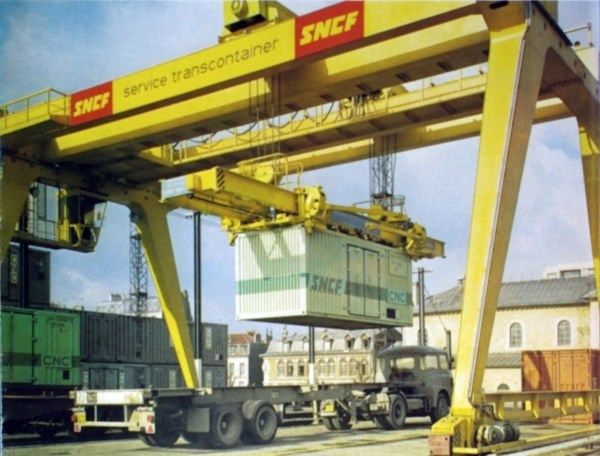 I’ve been considering for a long time modelling a container gantry crane at 1:87 scale. I had pictures (personal and from La Vie du Rail magazine), but no diagram, indispensable for not making coarse error on the dimensions.

Note: if I ever get to the construction, I don’t intend to make this apparatus functional. It would enormously complicate the design, for a result that is likely to be disappointing. Physical laws don’t reduce to 1:87. For example, on all the motorized model cranes that I saw, the load balances ridiculously quickly at the end of the cable. Nothing can be done: it’s the pendulum law, whose oscillation frequency is inversely proportional to the square root of the length. Whatever the suspended mass (within a certain limit), the frequency will be √87 ≈ 9.3 times greater in HO! A majestic sway in reality will result in a fish wriggling at the end of the rod…

On the advice of a Loco-Revue Forum member, I bought No.207 of Voies ferrées magazine, which deals with the history of Novatrans (société nouvelle d’exploitation de transports combinés). It includes the diagram of a Joseph Paris gantry crane, as well as two photos that allowed me to specify certain details. There have been two generations of these gantries; in the first (beginning in 1968), two “sizes” of gantries existed, i.e. 7.4 m and 9.8 m high under girders and of a lifting force of 42 t (two hoists of 21 t); in the second, from 1970, 10.2 m high and force of 50 t (2 × 25 t). This diagram concerns the second generation, while the photos on this page, except for the last one, show gantries of 9.8 m. In fact, as there is only a slight difference in height between these two types, and as they have a common range (“width”) of 18 m, I will base my design on the same diagram for both. This will only represent a small trick of 4.6 mm on the 1:87 scale height and will represent the two generations, which, visually, differ only in details, as will be seen below.

The diagram is shown in low resolution, as usual, not to contravene copyrights. 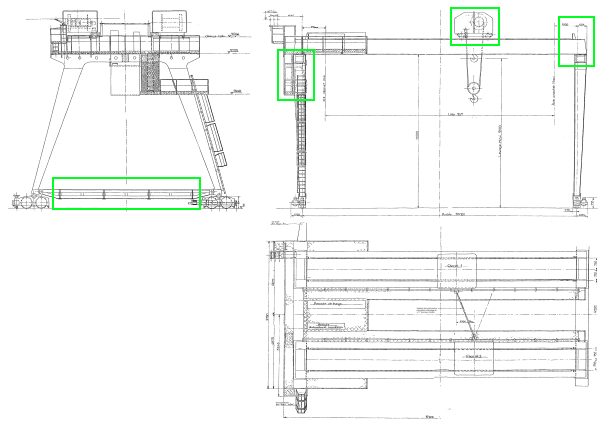 On the scan that I made in large format, I adapted the resolution to be able to make measurements directly in centimetres at 1:1 scale — my bitmap drawing software (Paint.net) doesn’t allow measuring in millimetres. I had to slightly change the width / height ratio to get the same scale in both dimensions. Despite this, the dimensions are not always accurate, which is not surprising for an overall drawing.

There are differences of shape between the two generations, for example the connecting bars of the legs, with four reinforcements instead of five, the upper beams, with the ends inclined instead of being cut, cab and trolleys (see boxes).

Gantry crane under construction in Dunkirk harbour (personal collection). This document allows you to see details that are hidden when the apparatus is in working order. See also in Photos of railway equipment. 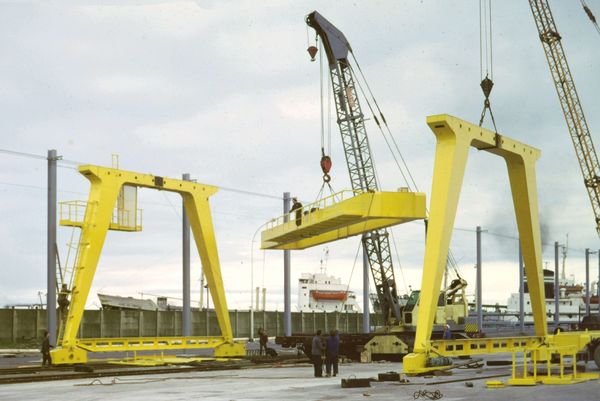 The right leg is held upright by a crane. The left one is attached on one side to a mast of the three-phase supply line, and on the other to the ground by a stay. 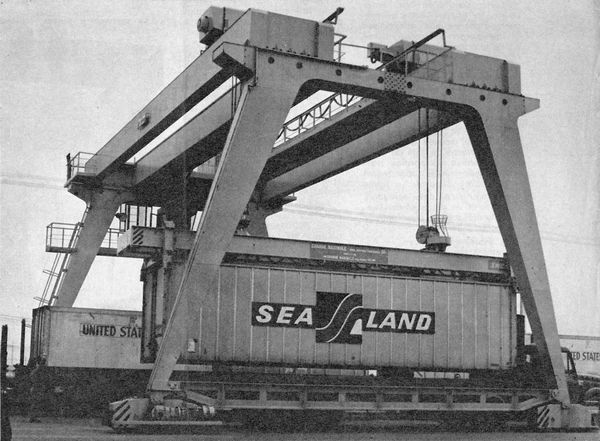 Gantry of Maisons-Alfort (10.2 m) handling a semi-trailer, by means of grippers. 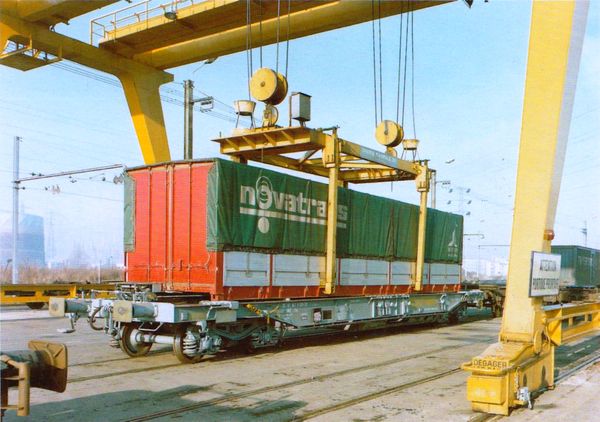 This last picture shows details of a bogie, with its safety devices, passive or active (limit switch).

Still, this company is gaining to be known given its grandiose achievements in the field of metal construction.
See this company’s website

For information, on my scan, the corresponding resolution is six pixels per inch.