The beams, lateral as central, are composed, like any self-respecting beam, of a web and two flanges, whose assembly, and especially the squaring, are not necessarily easy, although there are positioning grooves. So I planned mounting templates which, at first glance, could not work, because they were over-etched and gave too much clearance. However, by positioning them obliquely, they played their role perfectly.

Here is a side beam engaged in the templates, which allows to hold it in the vice and solder the three parts at once. 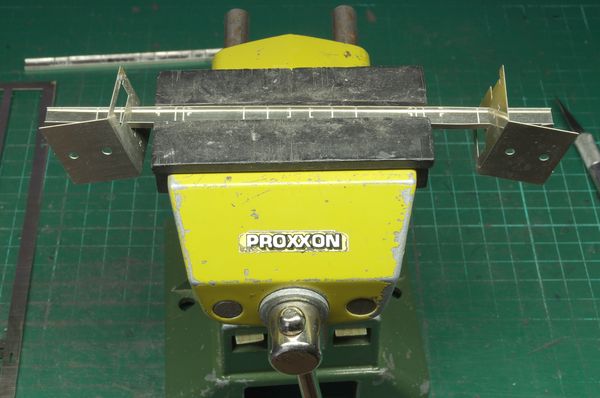 Naturally, the ends are not soldered, lest the templates are. But it’s easy to do it next, since the three parts hold together.

For the small central beams, I also use the templates, but these beams are too small to be put into the vice. So I left them in the templates, themselves fixed on a board. By pinching the middle with tweezers, I maintain contact between the elements while I move the soldering iron. 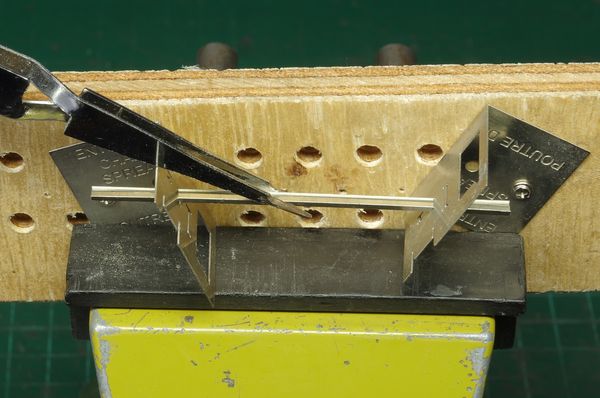 These crosspieces will receive the winch hooks. They are double, with a common lower flange. So I start by soldering a web and its upper flange… 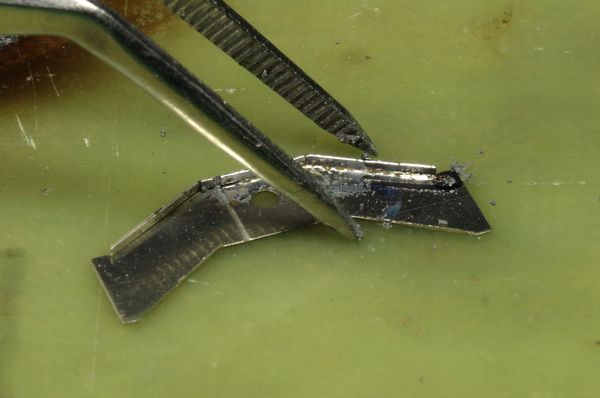 … then the two halves together, by interposing a 2 mm aluminium wedge, the whole being assembled by an M1.6 bolt. In the photo, the tweezers hold the lower flange pressed against the webs before soldering. 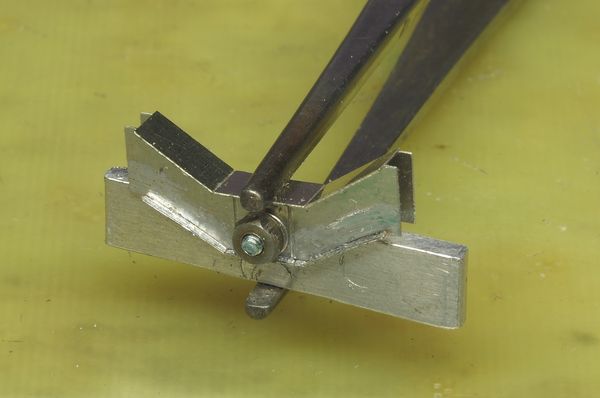 Finally, the hook axle, diameter 1.5 mm, is soldered, taking care not to put any solder in the central part. 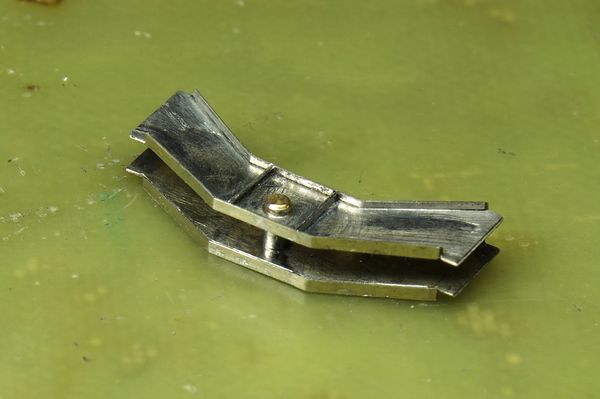 I solder the two lifting crosspieces at their location on a side beam, still checking the perpendicularity… 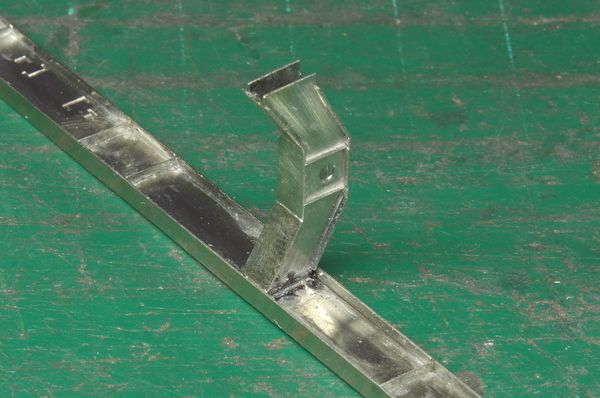 … Then two central crosspieces and the second lateral beam, carefully checking the squareness and flatness of the assembly (the sooner we find a defect, the easier it is to correct, even if, with the soldering technique, we can always take everything apart and start over. This happened to me). 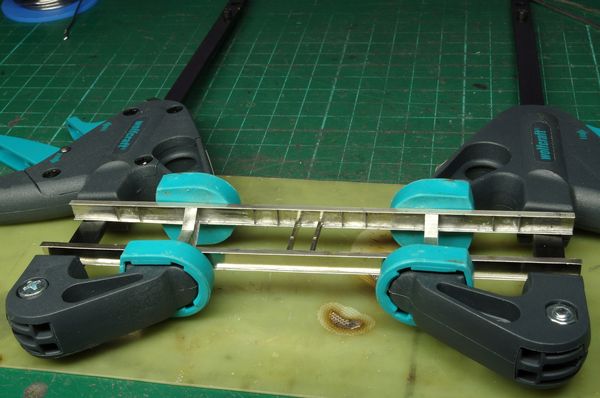 Once this chassis is assembled, the rest of the parts will not pose too many difficulties, except perhaps the small bracing angles installed obliquely, difficult to hold in place.

Subsequently, soldering of the end crosspieces… 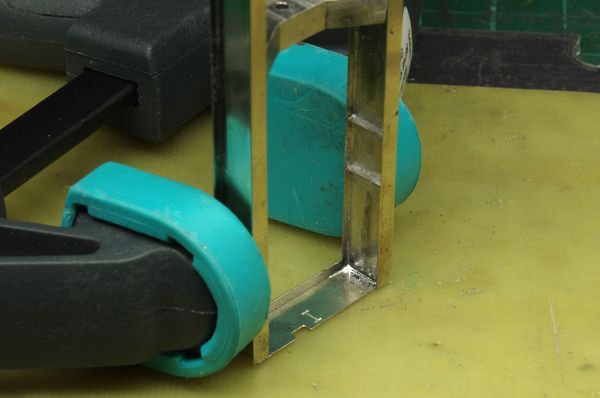 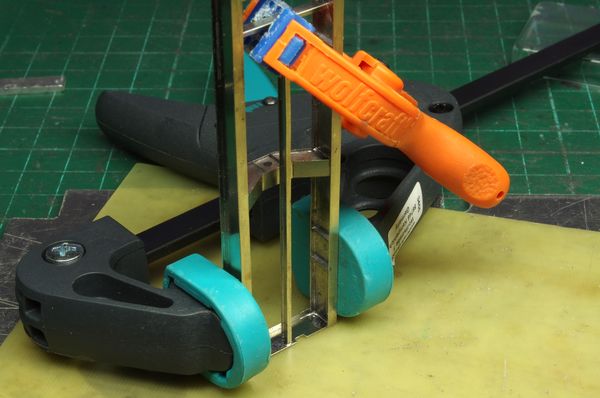 … on the central crosspieces… 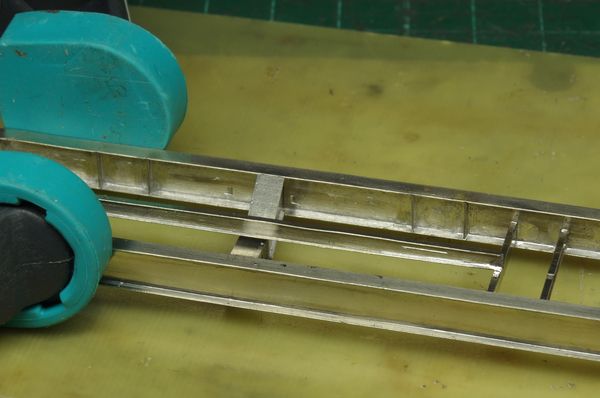 … and finally soldering the bracing angles. 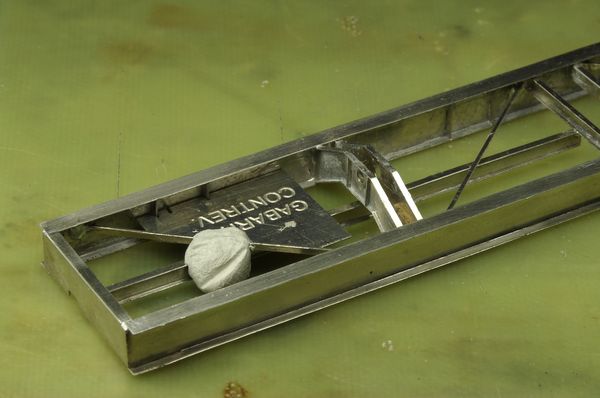 For the latter, I think it would have been easier to mount them before the central beams.

Let’s finish with the accessories, among which I can make out the cable baskets, kind of funnels guiding the electric cables when the spreader is raised or lowered.

The main part of these baskets must be formed into a cylinder, which I obtain as already explained by rolling it on a drill bit. It is more delicate here because there are fragile uprights to protect. The cylinder is soldered… 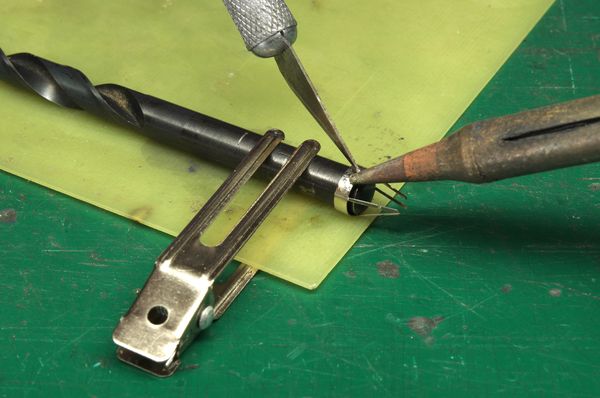 … then the bottom and the supports. 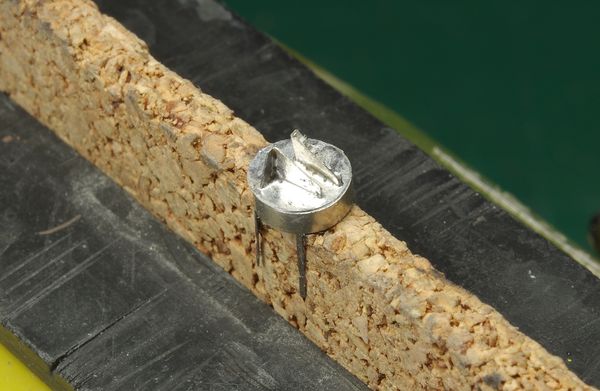 In the future version, the supports, which are difficult to align, will be integrated to the lifting crosspieces.

Soldering of the middle circle. The basket is supported on a conical mandrel, which pushes the uprights against the circle… 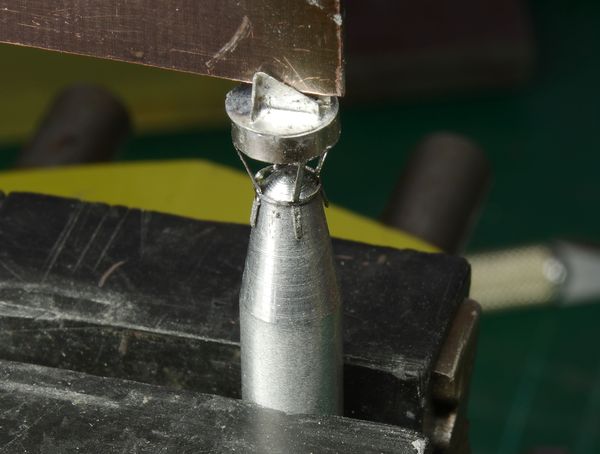 … And finally of the upper circle. 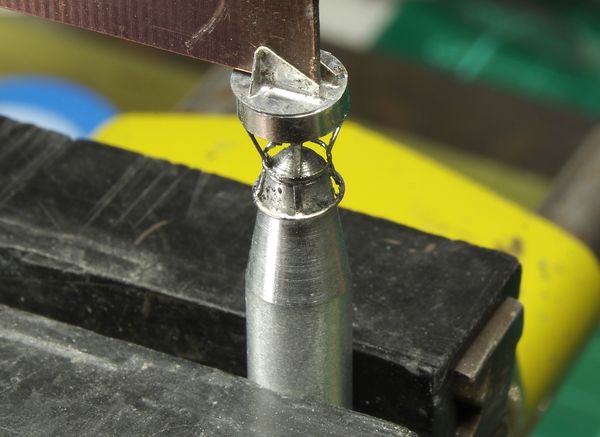 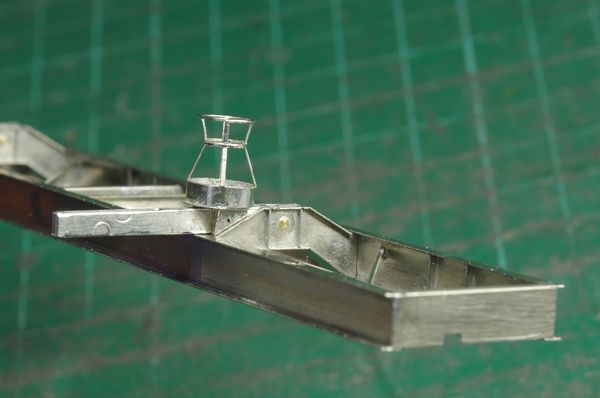 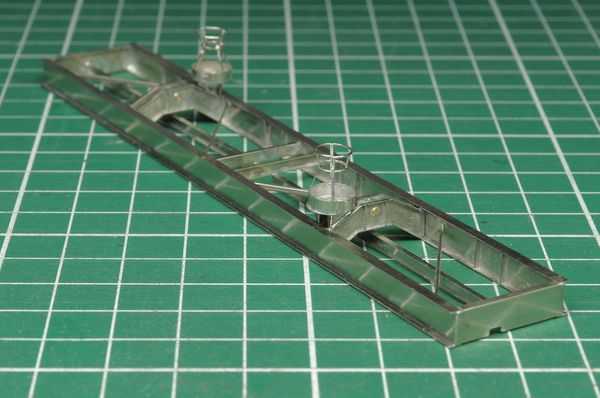 The metal part of the spreader is now finished. It remains to equip it with the gripping carts, which are mainly composed of parts in 3D printing.