The assembly of the footwalks is very similar for all. Therefore, I’ll only describe it for a girder footwalk. It consists in soldering the supports, either in the form of an angle or U steel beam, then the railings. This last operation should be done preferably at the end of the complete assembly, because on the one hand the railings can hinder the decoration of the gantry, and on the other hand, these parts are quite exposed and fragile.

The assembly of the supports does not pose any particular difficulty, because they are positioned in engravings under the platforms. Here, a support is held by tweezers for verticality. In addition, I press it with an X-Acto blunt blade to ensure good contact. A very small soldering bit is used, always of course with flux. 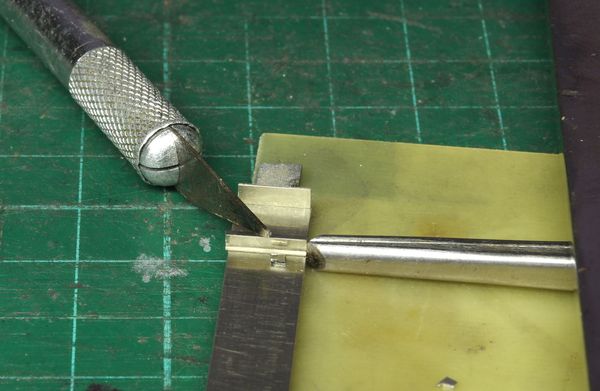 Once this is done, we must check that the footwalk fits correctly into the main part. Sometimes there are surprises. Thus, for this girder, mortises have not been sufficiently engraved and are half blocked. I had to repair these holes in a slightly acrobatic way! 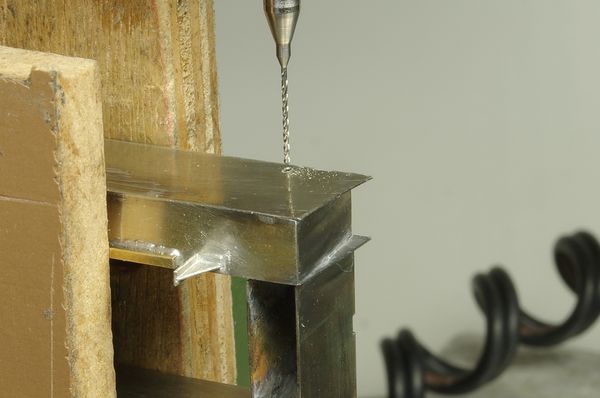 This done, the footwalk is perfectly assembled and can be soldered into its place. Top view: 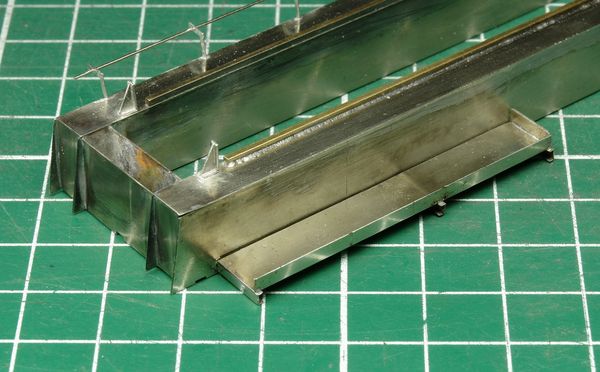 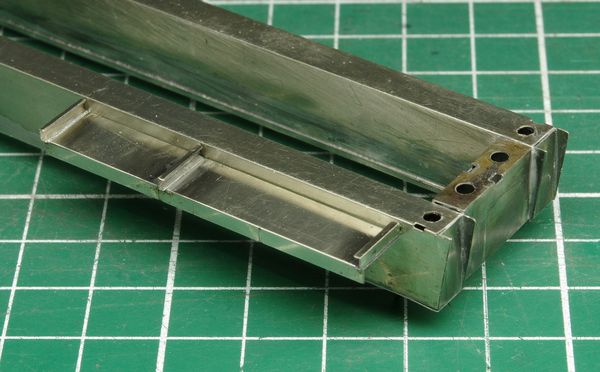 This one is special enough to deserve a paragraph.

Regarding the supports, no significant difference with what was said before. But there are many accessories there requiring some clarification. First, the ladder that provides access to the upper footwalks. To facilitate assembly, I have designed temporary crosspieces which keep the two uprights perfectly parallel. This allows a few bars to be soldered comfortably, before removing the crosspieces and then mounting the remaining bars. On the following photo, a crosspiece is already deleted, the other is cut. 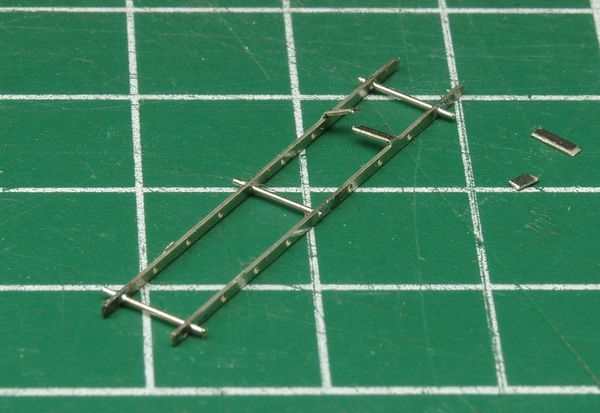 This ladder is then soldered to the platform, as well as the supports of the latter. 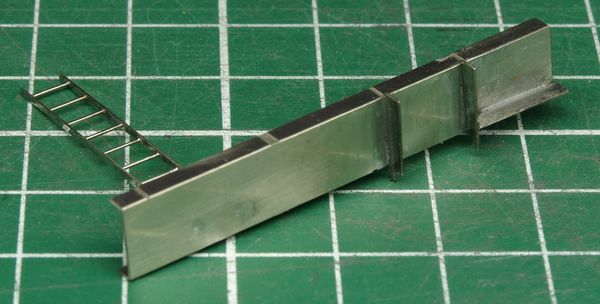 In reality, using this ladder presents a danger, which explains the presence of safety fences on both sides. I tried to get these fences directly etched on the parts, but they did not come out correctly. In fact, the width of the “wires” was less than the minimum accepted by the engraver. Knowing that, I also planned parts without a grid. So I had to add it. All this being quite fragile, I soldered the grids directly onto the photo-etched plate, before extracting the parts.

The grid used is from Scale Scenics. I put soldering cream on the frame, I hold the grid in place on the photo-etched plate with a piece of epoxy, then I apply the soldering iron from point to point, without rubbing for fear of deforming the grid. 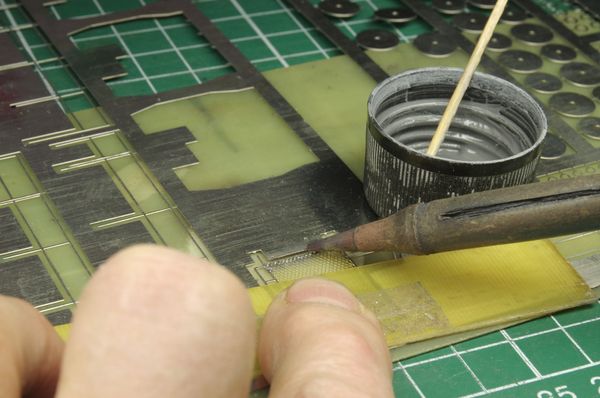 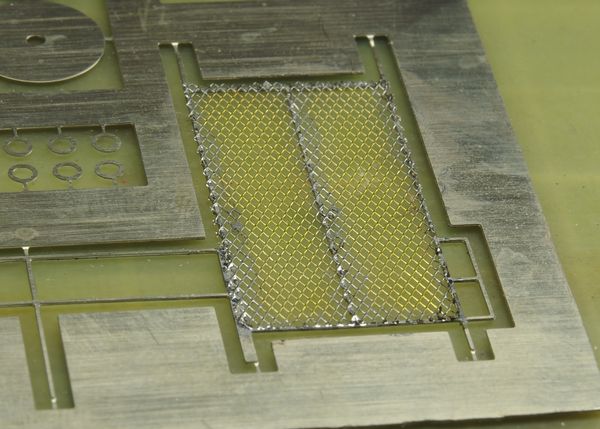 Soldering the railings on the platform

For this footwalk, unlike the others, I fit the different railings on the platform at once. First the outside railing, holding it on a cork board using two tweezers. 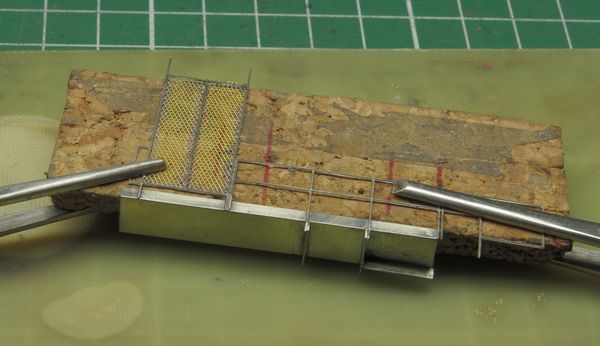 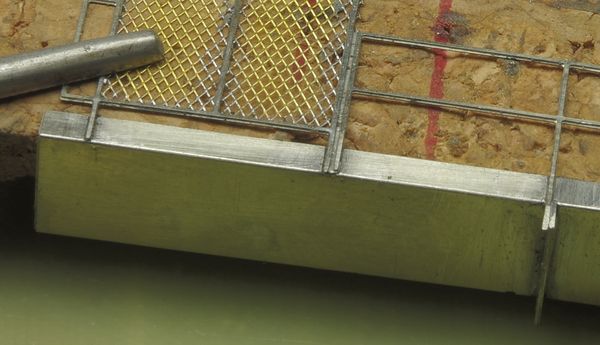 Then the inside railing, also fitted with a safety fence. 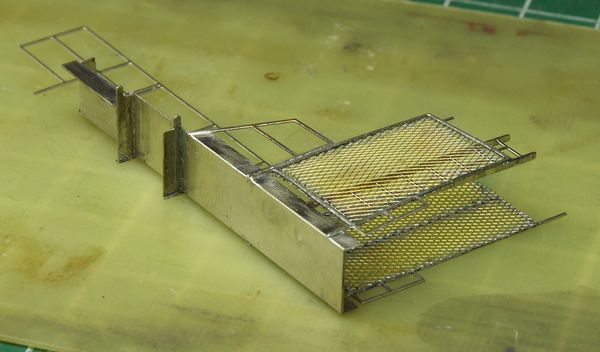 Let’s then check the assembly on the gantry leg. 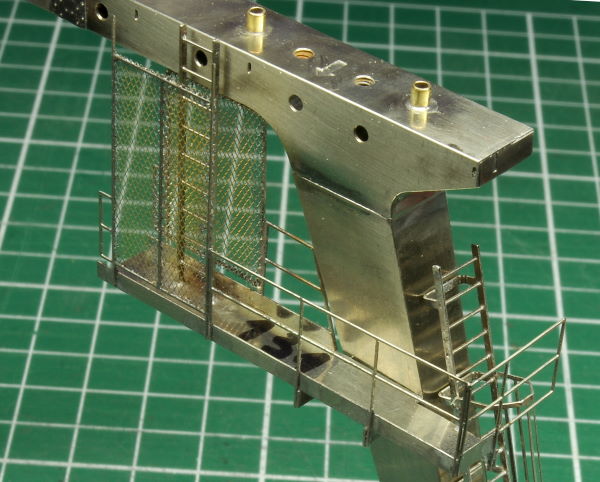 Everything is fine. The inside grid fits under the end girder; the outside grid will be soldered to the upper footwalk when it is assembled. We can see in this photo the access ladder that we are about to talk now.

First, bending the ladder. I planned several engraving lines to obtain the approximation of a curve by three segments for the supports. The first side is bent. Note the blocked hole on the left, and the following holes badly opened. I did not realize it until after, otherwise, I would have corrected on the flat part, it would have been easier. I had to systematically resume all the holes (67 in all…) with a cutting gauge. 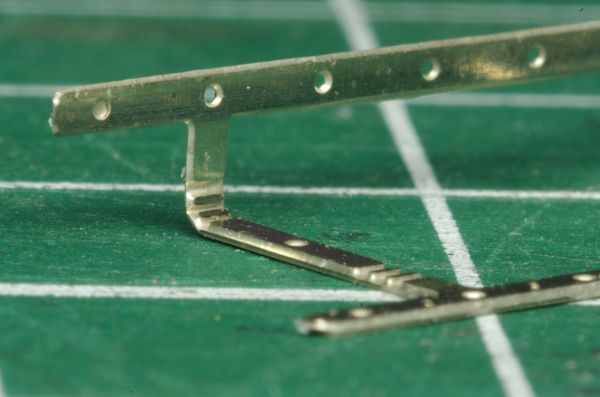 I hoped to be able to solder all the bars at once, but that turned out to be impossible: there were always one to come out at the slightest vibration, like here the second on the left… 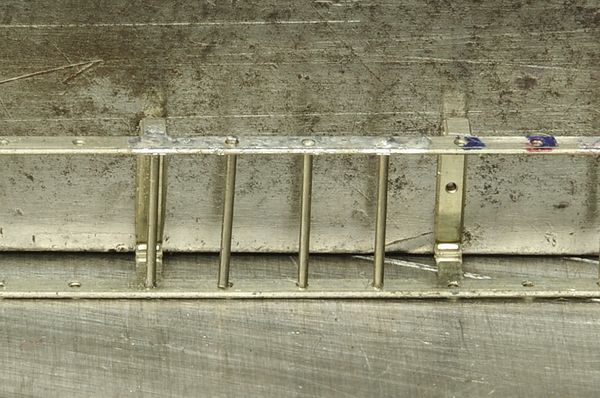 I also hoped to use bars of the right length to avoid a risky levelling work given the smallness and the weakness of this ladder. It turned out to be very difficult. Finally, it is better to cut them a little too long, and then cut them off, provided you have an actual flush cutting pliers, to minimize the use of file and abrasive paper. 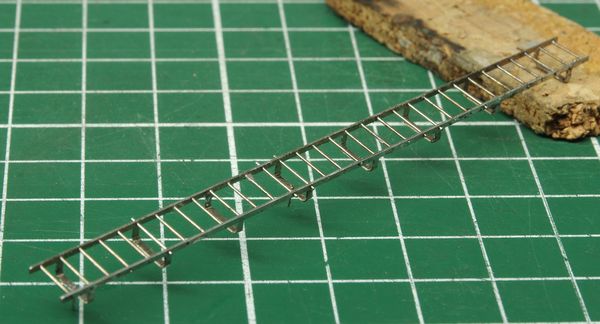 Notice the longer bars which will be used to fix the safety cage, which we will now put in shape. After bending, the angles are immediately reinforced with solder, because these parts are very thin and fragile. 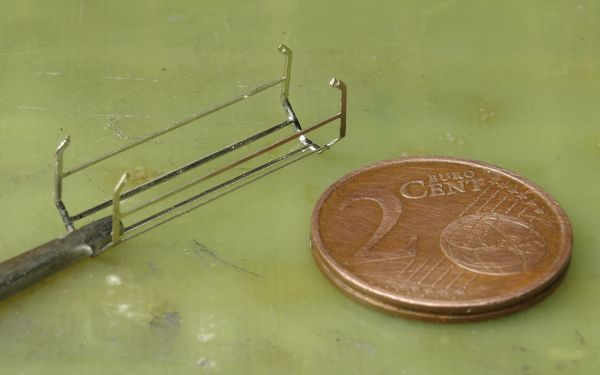 Detail of the mounted cage.

Among the accessories that will be mounted on the cab leg set, there are also precisely the cab supports, and the console that supports the power trolley poles. Here are some pictures of these accessories.

Cab mounting test on its supports. These, because of their small size, are difficult to set up. It is therefore necessary to check that the cab fits correctly. 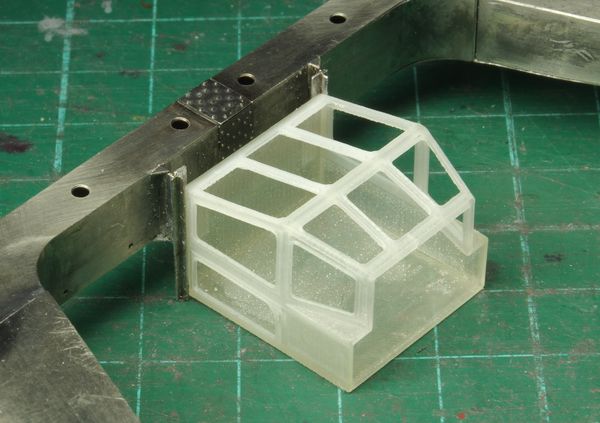 Here is the console of the trolley poles. I tried to make springs (tiny: diameter 1 mm, length 4.5 mm) with 0.1 mm stainless steel wire. The result is very disappointing. 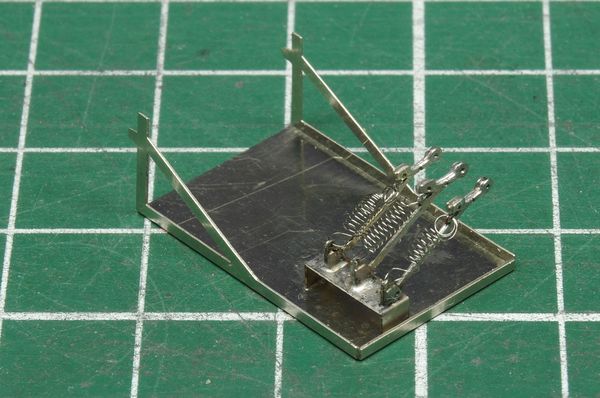 Fortunately, a kind member of the Loco-Revue forum (thanks to him) provided me with much nicer springs, but not commercially available, since they come from Symoba couplings. But these springs are actually barely visible, so we can do without them. 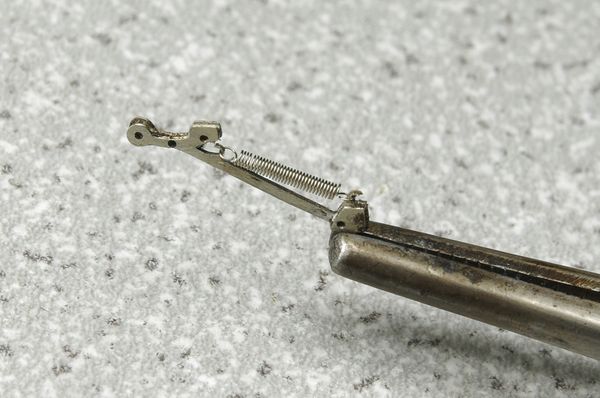 Here is finally this leg set equipped with all its accessories. 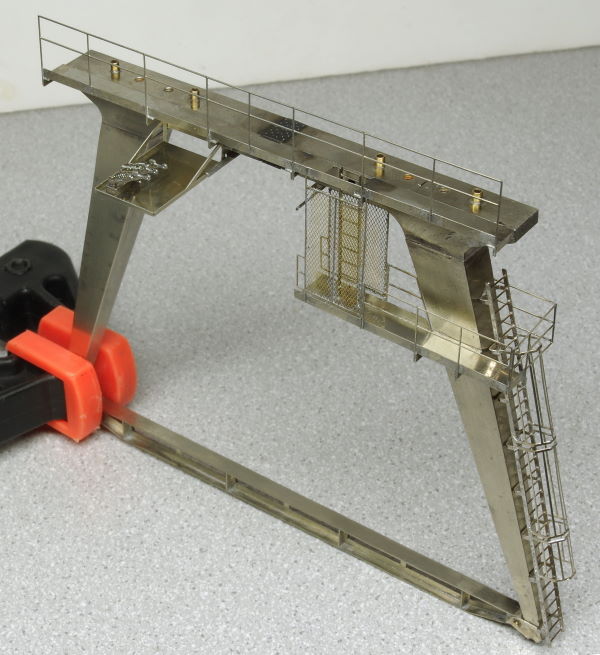 This platform combines all that has been seen previously, bending, soldering of cabinets and railings. The beams supporting the platform form a unique part in 3D printing, which is not a good idea, since this part will be embedded in and covered by metal parts. It thus risks being subjected to too strong constraints. In the future version, these beams will be metallic. 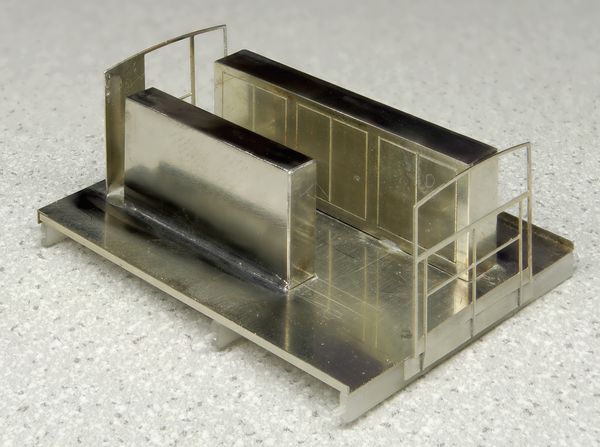 The roof, in 3D printing, will only be assembled after painting the cabinets.