Here, we will talk about slicing a body into pieces, then stitching them together, much like the Frankenstein monster… I mean, Gotlib’s.

But I must also say that most of the models of the sixties and seventies were not to scale. Often too short, sometimes too long, too wide, not proportioned, etc. I could not bear it.

One example among others: the UIC Jouef coaches could have been correct. But why have they shortened them by so little, about 1 cm? What purpose? At least, the wild shortenings of the German manufacturers were explained by the need to circulate on very small radii. But 1 cm? On the other hand, to use the same bogies on all their products it seems, they had also decreased the cantilever, which gave a totally distorted silhouette. Let’s not talk about the roof too high, or the mouldings in relief to make the painting easier, and intercirculations completely fanciful. So, dreamed preys for the new Frankenstein, I named: myself!

Abstract of Gotlib’s The Bride of Frankenstein.

So, I had to cut, shift, drill, scalp, tap, and so on. Among the poor victims which went under the knife: Lima BB 17009, Jouef Picasso (railcar), Gril-Express (self-service dining car), one or two UIC, and I forget some, only the Hornby C 61000 shunter got over. Others escaped torture for lack of time. To make cut-outs of constant and precise width, I used to look for plates of suitable thickness and I transformed them into saw blades. Here are some plans of operations planned and carried out, or not.

This one was sliced like a dry sausage: it was necessary to reduce its length while respecting a constant spacing between the grids. Not simple! Operated, accessories rebuilt: pantos, buffers, cabin windows, handles, etc., it only waited for a re-painting. But the too cumbersome motor did not allow the height reduced body to get its place correctly again…

Here again, red is not epochal. And there is a misplaced dimension. This one escaped the executioner concerning the body; but its bogies were rebuilt from Jouef bogies. It would have been also necessary to remake the front faces rather failed. The cumbersome Lima motor would still have been a problem. This machine was nevertheless superior to the Jouef, by its correct length and its engraving sharpness. Think that Trix made again too wide a model in the late 2000s … 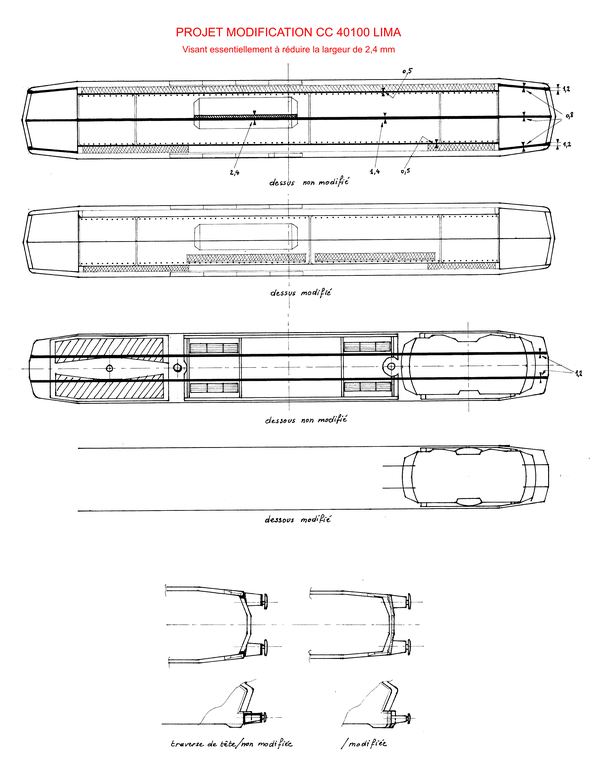