I always loved to draw, and I must say without boasting that I was a little more gifted than the average — it’s family, besides — both in art and technical drawing. I did not become an artist because I had no imagination! Copying, no problem; afterwards, no one left. I hardly exaggerate!

As I liked trains, I don’t tell you how many I drew. And how many projects. Remained at the state of plans, like castles in the air.

Here are a few examples. You can see the drawing in larger size by clicking the image.

The BB 9200 was my first electric model locomotive, from the Jouef Sud-Express, in 12 V, with the brass gears sounding almost like the real ones, and whose motor emitted a sublime ozone smell! As for the 67000, it had caught my eye on the sheet that La Vie du Rail published on the occasion of a railway exhibition in Paris Montparnasse Station. 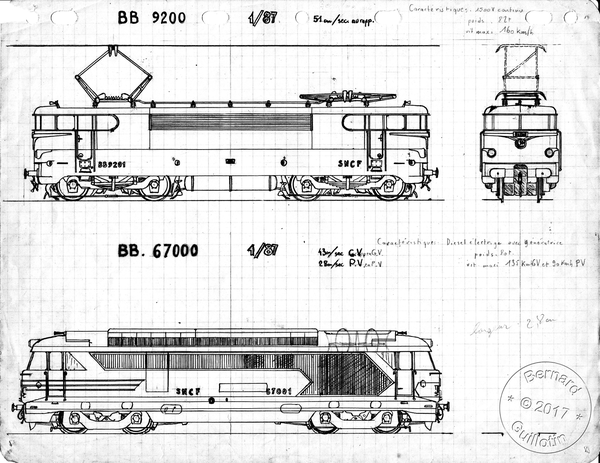 The BB 16000 combined the advantages: it was very similar to the 9200, and I could see it often, either at Ronchin level crossing on the way to school, or when we took the train to Paris. When it was heading the “telephone” stainless steel fast train, it was so stylish.

Well, this train, I took it once! Yes, between Douai and Lille, back from my “trois jours” of military tests in the barracks of Cambrai. To avoid missing schooldays, the Lycée had enrolled all of us on the Christmas holidays. During the tests, the instructors had believed in an alien invasion. I must say, we were all in Math Sup (Superior Math Class)! The three days were in fact reduced to a single night that I spent in snoring and foot smell. And I had so much enjoyed that I took a train as soon as possible for Douai… There, the next train to Lille was the fast “telephone” train (first class only train plus extra fee)! Great comfort in this luxury coach! But I was slightly marring compared to other travellers (businessmen)…

In large size, you will see many calculations on the sheet. Yes, the electronic calculators did not exist. And this drawing dates from before my learning of the slide rule… and logarithm tables.

The BB 16500 is my favourite: I have always been attracted by the ugly ducklings (attention: I speak of vehicles, eh, like the Citroën 2 CV for example, but it did not prevent me to find the Lamborghini Miura sublime). In addition, as you can see in Photos of railway equipment, I photographed the 16794 at the Gare du Nord in 1967. I will dedicate a separate article to it.

USI coaches interested me as soon as they appeared on the Nord network, around 1967, with their Y28 bogies which squarely contrasted on the old Pennsylvania. And they were widely more comfortable than the multi-door Express Nord, although, at the folklore level, the latter far outweighed them. The USI had at least two disadvantages: the air stream, when everyone opened the windows, transformed them into an organ pipe; and the platform sliding doors, with only one pane for the first released coaches, opened in the curves under the centrifugal force effect!

This diagram is wrong for a coach on Y28 bogies: the pitch of the windows should not be constant.

The Dd4s luggage van was called at the time “UIC” van. I started by buying the France-Trains model (before the release of the Jouef), naively thinking that the price involved quality. What a disappointment! The doors were not in the right place, the roof did not fit properly at all. Only the bogies were clearly above the Jouef, but it was not difficult. The Jouef roof, with its folds inclined at the ends, was much better rendered, and there was no gap, since it was moulded with the body.

I found these TA60s of insolent modernity compared to the old TA52 (released only eight years before). Note that I had planned radial axles to accommodate the large wheelbase, long before LS Models! Would it have worked? I don’t know. But I know it doesn’t work on LS Models wagons! 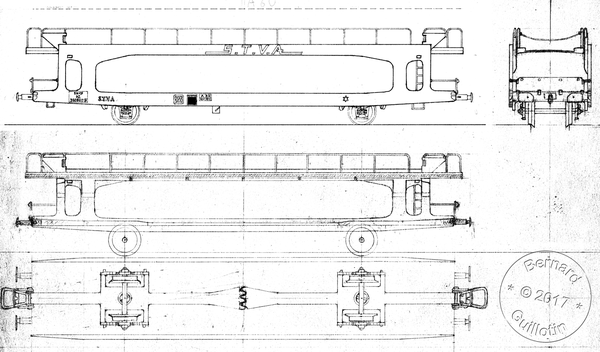 An “art” drawing to finish

But of course copied on a photo! Felt and Rotring. The loco is a famous Pacific Nord Chapelon (231 E). 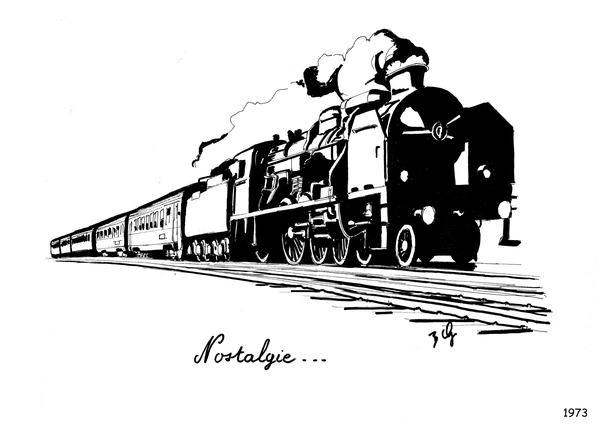