In this section, I retrieve old documents on projects I had undertaken between sixteen and twenty-two. Unfortunately, most have not come to an end. Too much ambitious? Not enough tools? Admittedly, but especially the monopolizing studies followed by the entry into the world of work, living in a studio not suitable to tinkering, then departure abroad. Out of sight…

Here is a typically ambitious project, which could have worked from a mechanical point of view, but which posed problems of selection between the traction motor and the panto’s. You’ll see that I tested several devices, but none really gave satisfaction. I had not thought of the Jouefmatic; But, in any case, this system was too expensive for me and would have been too cumbersome: it would have required two receivers in the loco. Now, with DCC, this kind of question no longer arises.

At the beginning, I planned to equip the Lima BB 17009 and 15001. The latter had the advantage of having only one pantograph. As I wanted sufficiently realistic pantos, there was no question of using the original ones. But they were delicate to make: the fewer, the better.

Here is an example of a plan I drew; there were others more detailed, but I can’t find them again. Yes! Just below! 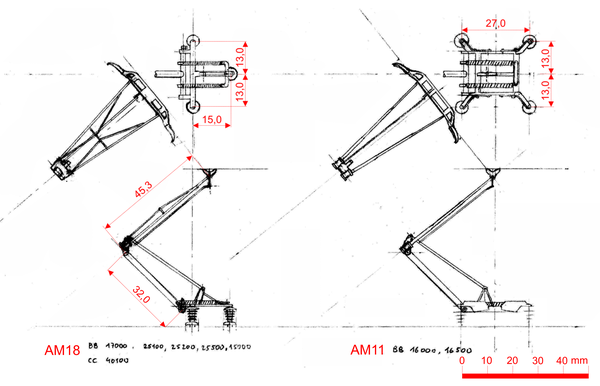 Note: the red texts are recent. I added the dimensions after scanning the drawing, because it is difficult to use a ruler on a screen… 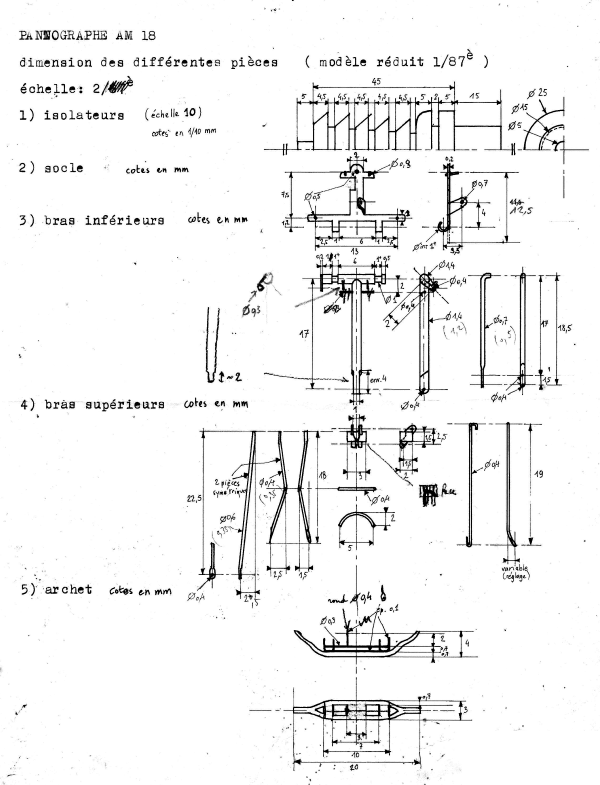 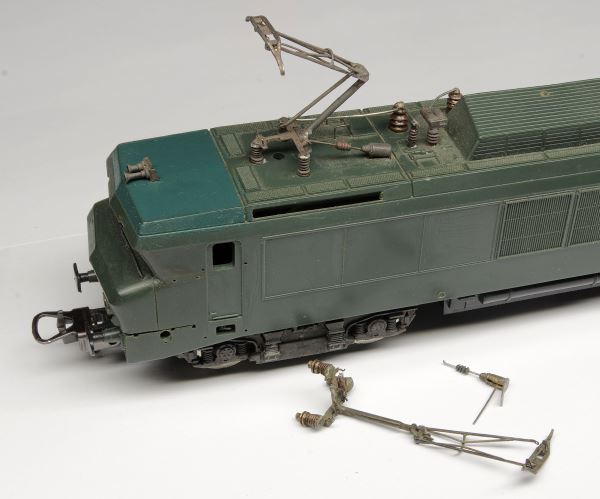 You may have noticed that the installed panto doesn’t have lift springs. In fact, it was an uncompleted “prototype”. The second, complete, is in the foreground, in a sad state because I walked on it… The whole stuff is a little dusty…

Close-up of the pantograph 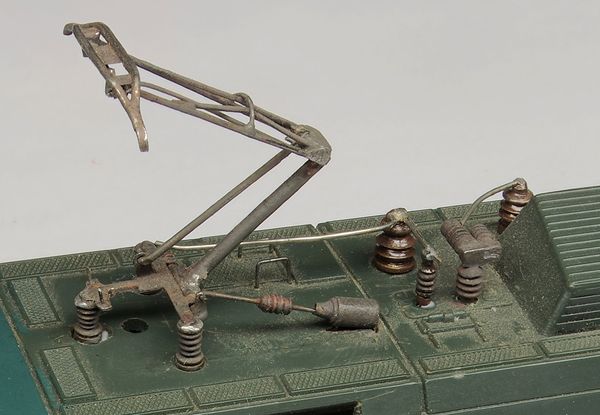 The insulators are made of brass; they were turned with a mini-drill machine as a lathe and cutting tools made with ground pieces of broken hacksaw blades… Bizarre that I did not change the disconnector…

The panto itself is made from a mix of materials that I had on hand, depending on the desired diameters: copper, brass, steel. The chassis is made of tinplate. The “knee” is made in a filed massive piece of brass. I am nevertheless quite proud of this making, especially compared to the weak means involved. To be completely honest, there was a lot of lateral backlash at the knee and I doubt that this panto could hold properly under a catenary without escaping from it.

Close-up of the pneumatic cylinder 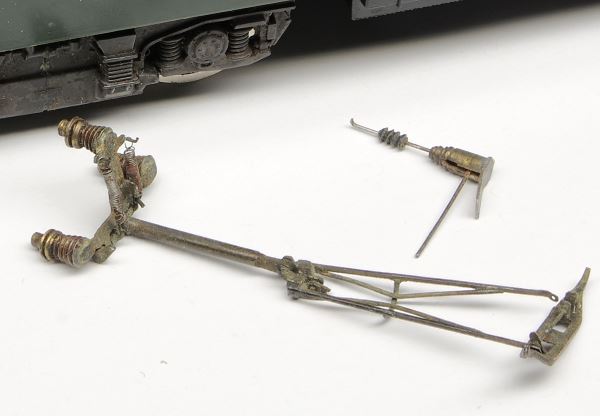 The L-shaped rod slides into the cylinder body slot and enters the loco’s body to be pulled by the mechanism that will now be seen.

The springs are made from wound guitar strings. Usually the wrapping is done in rather soft metal, brass I think. It is the only time I found a material, perhaps phosphor bronze, certainly not as hard as steel but sufficiently elastic to make a spring.

The mechanism, on the other hand, has remained in plan, you can say that. It consisted essentially of a cam whose profile was such that during a complete revolution, the pantographs had to present successively these states: the two lowered; one raised; two lowered; the second raised. On the drawing, the panto on the left is lowered, the one on the right is raised. The oblong hole allows the cylinder rod to move freely when the panto is under catenary, therefore at variable height. 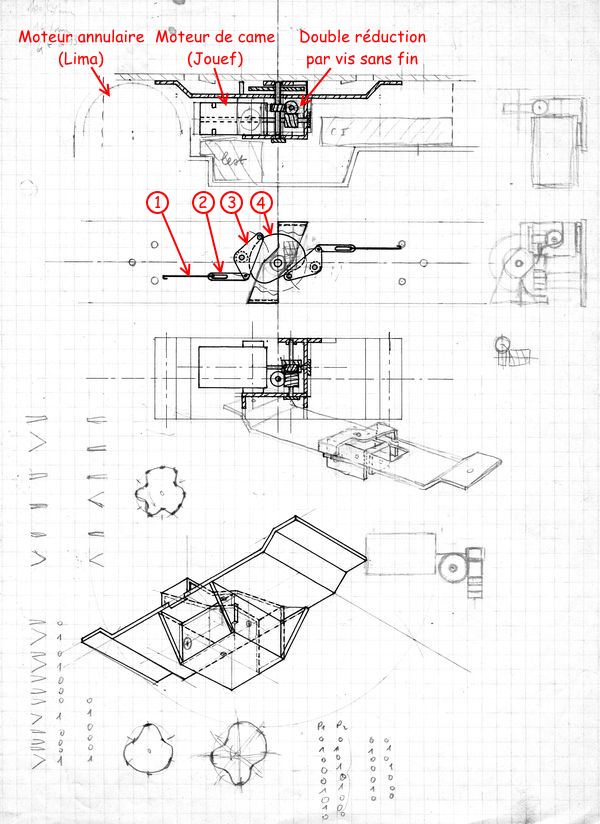 As before, red texts are recent additions.

Obviously, this cam shape was not suitable for a 1500 V DC locomotive, or even bicourant, since it was impossible to lift the two pantos together. Hence, the multiple cam shapes considered which can be seen in the drawing. But I was “single-phased”, so…

I planned to make the mechanism frame of brass. The “tournebroche” Jouef motor was probably not a good idea…

As I said before, I had been thinking about several mechanical or electronic solutions, but in any case it was necessary to be able to switch the power between the two motors. For example, by a Märklin-style overvoltage system, or medium frequency AC voltage filtering. Here is an example of a proposed ratchet wheel switch. 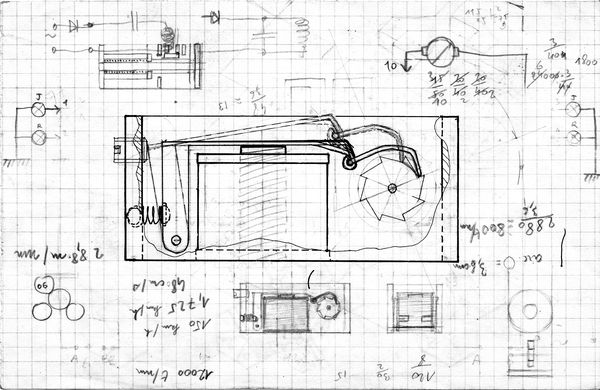 I even planned a small screw for stroke adjustment!

Then, having getting on in my studies, I also tried the electronic equivalent with an electronic circuit like shift register, plus a thyristor for the traction motor, allowing both directions of travel, and a transistor for the one direction pantograph motor.